It seems life wants me to slow down and stop trying to do more than I can currently handle.

I was healing fine from my daughter's birth, but then I got a pretty nasty cold, which was then followed by mastitis. Mastitis is a breast infection with flu-like symptoms that knocked me on my behind. I am still trying to recover, and running on little sleep between the newborn and cough keeping me awake. Breastfeeding has also been difficult and painful, so I have a lot on my plate with just that!

Needless to say, the only thing I've written this month is the birth story, which clocked in around 3000 words. I don't plan to write anymore this month. Not actually sure when I'll start writing again. It's definitely more difficult to adjust to a second child, and the health issues have made things even more difficult. I can hope I'll have adjusted by the end of the year, but I really can't predict. For now, I'm going to concentrate on keeping healthy and tending to the newborn, then I'll slowly add things back in.

I hope everyone else who attempted NaNoWriMo succeeded or at least made a decent amount of progress. I'll try to post another update in December. But if things don't shake out the way I'd like, I send my holiday wishes to everyone!

NaNoing with a Newborn - Part 1: Newborn Has Arrived!

Mama's Little Green Girl arrived on November 5 at 1:46am! Better late than never. And now that I can step back and look at things, she had perfect timing.

This of course means my NaNoing with a Newborn will be getting a late start. I did begin a pregnancy journal right before she was born, and I intend to use the word count from that as well as the birth story for NaNo before I start work on Seeker of Dreams. I mean, it wouldn't be a normal NaNoWriMo for me if I wasn't a bit of a Rebel. ;)

Hopefully by the end of the week I'll start Seeker of Dreams. I've been itching to work on it, but there are just some things that need attention first! I still hope to reach at least 25,000 words for the month. At least I already have 500 in from the pregnancy journal. 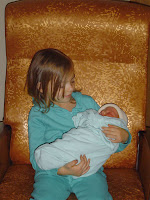 Good luck to all those deep in NaNoWriMo waters already.

I'll leave everyone with a picture of both of my girls, Little Dragonfly and Little Green Girl!

NEXT UP: NaNoing with a Newborn - Part 2

NaNoing With A Newborn?

I am far overdue for an update!

I was hoping my next update would be announcing the birth of my second child. However, she has proven stubborn. I'm still pregnant. =/

So, then why is my post title NaNoing With A Newborn? Well, it was my intention to do a series by that name starting in November. But I need the newborn first! I am actually 40 weeks along today, and since I have gestational diabetes, it's time to force baby out whether she wants out or not. I won't know the exact details until later this afternoon, but I suspect she'll arrive no later than Wednesday, likely sooner.

I thought it would be fun to undertake the challenge of doing NaNoWriMo even with a baby on my hands. And since I need to keep my head in my Dead As Dreams' world (for revisions), I'm going to start the sequel, Seeker of Dreams! The first scene I want to write is actually a birth scene, so I'll be waiting until baby's arrival to start my word count. I'm not too worried about starting a few days late because I think my goal will be more around 25,000 than 50,000.

Good luck to everyone doing NaNoWriMo this month. And don't forget to join Writing Quest - November! I promise my next update will be in no more than a week. ;)

NEXT UP: Birth Announcement (stubborn baby has to come out!) and NaNoing With A Newborn Part 1