I try to attend the Bristol Renaissance Faire every year. Currently it's been with my family, of course (though hubbie and I are threatening to leave the kids with a friend one day next year so we can have a non-kid centric day there - lol). And this year I wanted to share some pictures I took. I think I got some good ones! 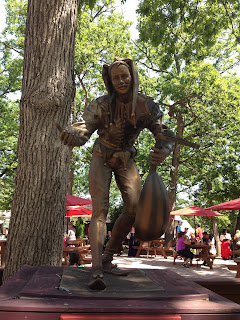 This is the statue of a jester. Don't ask me to report the details on the plaque below it because the day goes fast and my memory doesn't retain such things. 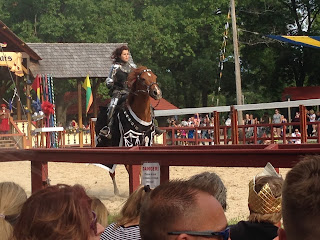 We attended the Joust to the Death. I had fun taking tons of pictures of this. Some are to the right and below. 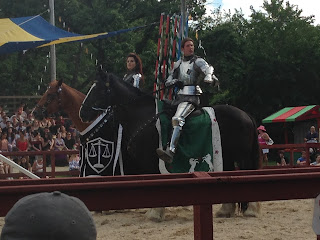 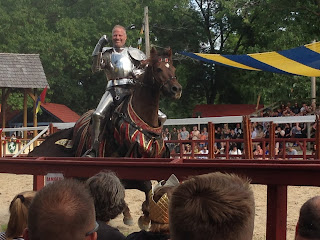 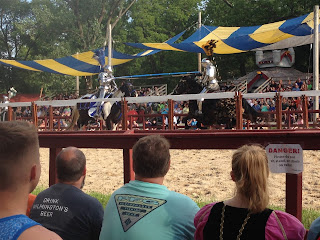 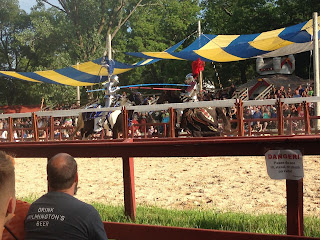 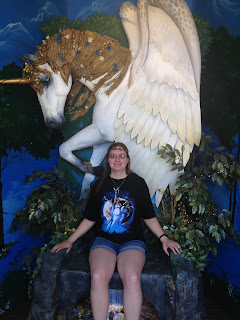 Finally, here's yet another rare picture of me. I mean, I just had to get a picture on the unicorn throne (actually alicorn for those who are picky with that kind of thing)!
Posted by Alexa Grave at 7/26/2017 11:56:00 AM No comments: Links to this post

WARNING: Spoilers! Spoilers! Don't I always have them? You know the deal. If you haven't seen Wonder Woman and don't want things ruined for you (how have you not seen this yet?) then surf away from the page. Come back when you've wised up and gone to see it. Don't give me any excuses either. ;)
❦
Wonder Woman Movie Poster

I feel bad that it's taken me so long to comment on Wonder Woman, since I did see it on release weekend! First, I have to admit that weekend my brain was in a bit of a fog, so I went into the movie with the sole intent on just enjoying it and not analyzing it at all. That was apparent after I came out of the movie and I seemed to have enjoyed it way more than my husband did (mind you, he had some valid points after I thought about it). So, I'm not sure how discerning I'll be in this post, especially since it's been a while.

Funny enough, I never actually planned to go see Wonder Woman. Not because of the subject matter (I love superhero movies and I also love kickass women). DC hasn't had the best track record lately. I never saw Batman v. Superman either. Plus, when I watched the previews for Wonder Woman, I wasn't all that impressed.

But then the movie released to great reviews, and a bunch of my friends raved about it. So, I decided to go, and I quickly realized that they just did a shit job with the trailer (I'm not a fan of the Justice League trailer either - I'm hoping the movie is better than the trailer for that, too).

Wonder Woman was amazing. And I'm happy I took both of my girls to see it - they need strong female role models like this. I even took a picture of both of them next to the movie poster. :D They did a great job portraying Diana as a strong, independent woman. She wasn't dwarfed by any of the male characters at any point, even though I thought most of her supporting male characters were also well rounded.

This movie could have easily made a wrong turn and pretended to be a feminist movie while still condescending to stereotypes and falling into the pit of "sexy woman with a sword and no brain". It didn't, though. And I hope to grab a copy when it releases on DVD so I can take it all in when my head is a little less in La La Land.

Not only was Diana portrayed excellently, I loved the main villain, Ares. I have to admit, I didn't see it coming. I didn't think Ludendorff was Ares, but I didn't know it was Sir Patrick. Usually I see through such things, but this time I was surprised! And it was a good surprise.

I think my favorite part of the movie was all of the Greek mythology and Diana's time on the island. I'm always a sucker for that stuff.

Of course, though the story was strong for the most part, and the characters great, the movie wasn't perfect. My husband pointed out the overuse of the slow motion. It didn't bother me much, mostly was background noise for me since I was paying attention to the story more, but when I thought about it was was probably a little heavy-handed. Comes with the territory for the director. He also mentioned that it lagged a bit when they were in London, and I had to agree with him.

Honestly, I was worried about the World War I setting originally, expecting Diana at some point to be "put in her place" because of the era, but was happy to see that the time period only strengthened her character. I can't wait to see the movie again!

What was your favorite part of Wonder Woman?

What is this awesome thing? He organizes the Self-Publishing Fantasy Blog-Off! (Also called SPFBO.)

This is the third year he's running it. Back in May, he posted a call to authors. He took 300 submissions of fantasy novels (first in series or stand alone). And the contest was filled in less than a week (which goes to show just how well the first two years went).

Luckily, I managed to submit Mind Behind the Mind (Trinity Torn, 1) to the contest. Now, there are a lot of great contenders out there, and the chances of Mind winning are beyond slim, but I figured I'd take a chance and at the very least come out the other end with a review. I considered posting about this sooner, but the official start date was July 1.

What's the contest all about? Well, 10 bloggers have graciously volunteered their time to judge the entries. Each blogger receives 30 titles. Out of those 30 titles, they narrow it down to their single, top title. And then all 10 bloggers read the top 10 books chosen to pick the winner!

Take a look at the Phase 1 post on Mark Lawrence's blog to see all of the titles and which blogs they were assigned to. You'll find Mind under the Fantasy Book Review list.

You can also find a compiled list of all of this year's entries on Goodreads! I've already added several titles to my To Be Read pile (I seriously need more time in a day).

And if you'd like to keep track of the reviews all in one handy place, you can do so HERE.

I wish all of the entrants good luck, and I also send out a great big thank you to Mark Lawrence and all of the bloggers who take the time to make the SPFBO as awesome as it is!