It's been a pretty rough month as far as writing goes. I was pretty sick for almost two weeks, and then after that I had to catch up on a beta reading job (which I also wasn't able to work on while sick). And once that was done, we were already in the middle of painting the living room and dining room!

Needless to say, my brain is melted and completely scattered. We're two days out from finishing the painting, but we still haven't completely put the two rooms back together. This is taking a while because I'm trying to make sure everything is cleaned and organized before it goes back. Unfortunately, that includes a bunch of toys that are rather a mess (I keep imagining the day when the kids are older and we have so much more room in the house because we won't have all the toys to deal with).

So, I figured it would be a good time to have a nice, simple blog post. Yeah, that painting I mentioned. Before and after pictures! I know I should have posted these on Instagram, but silly me didn't think of it until I already had the blog post planned. One of these days I'll get a handle on all of my social media (maybe).

Living room first. Hubbie had to do a lot of patching in both rooms -- I mean, they likely hadn't been painted since the 1960s, long before we ever owned the house. 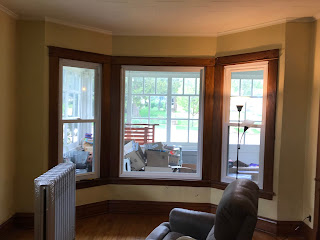 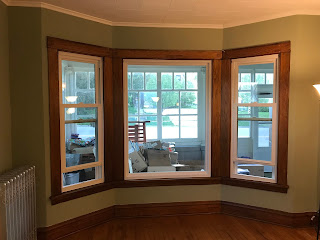 Wall where we usually have the TV. 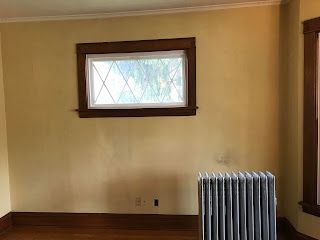 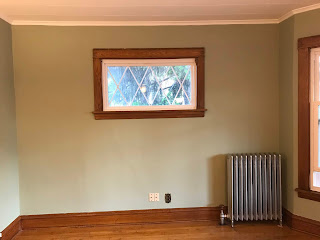 And leading to the hallway/front door. 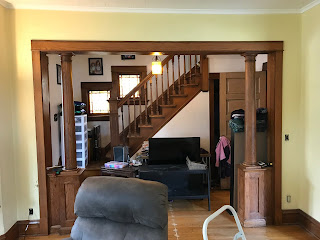 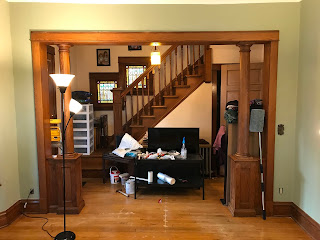 Since I took the after pictures when it was a bit dark out, the lamps are making it look yellower than it is. I can't get away from the yellow -- it's trying to soak through! Lol.

Looking in to the living room. You can see the green better in these after shots because of the lighting. 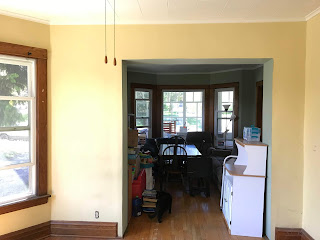 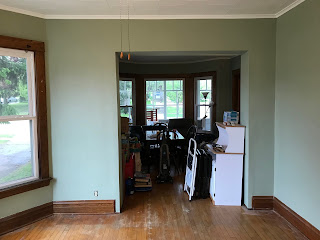 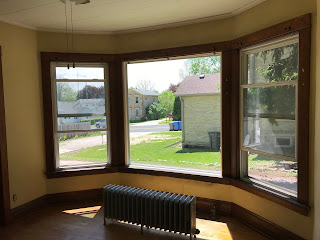 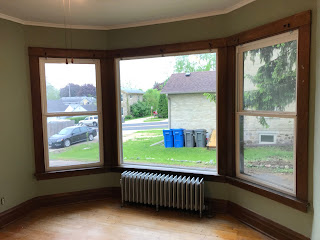 Wall shared with the kitchen. 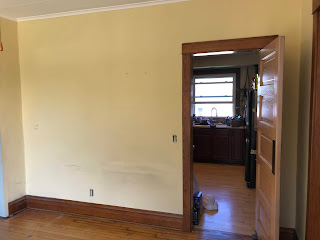 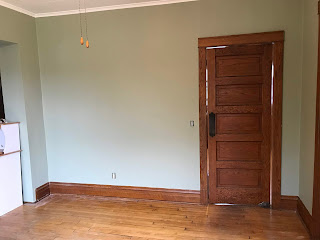 And there we have it -- from yellow to green. =) I'm so happy we finally painted these rooms. Computer room and front hall will be next! Hopefully this year still, as long as Hubbie doesn't revolt -- lol.
Posted by Alexa Grave at 5/29/2019 02:30:00 PM No comments:

***WARNING: Spoilers ahead! As this post has been delayed a bit, I seriously hope you've seen Avengers: Endgame already. If not, though, this is your friendly warning that there are spoilers up ahead. This movie is hard to talk about without spoiling anything!***
❦
Avengers: Endgame Movie Poster

Hubbie partly didn't want to see Avengers: Endgame because he was afraid they wouldn't deliver the pay off after so much build up from the previous Marvel Cinematic Universe (MCU) movies. I understood his trepidation, but my eagerness squashed any doubts of my own. And I'm happy I went into the movie without that fear because they did a marvelous job of bringing The Infinity Saga to a close (and Hubbie was worried for nothing).

The clear focus of Endgame was to wrap up the story arcs of many of the Avengers -- the ones we've seen grow over several movies. Now, I would have loved to see more Captain Marvel, of course, but I know her story is just beginning, and we'll get plenty more of her in future movies. So, it was nice to see the focus on Iron Man, Captain America, Black Widow, Hawkeye (Ronin), Hulk, and Thor. The ends of their stories needed to shine instead of being taken over by the newer Avengers.

Not only do we definitely see the endings, we're reminded of the beginnings as they travel back in time. This was an excellent way to show how far they'd all come. It felt like things were coming full circle. And certain experiences when they visited the past had direct impact on their decisions at the end, especially for Tony Stark and Steve Rogers.

Now, I know some people aren't sure what to make of the time travel logic in Endgame. They insist it's not like Back to the Future, but it is a lot to wrap your head around. Part of me thinks they tried to make it too complicated so most people would just give up trying to figure it out and accept it as is (that's pretty much where I've landed -- OK, whatever -- lol). I also realized, after a lot of thought, that this was their way of introducing the Multiverse.

I mean, every good ending also has a new beginning in it, right? They might have ended the stories of some of the characters, but they needed to get the next major arc going, and I think they opened the door just enough to the idea of the Multiverse without leaving people flailing.

Not only did they set up the Multiverse, but Loki's soon to be Disney+ series as well. Even before the directors mentioned that Loki's little escape act with the Tesseract splintered off a new timeline, I realized that that was going to be the whole start of his new series. Super excited about this! I honestly hope that many of the MCU series they have planned for Disney+ will have to do with the Multiverse and alternate timelines. Who knows, for all we know they planted several other seeds in Endgame that we won't realize until later.

Now, well I felt the movie was well done and a fitting end to The Infinity Saga (though supposedly Spider-Man: Far From Home is supposed to close out Phase 3), I did have some qualms.

While I'm all for the female Avengers banding together and fighting as a group (I really, really want more female led MCU/superhero movies), I felt the scene where they all faced Thanos together was a bit too contrived. I'm not saying it shouldn't have happened, but I wanted it to feel more natural, just like when several of the women were fighting together at the end of Infinity War -- that scene worked far better than the one we had in Endgame. I just hope that if the rumors about a female ensemble MCU movie prove to be true, that they gather in a way that makes sense and doesn't feel forced. If done right, it would be amazing.

My last two issues are more worries for future movies.

We all know a Black Widow movie is coming out, which will be a prequel. In Endgame, we see Black Widow sacrifice herself. This is a heart-wrenching moment, especially since she's clearly become the glue that holds everyone together over the five years after the snap. But my major worry is, now that Black Widow is dead, how will a prequel fit into the next MCU story arc? One of the best things about the MCU movies is that they're all interconnected, parts of a whole. And I really do hope that they find a way to integrate the Black Widow movie into the the next arc instead of it feeling like more of a stand alone (and afterthought).

On the other hand, I'm looking forward to them searching for Gamora! And since it's not the Gamora who was in love with Star Lord, they'll have to go through the whole relationship building again once she does join them. They needed to bring Gamora back, and I'm glad the Multiverse has allowed for that possibility.

That was a lot to unpack. And man, I'm sure I could touch on so many other things, but I think I'll leave it here.

What do you think? Did Avengers: Endgame do justice to the end of the MCU Infinity Saga?