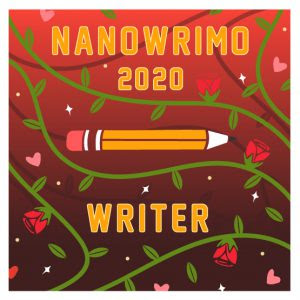 No, no, I'm not saying NaNo sucks, although some people might think it does (NaNo Crud sucks, and I really hope it stays away for me this year). I'm talking about word bites!

So, I'm undertaking NaNoWriMo again this year. I've been on another 3-month hiatus due to kids and health, and I am mad with the need to write. And during my hiatus my brain decided to spawn an idea for a 13-book series. Yup. I'm crazy. And I should be working on all the other projects on my to do list, but here we are...

I don't expect to hit 50,000 words. I never have, and I suspect I never will, at least not until both kids are out of the house, but by then it's likely I'll have another job or two, so yeah. =P I'll definitely be trying my best, though.

My NaNo project for 2020 is called Gemini's Echo - the first in a series titled Zodiac Aegis. It's looking like it'll be New Adult Urban Fantasy.

This year I'll be taking a different approach. I won't be integrating my usual meter into the post. Instead, I'm giving myself stickers!

I have 100 NaNo Bites I need to take. Each Bite is 500 words. So, I made myself a handy little chart in Google Docs, which means I can share it with everyone. I'm going to try to do a thumbnail here in the post, but if it for some reason doesn't work nicely for everyone to view, you can use this link to take a look: NaNo Bites 2020.

How many unicorn stickers do you think I'll get this year? I'd love to see people make guesses on how many words I might reach! I already have two as of this post... and I'm like 37 words away from my third - lol. No more writing until later tonight again, though. Unfortunately, I have to adult and pay bills, balance accounts, and deal with kid homework.

Also, Eldest is home for the week doing virtual learning (was informed of this on Saturday), just to make the start of NaNo more difficult. Though this year, she'll be joining in on NaNo with me! She's participating in the NaNoWriMo Young Writers Program. Her goal is 5,000 words, but she might raise it if she plugs along faster than she expected. I've also told her she can play 30 minutes of Genshin Impact during the week (usually it's weekends only) for every 250 words she writes. Wish her luck!

Speaking of Genshin Impact, I'll need to resist the call of that game and others if I want to get more words down. Happy NaNoing everyone!