I still have a "residency hangover" (no, this does not involve alcohol, but spending a whole week with my fellow crazy writers and then NOT being around them anymore, well it does something similar to the body), but I promised a post-residency entry, so here it is!

I thought it would be nice to post some highlights with interesting tidbits. I'll touch briefly on three classes--Warfare for Writers, Map Quest, and The Fire In Fiction.

Mind you, all of the classes were a great help, but I figured touching on only three would give everyone a taste at least. =)

Warfare for Writers was taught by my awesome mentor, Timons Esaias. He is a fount of information, especially when it comes to the technical side of things. He did not disappoint. I took four pages of notes, and I still feel like I missed some important things he discussed. He is also writing a book on this very subject, so keep an eye out for it if this is a topic you're interested in!

So, I give you four of Timons Esaias's sword no-nos (yes, I have accidentally broken at least one of these rules in the past): NO swords on backs, NO swords in the sun, NO tensing on the grip of a sword, and NO flipping and rolling the sword for show, especially on horseback. If you think carefully, you'll understand exactly why these are no-nos.

Do you know of any other mistakes writers make when dealing with swordplay?

The lovely Maria V. Snyder taught Map Quest, a class I sorely needed. First rule of creating your world: no square maps! Oops. She offered many other helpful tips, and I will be referring back to my notes soon when I map out the world of Bodhira for Dead As Dreams.

One thing that we fiddled with during class was creating a map from scratch without a story in mind already. The resulting map may or may not actually give ideas for a story or novel. I know when I wrote my will-never-see-the-light-of-day novel in high school, I created a map of my entire world (yes, it was square, well it was 8 1/2 by 11), even though the novel only took place in two of the kingdoms. By drawing out all thirteen kingdoms of Chyraine, though, the map itself spawned two other short stories, and maybe more in the future. It's amazing what a single map can kindle. ;) If you'd like to try the exercise we did in class, you can visit Holly Lisle's website.

Also, a few tools for map creation were discussed, including the Civilization games. Sure enough, my husband's copy of Civilization III has a random map-making tool. This could be useful for me. Then again, I could get sucked into playing the game!

Do you have a hard time creating maps for your worlds? What do you find the most difficult?

Finally, I wanted to give a mention to our guest speaker, Donald Maass. He spoke in connection with his book The Fire in Fiction. And he made us work! We had two sessions with him, totaling around four and a half hours, and he threw tons of questions at us. I couldn't have been more pleased with what he was asking. His main focus was on bringing our characters alive to tell a good story. Those questions he threw at us were about our characters and our worlds, challenging us to dig deeper, explore further into the stories we've created. I wrote down all the questions he asked, and I intend to use them with every novel I write. You want to create depth? Well, if his book is anything like his talk, buy it!

Here are four of my favorite questions: Can the protagonist want the opposite of what she usually wants at the same time? What would it mean for the protagonist to fail in the story (what would be unredeemable and permanent)? What will the protagonist do to keep her big secret? Who's the person the protagonist most needs to forgive, and why is it impossible to do so?

What questions do you think should be asked of every protagonist or every story/world?

Overall, I learned a lot during this residency, and I am sad that it was my final one. However, I do know I'll have the chance to learn even more at the In Your Write Mind Retreat every year!

Please note the questions I asked throughout the post. I look forward to seeing what other people think about these subjects. Happy writing, all!

NEXT UP: Monthly Update

11 Hours In a Car...With A Preschooler

Here I was all ready to tell the story of my horrible trip with my 4-year-old, but she did the worst thing she could do.

She failed to give me an interesting story. =/

We left for my writing residency in the wee hours of Tuesday morning. I had a book to read, but I figured I wouldn't make as much progress as I needed to. However, I only had 40 pages left to read once we reached our destination!

The first hour, she slept. Then we had to make a stop. Not long after she was asleep again. She did wake for some time and talk a bit, but she didn't fuss or whine. And on the last leg of the 11 hour journey, she napped again.

Not a terribly compelling story, I know. And since my husband was driving, I was allowed to get engrossed in the book I was reading, and forgot to take any pictures of the countryside as we drove, so I don't even have a picture to post!

Perhaps she'll make our trip back more entertaining. Probably, since by then I really won't want her to!

So, I leave you with one thing that came out of the long car ride. Go read Hunger Games! No, I haven't seen the movie, but the book is always better, and Hunger Games is a damn good book. ;)

NEXT UP: Post-residency Report

A scent invaded the Shepherd of Dream's nose--rotting foliage, wrongness--right before she slipped from the Nexus and into a dream, where another stench kicked the first one to the back of her mind. Ale. Not the sweet smell of it when it was freshly poured, but the nose-wrinkling fumes floating off the breath of someone who was drinking too much.

She reeled, covering her mouth with her arm, hesitant to venture further into the dream. She had to, though. This was why she existed, to improve others' dreams, in hopes of affecting their waking lives. At least that's what she thought. She'd never had a guide, no instructions on what to do when she first realized she could live in dreams and manipulate them. She was surely the will of Muska, Mother of Dreams. It was the only explanation.

From Dead As Dreams, Chapter 1 (novel currently in the revision process)

NEXT UP: Traveling to Writing Residency with a Preschooler - 11 Hours in a Car!

Magic is Reality, Reality is Magic: The Pentacle

Graphic By Nyo The pentacle is an upright 5-pointed star surrounded by a circle. This is a symbol used often in ceremonies by Pagans and Wiccans. It can also be worn around the neck as an amulet, much like a cross. As a matter of fact, it's associated with the cross in another aspect--it's a symbol of protection. The points of the star can also represent the 5 elements; earth, air, fire, water, and spirit.

To learn more about the pentacle, as well as some other symbols that are similar, please visit: Symbols of Wicca, other Neopagan traditions, Satanism, etc.

Today my necromancer, Morrigann, will all show us how much fun she has at a beach party! 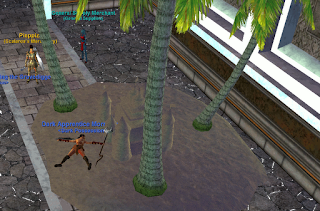 It's always fun of course to start out by sunning on the beach. The necromancer has a distinct advantage when tanning her back, however, due to only being able to FD in one position, her stomach is still stark white. ;) The half and half look is in this summer with most necros, but it doesn't much matter when their robes cover up their efforts! 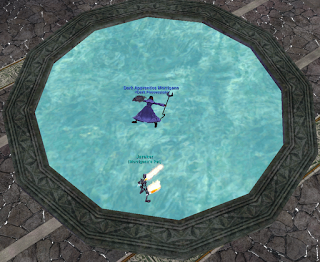 Morrigann decided it was time to take a dip in the pool! She's excellent at the dead man's float. Wait, she has her robe on.... Perhaps she isn't just floating around. Drowned? You never know with necros. Her skeleton pet does seem to know the secret to walking on water, though. Maybe she accidentally swam into one of his wicked fire blades!

What would a beach party be without some indulgence in spirits? Ale, Gnomish spirits, wine--Morrigann had quite a mix of alcohol. And I think she went overboard. She's fallen face first into the fountain! 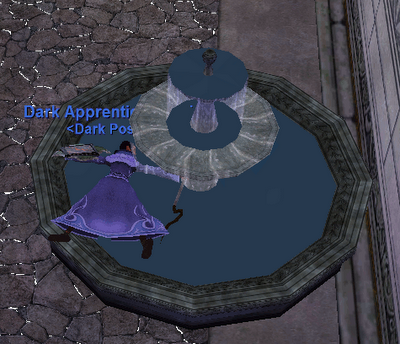 NEXT UP: Magic is Reality, Reality is Magic - The Pentacle

FUTURE POSTS: A new post every Wednesday, occasional SFFS Snippets, monthly status updates (the first of every month), a gamer's lexicon (so you know what the gamer in your life is talking about!), classic Voltron plot holes (for fun!), and much more!