Happy/Blessed Halloween/Samhain everyone! (And happy four year anniversary for my hubbie and me.)

This is going to be a BIG and BUSY week for me. First, World Fantasy Con starts on Thursday. I have some great news, too - I'll be reading at the Broad Universe Rapid-Fire Reading on Friday at 11am. Asking to be put on the waiting list was a great move for me, since it seems someone had to drop out. It's only 4 minutes of reading, but it'll be fun. :) Also starting at midnight tonight is NaNoWriMo, but I will talk about that more later in my post.

I suppose I should mention what I completed off of my goals list last week. Well, I was kind of eaten up by the Party Prep Monster. A bunch of little things didn;t go as planned, so it sucked up more time. All I managed to get done from last week's goal list was about 1.3k of the short story, and then I realized it was going to be longer than I expected - already on page 19, and I'm maybe a third of the way through. So, that story will have to wait to be finished until after NaNo (and after that novella - I need to do a rough draft so I can get crits and revise it before the submissions deadline - eep!).

With that said, here are my goals for the week:

It's all doable. I think. I hope. We'll see. Of course the house needs to be cleaned again because the party made it dirty. Always a sign of a good party. :) Although Chun says at least one person has to throw up for it to be dubbed a good party...hehe.

Okay, NaNo time. Tonight or tomorrow I will add a new counter to my blog. It will reflect the same counter on the NaNoWriMo page. I might keep the weekly word count goal thing up until I finish that novella rogh draft, otherwise it will be removed until NaNo is over. I'll also try to update my blog everyday with my NaNo status. I might slack a bit during WFC, since my laptop internet connection might be crap at the Con (it was when I was there for WisCon, so who knows). I am hoping the Con will energize me and get some momemtum going for NaNo.

Hm, anything else to mention? Nope, don't think so (oh, accept for getting another agent query rejection on the day of my party...good thing we had alcohol - lol). Happy writing, and good luck to anyone else doing NaNo!
Posted by Alexa Grave at 10/31/2005 01:25:00 PM No comments:

Okay, so here is what I accomplished last week (in between having to take the kitten to the vet because she has an upper respiratory infection, plus having to give her a bath because she had poo smushed into her fur - Roland was never this much work):

Not as much as I wanted to get done, but such is life.

This week, on the other hand, is the week of my big Halloween party. Okay, it's not so big, but I do have a lot of preperations to do for it, especially since the house still isn;t fully cleaned. So, this weeks list for writing, I know I won't complete it all, but they are things I need to work on, so we'll see what I get done. Chun will be coming in on Friday, so maybe he'll encourage me to get more done while he's here (after I make him help me carve pumpkins - lol). Here goes:

Long list, I know. As I said, I don't expect to finish it all.

Okay, it's not as if I haven't done anything, it's just I haven't accomplished as much as I've wanted to. Road blocks keep getting thrown in front of me. :( If it's not the kitten, it's calling about my student loans or freaking out because Spy Sweeper said I didn't renew even though I did in August (and being on hold with them forever). Sigh. This is what I got done so far:

It looks even worse when I type it. :( I haven't even had a chance to add one word to that short story. I did get some cleaning done, which is good, but I really need to finish that story.

Goals - maybe this will help

Okay, I am going to post my goals each week, and then at the end of the week (or beginning of the next week) I will post what I actually accomplished. My reasoning is that if I make my list public, it will encourage me to get it done so I don't humiliate myself. I'll only do this goals on blog thing until I get back into the writing habit. So, for this week:

Those are just the writing goals. No one needs to hear all the cleaning and halloween party prep that I need to do. Wish me luck, and I wish everyone luck for their writing goals during the week!
Posted by Alexa Grave at 10/17/2005 02:20:00 PM 2 comments:

Well, this week flew by fast, and I'm not actually sure where it went.

I do know where most of my energy has gone since Wednesday. 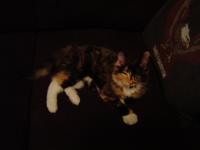 Meet Amara. Her name means unfading. She is our new addition to the house (which puts our cat count up to three). At the pet store she was so timid and inched away from us. I was like, oh, she's so sweet - she'll be a nice, quiet little kitty. Well, I should have learned my lesson with Roland. Amara is a little spitfire (who just yanked my mouse off the desk - sigh). I am expending most of my energy keeping her out of trouble. Not to mention, when I try to type, she tends to want to walk all over the keyboard. I know, I know, the last thing I needed was yet another thing stopping me from getting words onto paper (or into word doc). What can I say, my husband and I are impulse pet buyers. :p Our other two cats are none too happy with the situation either.

So, I haven't gotten much done in way of writing this week. I have a few crits to finish, and I might just have to lock the kitten up in the bathroom to get them done...my study is her home while the other cats get used to having her around and so she doesn't destroy the rest of the house when we can't watch her. That makes things difficult. One good thing about her as a distraction - I haven't played EQ much, haven't logged on in two days, as a matter of fact. And having the kitten is encouraging me to clean the house, so she has less junk to get into. :)

Okay, I think that's all for my post right now. I have a Roland growling at an Amara - he's jealous because she's playing with HIS toys. Who needs children when you have cats? Happy writing, all!
Posted by Alexa Grave at 10/14/2005 10:04:00 PM 1 comment:

I'll get to the title of this post in a moment, but first some general, boring updates. This week was rejection week - joy! Monday I received the last query rejection (my initial thought being, at least I didn't get it on a Friday). Tuesday I received a rejection for "Suicide Woes." After that rejection, it struck me, I had nothing else out in circulation. At the moment I opened the letter on Tuesday, I knew I wouldn't receive another rejection because there was nothing out there to reject. Am I weird in saying, I kind of felt like a deer caught in headlights? Guess I'm admitting my masochistic side.

So, today I sent out "Suicide Woes" and "Prince Upon a Black Horse" to new markets. That means I feel a little better, since I know I can get my Friday rejections again. :p I haven't done any queires at the moment because I e-mailed a friend with a few questions about a publisher I'm considering sending the novel to. And I signed up for NaNo - yay! I will be working on Shepherd of Dreams. Can't worry about that though until November 1. Too many other things to get done before then.

No, my word count hasn't gone up this week. Monday I spent most of the day working on a crit and cleaning my study (the papers might not be organized yet, but having a clean place to work in feels good). Tuesday I felt like poo, so no work got done, Wednesday I still felt like poo and did scans, and today, well, I already mentioned I was working on submissions - it takes a lot of time to pick one from the list at ralan.com, then to make sure I didn't make a big oops in the cover letter.

As for the title of this post. I think so many of the little things have been holding me back lately. I have so much to do that my mind starts to panic, but the thing is, especially with the writing, it's mostly a bunch of little things, and that's why the list seems so long and overwhelming. I've been intending to make a list of all my writing projects (or languishing stories that should be in a slush pile somewhere), but I've been putting it off. I think it needs to get done, along with some of the other smaller stuff I have been putting off, which eventually make them into big things. So, for the rest of this week, I'm not going to be concerned with word count. Instead, I'm going to make myself that list, so I have something to focus on and check off once I finish it.

My goals for the rest of the week: create a writing list, including what stage in the process I'm in with my stories and novels, update my website, including something on the sad, sad tips and promts page, finish a crit, and plan next week's goals. I know it doesn't seem like much, but those little things are beginning to get overwhelming to the point that I'm choking on my worry.

I also have to keep reminding myself that writing is more than just getting words on the page. Word counts are great, but those don't show the time spent trying to network with other writers, preparing submissions, critiquing, allowing ideas to formulate in my head, reading magazines for market research, reading books, among the other number of writerly things. I think I've been giving myself a guilt trip too much over the low weekly word counts. I need to clean out some of the little garbage that piled up while I was working on my thesis before I can get my fingers moving again with my current rough drafts.