Sorry I haven't posted in a while. I've been diligently making progress on several things, though. The first draft of Well of Solitude (Fortunes of Fate, 7) is complete, and I've already received some critiques on it. Revision and release likely won't happen until 2020 for that. And I'm also doing a final round of edits on Thorns Entwine the Blade (Trinity Torn, 2) for the November 13, 2019 release! And other little boring, writerly tasks...

Oh, and NaNoWriMo is coming up!

But this post isn't about writing all the words. It's that time of year again - the time of year I love. Unfortunately, this year I've been having a hard time enjoying Halloween, per usual. Worrying about other stuff tends to do that.

However, we've already had our Halloween party for the year (which reminds me, next year we won't be hosting one - maybe I'll be posting Halloween related pics from Disney World, though), which means I have a handful of pictures to post.

Not too many are below. None of me again. I stuck on my cat ears and tail and called it a year, so only got a family picture instead of an individual one. As I said, it's been a little rough getting into the Halloween spirit. 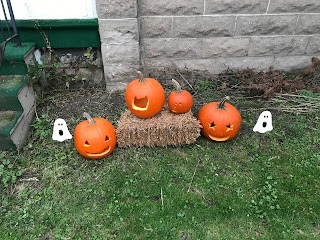 Pumpkins, pumpkins! Nope, jack o' lanterns! Mine is the starry-eyed emoji face one, and the 5-year-old attempted her first pumpkin carving on her own (which one do you think it is? - lol). My eldest was lazy with the cat head, whereas Hubbie was lazy per usual with a simple face. 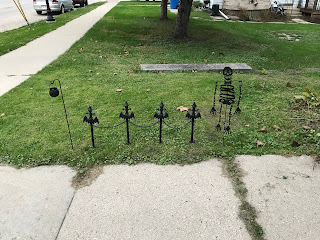 New little bat fences this year. I figured it was time to add something new to the outside since I usually don't have too much set up there. I'm not a fan of the huge inflatable things, and every time I consider putting up some gravestones I decide against it, so I went lower key with the bat fence on each side of the walkway. Dollar Store purchases, but I don't need anything fancy! 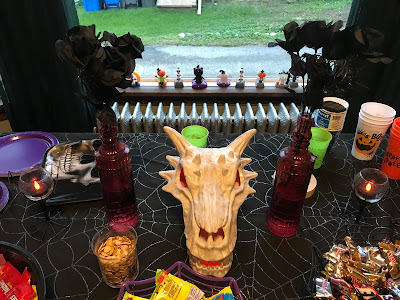 This was my favorite addition to my decorations this year. There was a unicorn skull as well (I'm obsessed with unicorns, so it was hard to resist and choose between them), but I ultimately chose the dragon - look at the fire!

I hope everyone has a happy and safe Halloween. Don't forget to find a black cat to cross your path for good luck (yes - good luck - poor things get a bad rap, and I can attest that our Nightshade is just derpy, not unlucky)!