Yes, it's been ages since I've posted again. I know I tend to try to stick to writing topics when I post, but this time, I'm going to allow myself to go off topic.

Life has been piling up on me - the shit has hit the fan (might be a cliche, but a fitting cliche nonetheless). First it was the unexpected medical bills from the c-section and transfer to a hospital for Alexa's birth. Those won't be paid off for a while. We had already slotted our tax refund for a new comp, which in hindsight, we really shouldn't have gotten the new computer (or the PS3 that I had promised my husband for Father's Day - he won't be getting a Father's Day present for another 10 years!).

The car had some trouble and I'm still paying that off...and we don't even have that car anymore now! Last week Tuesday my husband was rear-ended. The car was 10 years old, so it wasn't worth much to begin with, and the damage was $3500 so it was considered totaled and we would have gotten hardly anything from the guy's insurance even if he would have admitted that the accident happened (my husband was not too smart and didn't get a police report - the other guy claimed he called 911 and they said they wouldn't come out unless there were injuries). So, this past weekend, we spent all Saturday at a dealership about an hour from home - they had a deal going on where ANY trade-in was worth $4200. We left the place with a 2006 Kia Spectra for $12k after taxes, and a new monthly payment that we really can't afford.

And my student loans kick in in October - did I mention that?

Oh, and I am funneling money into stuff for my best friend's wedding - dress, shower, shoes, hair, make-up - argh.

AND the siding on are house would set us back $23k. After the car fiasco, there's no way the siding can get done, and I don't think we could even get a home equity loan for that much even before the car fiasco. We need to get the roof done though, and the rest of the windows in the house will cost $3.5k. I don't know what the roof will cost yet.

Worrying over if we can pay all our bills each month exhausts me. I don't get anything done. It is a horrible inducer of writer's lack of motivation (because remember, I don't believe in writer's block).

To top things off, yesterday morning I found blood droplets all over the house (at least we have mostly wood floors for easy clean-up)...it turns out our oldest cast, Pikachu, was bleeding - her front, right paw. It kept breaking open, and she was still bleeding today, so we took her to the vet. My initial thought was, great more money - how did she hurt her paw - the credit card is really going to feel this. When we finally got her in, the vet said it was a tumor that had gotten so big that it finally broke the skin. They could have attempted to remove it, but half her paw would have gone with it, plus if there was one tumor, there were likely more inside her. After my husband talked to his mom (we needed a level head), he decided we would put Pika down. Needless to say, I had started crying right when I found out about the tumor, and I'm still having a hard time not crying. We are going to have her cremated so we can keep her ashes.

Things have been horrid. Miserable. Writing is just not possible right now. I feel numb, lost, like I'm stuck in the worst nightmare.

I know I should be happy for what I have - our little girl is healthy. But I just keep thinking that the shoe is going to drop again and wondering when it will.

Before I close this entry, I'd like to list some things I remember about the Pikachu, in hopes that if I forget anything in the future, I can at least come back here to remember:

- when she was younger and slimmer, she loved doing her quick attack down the hallway
- she was our Squeaky Piky, Princess Pikachu (she was Peasant Pika for a while since the baby is now Princess), Fat Tabble, Poopy Pika, Tabble Cat, Waddles
- she LOVED marshmallows (I even made her a bowl that said Got Marshmallows?)
- she used to sit up like a bunny on her haunches
- she also loved cotton balls (and supposedly my husband's sister's barbies' underpants)
- when she was tussling with the Roland, she'd always fight dirty and go for the crotch!
- she was our lap kitty and our foot warmer in bed
- she loved attention from us (but she wasn't too happy with strangers)
- when my husband brought her down from up north, she was under his car seat most of the way
- She had this one whisker that curled weird
- she also loved yarn/yarn balls (she had to be a little cliche - the marshmallows were weird enough), but we had to stop giving them to her because Roland would chew it in half, right down the middle, and then chew in the middle of each new piece 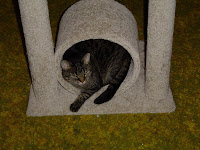 I also have a picture. This will take me a while to get over - she will be missed a lot.

And I don't promise that next time I post it will only be about writing. I don't think my life is stable enough right now to make such promises. If anyone knows of any good work-at-home job, let me know! Sigh.