With every new Marvel Cinematic Universe (MCU) movie, I seem to have a harder time gathering my thoughts and writing up my opinions. This may mainly be because I go into them now with the pure intent to have fun, relax, and enjoy myself. So, being critical can be hard!

What am I getting at? You're probably not going to see a lot of critical commentary here on Spider-Man: Far From Home. I stepped into the theater expecting a fun, humorous superhero flick, and that's exactly what I got. It's actually kind of awesome how even though the MCU movies are all connected, you can head into one knowing what kind of mood to expect depending on what the focus is -- not every MCU title has the same mood. Spider-Man lends to humor, teen angst, and action. It really does tickle my funny bone, and I love that.

Also, as a side note, I have not yet seen Spider-Man: Into the Spider-Verse. I've been meaning to, and I'm excited to watch it, but just haven't found the time. So, no comparisons between that and Far From Home in this post!

I guess I should start talking about the movie, right?

Hands down, my favorite character was MJ. I mean, are you all that surprised? If you've read any of my past posts about MCU movies, you shouldn't be. Anyway, I know some purists want the "typical" MJ, but I'm definitely a big fan of this version. She's not the damsel in distress that's been so overdone. She's smart (yes, she figured out Peter was Spider-Man), headstrong, and willing to defend herself if need be (she grabs a freaking morning star!). And then at the end, it's not Peter rushing to check if she's all right. Nope. MJ runs to check if Peter's all right. I really loved that switch.

Though MJ wasn't what you'd normally find in the comics, Mysterio's fish bowl helmet was plucked straight from the pages, which made a lot of people happy. I'd never read anything with Mysterio before this, but his extravagant costume does lend to his pompous personality in the movie, so it fits. And everybody knew Mysterio wasn't a good guy, no matter how much they wanted us to believe it with the previews. Right when Peter was handing over the glasses, I screamed, "No! You're in idiot! Don't do that!" inside. It was kind of fun how Mysterio created such an elaborate plan to trick Peter -- he not only created illusions with tech, but with his story as well.

I also found myself thinking "Poor, Peter," quite often. All he wanted to do was have a nice, normal school trip. And then we get the mid-credit scene. His life will never be normal again! That will be awesome to see unfold.

But what about the end-credit scene? I know some people missed it! I think it left far more questions, though. My biggest question is how did Talos and Soren play Fury and Hill so well? To a tee! And for how long have they been doing it? But I did catch the hint drop earlier in the movie when Fury said not to invoke Captain Marvel's name -- I found it odd phrasing and wanted an explanation. Well, I got it. Totally makes sense that Talos would say something like that. So, it's when he briefly slipped out of Fury's character.

Honestly, I don't have tons to pick on about the movie. Was it perfect? No. Did I have loads of fun watching it? Yes. And for me, that was my main goal. I was a little disappointed that we didn't get the multiverse payoff, though.

I will say, after all the new announcements about Phase 4 of the MCU, I'm really excited for The Eternals and Doctor Strange in the Multiverse of Madness. Especially the latter one. ;)

It's that time again! Where I post neat pictures of Summoners War Mons that I intend to work on. ;)

Unfortunately, I'm a little peeved with Com2Us right now. I finally opened the Rift of Worlds on my Water/Light/Dark account to access some new content. While I opened that new content, some changes made it so I now can't open the Elemental Rift Beast Dungeons until I get past a higher level of Rift Raid. I'd be fine with that, but now the Bonus Daily Task wants me to go in those Rift Beast Dungeons to earn the bonus 15 crystals each day (in the past, I was able to do Cairos Dungeons that I can easily access). I contacted support, and they pretty much told me I'm screwed out of those extra crystals until I clear R3 of the Rift Raids. My Mons are no where near that point. I have choice words and thoughts about the whole situation, none of them good. =/

I think today is an emoticon kind of day! =P

Anyway, aside from that bit of drama, I've been hard at work on my Water/Light/Dark account. I 6-Starred both Hwadam, the Light Taoist, and Gina, the Dark Mystic Witch as planned. It took me a bit to figure out Hwadam's mechanism, but he's pretty awesome in the right situations, especially in Arena defense. And I love Gina's AE that summons thorns (speaking of thorns, I did finish the major revision of Thorns Entwine the Blade -- onto the consistency edit).

Along with 5-Starring a bunch of other Mons, I also happened to 6-Star yet another Mon. Lyn, the Light Amazon! She's pretty awesome, and I moved her to the top of my priority list once I summoned her. Great as part of my Giants team, and I think she's what helped me finally get past Giants B10 on this account. 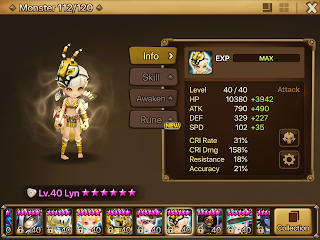 I've also decided I've ignored most of my other Water Mons too much, so it's about time I give them some love and care! This means, my goals for the next couple months will be to work on a select few. Right now, the top two are my Water sisters. These Mons work together to take out the bad guys.<3 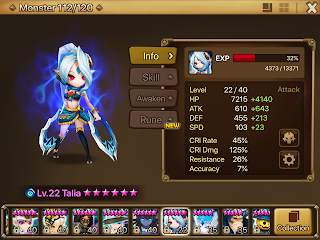 As you can see, I just recently 6-Starred Talia, the Water Chakrum Dancer. She still needs a bit of leveling, of course. Conveniently, I already have her fully skilled up! I'd intended to 6-Star her a long time ago, but got sidetracked with other Mons. Her sister, Sabrina, the Water Boomerang Warrior, still needs several skill-ups and 6-Starring. She's next up. =D 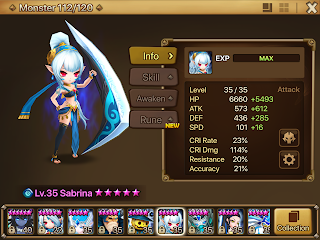 After I tend to those two, it's time for Sigmarus, the Water Phoenix. Like Veromos, I needed to fuse this pretty birdy, and I finally convinced myself to do it. Hubbie thinks he's useful in Giants B10. So, he'll get the 6-Star treatment after the sisters. 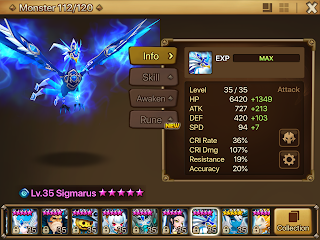 We'll see what else I have time for before my next post! Oh, and I'll leave you with one more pic. I may not have summoned a Nat 5 Light/Dark Mon yet, but during an event, everyone had the chance to earn a new Dark Nat 5, the Vampire Lord Eirgar. I mean, he's nifty looking, isn't he? I've already 6-Starred him on another account. When should I 6-Star him on my Water/Light/Dark account, though? Too many Mons! o.O 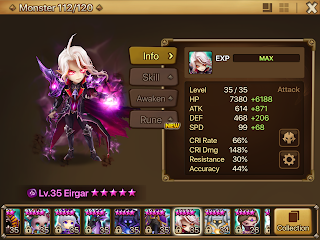