Happy Halloween! OK, I know it's tomorrow, but our annual party and Trick or Treating with the kids has already come and gone (and I get a day off tomorrow -- 16th wedding anniversary). So, I shall regale you all with pictures. You like pictures, don't you? 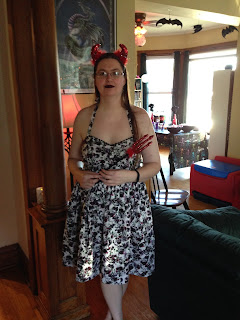 This year, I cosplayed another one of my own creations! The idea grabbed hold of me when I was writing Hell On Wheels. Yup, I decided to dress up as Moira, stuck unhappily in her Welcomer garb. Well, my costume wasn't quite as skimpy as what she has to put up with (I couldn't bring myself to squeeze into a sequined bikini). What do you think? Did I do her justice? Maybe next year I should play Grinka from the Fractured Fairies series. Aqua hair? I'd have to pass on playing Tamara the fairy -- I'd be too cold, and I don't think my guests would appreciate me flitting around naked. 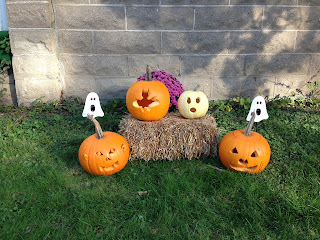 Per usual, I was rushing to get the house ready for the party, so I didn't get to spend a lot of time on my pumpkin (I always wish I had more time to do something fancy). This year, I decided to do a monster face, mainly because of my youngest's little googly-eyed monster headband we got her to play with (she was not a monster for Halloween, though, but Rainbow Dash). My eldest did the flying kitty (since that's what she also dressed up as), and I carved the ghost into my youngest's white pumpkin. Per usual, my husband did a simple face -- he's not much for pumpkin carving, but he still does it with us! 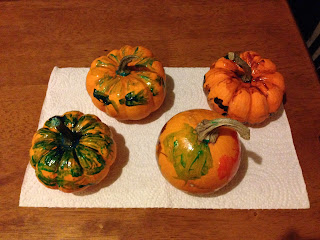 The kids also painted some of those pumpkin gourds and the teeny tiny pumpkin my youngest picked out at the pumpkin farm when she went with her preschool. 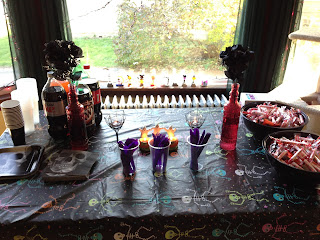 One picture of the decorations from the party! I didn't take many because of the major rushing this time. Once everyone started arriving, I pretty much collapsed into a chair, chattered, and ate. 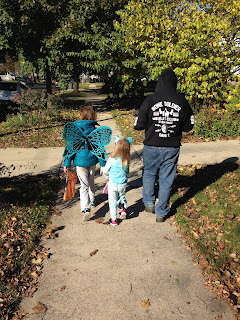 And I thought this was a cute picture, so I'm going to post it, even though I am careful not to post many pictures of my kids publicly. Trick or Treating! I love it that the last couple of years we've all went together. (Don't worry, we still put a bowl of candy out for the other Trick or Treaters.) 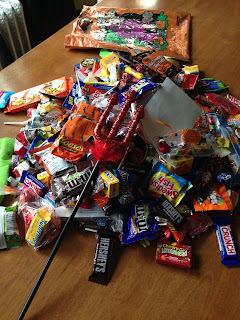 Finally, look at all this candy that my kids got this year. Notice the pitchfork resting on top of it all? Yeah, Mama Tax. >:)

I hope everyone had a great Halloween this year!

Oh, and as a reminder, you can still get the Monster Maelstrom anthology with my Fractured Fairies flash story, "Monster in the Room", in it for FREE! Amazon, B&N, Kobo, Smashwords, iBooks, and GooglePlay!

Ebook and Paperback Giveaways for Mind Behind the Mind 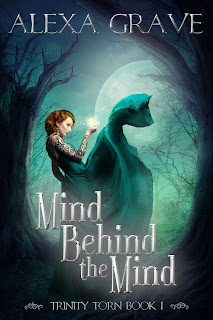 This past Friday, on October 13, it was the one year anniversary of my publication date for Mind Behind the Mind (Trinity Torn, 1).

I really can't believe it's been a year, and that I'm now elbow deep in revisions of the sequel! I was so happy to have finally released it into the world. And well, I felt the need to celebrate the anniversary, so... it's giveaway time!

I am currently running two giveaways, one for ebooks and one for paperbacks. Three copies of each format are available. Both giveaways run through October 30, 2017. Details on both are below.

First, the ebook giveaway is through Amazon. You do have to follow my Amazon Author page to enter the giveaway, but that's not too hard, is it?

Second, the paperback giveaway is through Goodreads. You don't need to do anything to enter, but I'd love it if you'd add the novel to your To Read shelf! Link is below, with some of the information as well.

Mind Behind the Mind

See the giveaway details at Goodreads.

Please spread the word about both giveaways to whoever you think might be interested. Good luck, and happy reading!

The Dark Tower - How It Influenced My Writing

***WARNING! There may be spoilers from any of the books in The Dark Tower series.***
❦

This post was originally going to be a commentary on the movie version of The Dark Tower, but after the reviews for said movie rolled in, and I realized just how different it was from the books, I decided to opt out of seeing it. Maybe I'll watch it in the future when I can nab it on Netflix or at the library, but right now I decided it was best I not ruin my fond memories of this series.

The Gunslinger by Stephen King Instead, I started re-reading The Gunslinger.

I first read books one through three when I was in high school. And I awaited the fourth in the series eagerly (it was released my Freshman year of college -- yup, this dates me, haha). As a matter of fact, I worked in a mall across from a B. Dalton (I know, those don't exist anymore), and for months before they had a display out front advertising the release of Wizard and Glass. Needless to say, I spent many a work hour longingly staring at that poster.

Since I read these novels during such formative years, they clearly had an impact on me. Not only in life, but in my writing as well.

I instantly latched onto Jake when I first read The Gunslinger, and mourned his death not long after I met him. And of course I rejoiced when he rejoined Roland in the third novel.

The biggest draw of these novels for me, though, was this glimpse into a world that could very well be the future of our own. There are so many connections to our own world that you wonder if it is more of a futuristic dystopia. Or it could simply be that doors between our world and Roland's allowed some things to leak through, attributing to the similarities. I loved that multi-layered sense, the possibilities of Roland's world being linked with ours.

And of course I've taken the love of such a feel and used it in my own writing. My Fortunes of Fate series have both our world and the world of Fate linked, not quite to the point where you find things from our world in Fate, but people have definitely traveled back and forth between the two worlds. Though I don't even know at this point how much each world will influence the other (because I don't have all the stories plotted out).

Then there's Chains of Nect. I started Obsidian's Obsession a couple years ago, posting chapters to Wattpad and my blog. Nect is a world with many portals, and it borrows things from the other worlds (though that's not completely clear yet up to where I've written to). Some of those worlds are more advanced like our own.

I even started Mind Behind the Mind with wanting this feel of a Western at the beginning in the town of Sierka. The Gunslinger very much has that feel as Roland crosses the desert, his guns on his hips.

A certain town in Dead As Dreams (a novel I hope to release later next year) could have even had its beginnings in my subconscious as a memory of Tull and what Roland did there.

As I re-read The Gunslinger I had some small ah-ha moments where I realized just how much The Dark Tower series has influenced me, and how it still follows me around to this day.

Now, I'm not going to say the whole series is perfect. I much prefer the first three novels, The Gunslinger, The Drawing of the Three, and The Wastelands. Wizard and Glass was also decent, but it's mostly backstory (probably should have been a prequel). And I absolutely detested when Stephen King wrote himself into the series. If that's taught me anything, though, it's that I shouldn't get so caught up in myself and my personal issues that I go that deep into author intrusion in my own writing. Ever. And I wholly admit I have yet to read The Wind Through the Keyhole, the most recent in the series, but it's chronologically between two of the earlier releases (I do own it, though).

Can you see now why I had a hard time bringing myself to go see The Dark Tower movie? This series has impacted my life in such a huge way, and I hate to have that tainted by a bad movie. I'll watch it when I've prepared myself enough to not care what's on the screen and disconnect my brain enough to convince it that it's not the story I loved from the start.

No matter if I see the movie or not, I'm sure The Dark Tower series will continue to influence some things in my writing, even if I don't realize it!

Do you have a series that has impacted your life greatly? Either your writing or something else in your life? I'd love to hear about it!