I figured it was about time I posted a writing progress update. I'm still not quite sure how it's almost the end of June, but here we are -- half the year gone! Eek.

At least I don't have that writer's guilt like I did this time last year.

Why not? I've made progress. Lots of awesome progress. So much progress that I have a tentative release date that I actually think is feasible for Thorns Entwine the Blade (Trinity Torn, 2).

Of course, that could all explode in my face. I'm knocking on more plywood...

If you want a reminder of my goals for the year, pop over to my 2019 - Determination post. And here's what's happened in 2019 so far (and if you want to scroll to the end, you'll see the tentative release date for Thorns):

❦ Though I didn't have it listed in my 2019 goals, I published Born of Blood and Spells: 13 Dark Fantasy Stories & Poems in March. I'm glad I had the chance to get this extra side project done!

❦ As mentioned, I upped my blog posts to once a week again for a while. Then I decided it was too much extra work right now. Got to focus on writing and publishing books, right?

❦ That one picture a day on Instagram thing? Yeah, that fell by the wayside. I got sick and enmeshed in other tasks. I'm still hoping to post more often on there, but it might not happen this summer.

❦ Newsletter has been released monthly, and while I'm a little behind on Critters critiques, it's not so bad that I can't catch up before I need to submit Well of Solitude (Fortunes of Fate, 7). And yes, that's the title I've landed on. Finally.

❦ I've drafted a couple of scenes for Well of Solitude, but it's mostly been put on the side until I finish revisions of Thorns.

❦ Finally, I'm only two chapters away from finishing the main revision of Thorns Entwine the Blade! And I'm pretty much on schedule for the year (after a few ups and downs, it all evened out). Now those last two chapters need the most work, and my final word count is going to be higher than estimated, but that's OK. Once this revision is done, I'm going to do a quick consistency edit, which shouldn't take more than a month, and then send it off to my editor!

I suppose that means you might want to hear the tentative release date for Thorns? Remember, this is still a maybe. It depends on my editor and how Fall kicks off for me. But if everything works out as planned...

Thorns Entwine the Blade will be released in October 2019! 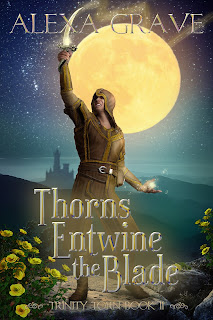 So, three years after Mind Behind the Mind was released, the sequel will finally be out in the world (the exact same day if I want to release on a weekend -- heh). I know, a long time span between. Life, I tell ya. Better late than never?

I'm pretty darn happy with my progress so far this year. It's not at the level of many other indie authors, but I'm still moving forward, and that's what counts. Here's hoping the second half of the year is as productive as the first half!

How have you all been doing on your yearly goals? Whether it be for writing, school, or any other projects?

This was originally supposed to be part of my time theme of posts, but other things came up. Since I felt it was still an important topic, I wanted to write about it. Here we go! 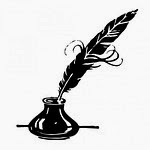 Almost every writer has asked this question at one time or another: "How do I find the time to write?" Most writers hope there's some secret that the successful writers they know and love will share with them.

And no, I'm not about to tell you where to find the time to get words down -- that honestly varies depending on the individual. But for those who do answer this question, it tends to boil down to one thing. Sacrifice.

Now, sacrifice could cover a lot of tasks. Me, I tend to sacrifice doing more things with my kids and cleaning the house on a regular basis. I feel guilty about the first, and I internally struggle between frustration and "I don't give a crap" with the latter.

Some people though, they sacrifice sleep, exercise, and relaxation. If they want to get an hour of writing in each day, they get up before the rest of the house wakes, or stay up late after everyone else is asleep. Or instead of unwinding for an hour at the end of the day by watching TV, they hop from the day job to their writing job.

That doesn't sound too bad, does it? Many of us might be able to function just fine with one less hour of sleep or not having quite as much down time as we usually do.

The problem is when that sacrificing becomes excessive. And all concerns for self-care are tossed out the window.

Unfortunately, the current atmosphere in indie publishing only drives writers to sacrifice more, since releasing books on a consistent basis is the best way to gain readers and make a living (and I'm talking at least one book per month). This rapid release definitely works, but to keep it up, you have to hit a certain word count each month. And to do that, you have to sacrifice even more sleep, more down time, and possibly even a lot of your physical activity.

I've read posts where people are working a full-time day job and trying to rapid release. They're sleeping less hours than fingers on a single hand. They give themselves no time to take a break and recharge their mind and body. To keep up with their word counts they're wringing themselves dry.

OK, I know there are people that can keep up with such schedules and thrive on little sleep and minimal relaxation time. Good for them -- they are few and far between.

In most cases, though, the writers sacrificing any time they don't see as worthwhile (including sleep) for a long period of time will start to feel the effects. They'll hit a wall. And in all likelihood, that wall will be physical and mental strain, even injury.

Along with that, it could even lead to burn out, where you just can't write anymore because you've fried your brain. I'm always scared of this one, even at my slower writing pace.

I don't want to sound like I'm lecturing. Believe me, I'm not one to climb on my high horse over healthy living. I need to exercise more (like way more) and eat better. Sometimes I stay up way too late, not because of writing, but because of games or TV. I suck at this whole balance thing, as I've discussed many times before.

But I try to be aware of the self-care I know I need to work on. This also includes realizing what kind of balance is right for me. Some people don't need a lot of down time to unwind. Heck, for some people writing is unwinding.

For me, though, I need a bit of extra time to relax. I have to schedule it in everyday, or I'm going to get myself in trouble. The days I go full tilt, getting tons of tasks done, house, writing, or otherwise, without taking time to breathe and relax with games or TV (or reading, of course) feel awesomely productive. If I keep that up for a few days in a row, though, I ram into a nasty steel wall and I'm out for the count several days in a row with a productivity concussion.

Physical and mental health for a writer is insanely important because if we push our bodies too far, they'll break down. And then how will we be able to write anymore?

I know, I know, sometimes we need to sacrifice to find any time to write. Just make sure once in a while you're taking a step back to reassess how much you're actually sacrificing. Self-care is just as important as the writing itself, so we can keep writing.

You can't write if you're dead.