Suicide Squad - Fun But Could Have Been Better

No catchy title this time. I think that part of my brain may be on vacation. Sorry about that. Anyway, here's your warning.

Warning, warning! *turns on the flashing red light* SPOILERS ahead!!! If you haven't seen Suicide Squad yet and don't want it ruined, don't read on. If you don't care, well, dive right in.

I could probably go on and on about a lot of things in this movie that could be improved, but I'll try to keep this post under novel length. Promise. ;)

First, I do want to say that I don't think Suicide Squad is a horrible movie by any means. It was fun to watch (though my poor husband missed nearly half of it because the toddler decided she wasn't going to be cooperative in the theater), but it's not one I'm crazy, excited about to see again.

I was looking forward to this movie. But I was also scared they were going to botch things up. Personally, I was mostly looking forward to Harley Quinn - forget all those other bozos. Heck, this should have been a Harley movie (and I hope we get one in the future, as long as they take some lessons on the mistakes of this movie to improve on their delivery). And Harley was fun. Best part of the movie, of course. Margot Robbie played the roll well (which is why I'd love to see her in her own Harley movie).

That said, I think there were several things that could have been improved. I have a pretty long list, too, which I think I'll have to shorten for this post!

The beginning. Oh, the beginning. It was a bit too disjointed for me and contained massive info dumps. Why couldn't they have done briefer story flashbacks as they were pulling the team together? I think the beginning suffers from the Started the Story Too Early Syndrome. The story really starts when this band of misfits is pulled together. Kind of like with Guardians of the Galaxy. Guardians wove the backstory into the movie (aside from the brief beginning when Star Lord was nabbed by aliens), instead of dumping it all at the beginning. And when they were taken to the prison and had their dossiers read, it was brief. Suicide Squad was long-winded with the backstory. Not to mention they told rather showed. It's a freaking movie - we should see more, not just have it all fed to us!

Another thing that bugged me is that none of the characters clicked well. At the end they have this big thing about how they're now a family. Diablo says, "I already lost one family. I'm not going to lose another." Aside from that being overly melodramatic and a tad cliche, I didn't feel it. These characters still felt like merely individuals forced to work together. That little "bonding" scene in the bar wasn't enough for me to make them feel like they were family or worked well together. Not like by the end of Guardians (yes, I'm a Guardians fan girl - I can't wait until the next one). I wanted to see them mesh better, but they just didn't.

Oh, and the whole Slipknot thing (you might be asking yourself, "Who?" - I don't blame you). How was it not clear that he was going to be the example for if they got out of line? They plop him in with no backstory at the beginning like all of the others. I mean, really? You knew his head was going to be blown off rather quickly.

I know some people didn't like the villain in the movie much. Honestly, I didn't think she was that bad of a villain. I liked her as a villain. What I didn't like were her zombies. And you can say all you want that they aren't zombies. They are - mindless creatures intent on killing (you don't need a thirst for brains to be a zombie). I did enjoy the fight scene at the end with Enchantress though. That was fun.

Now, I mentioned I loved Harley. Sadly, her backstory with Joker wasn't done enough justice. It could have been much better. The way they presented it all was very disjointed. The best scene though was when Harley jumped into the chemical vat and Joker followed her. I loved that scene. It had a lot of emotion in it and it showed people not only how much she loved Joker but also how much he loved her. But. You knew there was a but coming, didn't you? That scene was horribly out of place. It's triggered when she looks down a stairwell because she thinks of the drop to the chemical vat, but the placement still felt off with what was happening before and after in the movie.

I'll leave this review on a positive note, though. Or maybe a positive bullet? Heh. Oh, I'm not funny? Fine, then. I loved Harley's revolver. At the end when Deadshot uses it, you see the LOVE and then the HATE etched on the cylinder. I thought that was awesome. Sometimes you just got to smile at the small touches.

The fourth Fortunes of Fate title released this past weekend! Yay! Interested in seeing Tilly again from Dreams in Shadow? Well, you're in luck because she makes an appearance in Void of Intuition. Right now, you can find Void of Intuition on Amazon, and near the end of November, it will be available at other retailers as well.

Oh, but you'd like to see a snippet of the story, wouldn't you? An excerpt and the story blurb is below. Happy reading, and may the cards reveal a bright future. 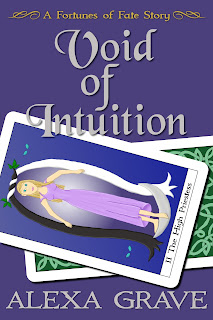 She opened the door.

A movie screen blocked the entrance. The white screen wavered, then showed crackly gray, like an old projector filmstrip. Was there a tinge of purple to the gray?

Numbers counted down, 10, 9, 8... delaying the inevitable. The dream had a wretched sense of humor. It knew she wanted this over as soon as possible but it dragged things out, taking every second it could from Cece’s life.

“Come on, already.” Her voice echoed through the house, tinny to her ears.

The filmstrip stopped on 5.

“Sorry,” Cece whispered, so as not to hear the weird echo again.

The countdown continued and finished.

The image of a little girl in overalls appeared on the screen. She skipped down a dirt road, laughing and chasing a cat. The gray cat from the stoop. At least Cece thought it was -- hard to tell in a black and white film.

She studied the foliage on the side of the road. Nothing odd about it really, but she had the sense she’d never seen plants like these before and that she couldn’t find them even if she scoured all of Earth. There was that hint of purple again. Surely her eyes weren’t playing tricks on her if she’d seen it so often.

Who knew with these dreams.

The girl seemed happy, carefree. Cece wished she could be like the child. It had been a long time since she’d experienced that kind of joy.

But as in most dreams, the first picture she saw wasn’t the true one, not if she only looked at it on the surface. And there it was, trailing behind the little girl -- a long shadow, longer and darker than a shadow had the right to be.

And as Cece watched, the shadow grew larger, stretching across the screen, eating away at the scene. It morphed into something misshapen, unrecognizable -- a puddle of ooze seeping along the edges. Until it swallowed the cat whole.

A woman whose dreams come true.

Cece’s tried to ignore her prophetic dreams all her life – they’ve caused nothing but heartache, starting with the death of her grandmother. But now she’s dreamt of a lost child. And the dizziness that only plagued her in her dreams starts seeping into the real world. When she begins hallucinating, she fears she’s losing her mind. There’s only one person she can turn to – an ex-boyfriend who told her he never wanted to see her again. Will he be willing to help her now?

As many of you know, since I started my Baker's Dozen Experiment last October, I've been publishing all of my titles on Amazon only. 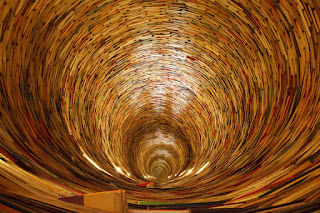 Well, the time has come to start offering some of my titles at other retailers! This is where the term "going wide" comes from. It means I won't just be publishing titles with one retailer.

The one negative of this is I can no longer be in Kindle Select, so no more availability in Kindle Unlimited. For now, I'm removing titles from Select one at a time (depending on when my Select term is up), and I do still intend to put future titles in Select for at least 3 months (more if I'm getting a lot of page reads) before I move those titles wide. Of course my plans could change at any moment.

The great thing about going wide, though, is that now if you have a retailer you prefer over Amazon, you can buy my titles from there! Don't worry. Everything is still available for purchase on Amazon too.

I know, the whole Select thing can be a little confusing if you're not a writer juggling all these publication things. If you have any questions or need clarification, don't hesitate to ask! I'd be happy to answer anything I can.

Oh, I suppose you might want some links. You can now find 4 of my stories at Barnes and Noble, Kobo Books, and iBooks, as well as several other smaller retailers (just search for my author name on your retailer of choice to see if my titles are available). The links should take you to all titles by Alexa Grave.

Does your library also use Overdrive? If so, my titles are available through there - try to recommend them in Overdrive for your libraries to purchase!

The 4 titles currently available are: Dancing in the Wind, Dreams in Shadow, Tales of Chyraine, and Bound. Later this month 3 more titles will be available: Love Fades, Fractured Fairies, and Blood & Booze.

I'll be updating my website with this information next week, hopefully!