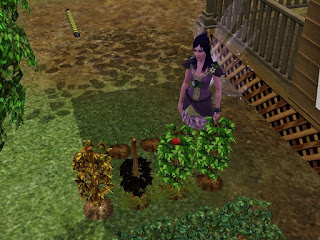 Lila is a fairy that loves gardening above all else. However, that's not the only thing she enjoys to pass the time--art comes a close second. By most standards, she's highly intelligent, so don't try to get into a debate with her. Not to mention she descends from a long line of temperamental fairies. It's best to agree with her, or you may see her true colors under all of that purple. She's also an incorrigible flirt--human, fairy, werewolf, vampire, it's no matter to her.

Lila just moved into Moonlight Falls, a neighborhood she hopes she'll feel right at home in. Her first few days of settling in, though, give her no time to make new friends, let alone find some romantic interests! The first day she deals with the hassle of purchasing the bare essentials for her two-bedroom ranch. But she also makes sure there's some time to start her garden as well as relax and watch part of a game at the local stadium. She also gets a job as a Test Subject in the science track! Got to make some money, no matter how menial.

As the second day in her new home dawns, she doesn't expect to be faced with a stove fire while making breakfast. A handsome vampire firefighter comes to her rescue, but she's already put out the flames before he arrives, so he's none too pleased. She tries to calm herself down for the day by going to work and then tending to her garden.

Day three doesn't leave Lila much time for anything other than work and gardening. But on only her fourth day in town, she receives a promotion at work--she's now a Lab Tech. She treats herself to a massage at the spa. Unfortunately, it's the night of the full moon, so while she sleeps, a zombie devours her garden!

Will Lila be able to repair the damage done to her beautiful garden? Find out in Chapter 2!

NEXT UP: Yearly Goals and Monthly Update 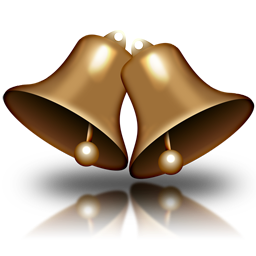 Graphic By petercui (Bide Cui) This time of year, most people are thinking about Christmas. Well, Christmas actually is derived from an older holiday--Yule, or the Winter Solstice. Yule is the shortest day and longest night of the year. Once the Winter Solstice passes, the days will start getting longer again! The date Yule lands on can be different from year to year, since it marks the aforementioned--it's usually anywhere from December 19 through December 22 (this year it lands on December 21). For many Pagans, the heralding of the sun's return is a symbol of rebirth (the God reborn of the Goddess).

Many of the symbols associated with Yule will be quite familiar, since Christmas has borrowed many of them. A decorated tree is one (we just call it a Yule tree in our house, instead of a Christmas tree!). Wreaths--symbolizing the Wheel of the Year--burning candles and Yule fires--calling back the sun--bells, and feasting all represent the Winter Solstice. So, when Yule comes around, try to remember that it means sunnier days are ahead!

Clearly there is more to Yule than I've summed up here. You may want to visit the following websites: The Winter Solstice--Yule Lore, History of Yule and All About Yule.

NEXT UP: The Sims 3 - Lavender Legacy, Chapter 1 - Meet Lila Lavender!

Screenshot from Everquest
A Gamer's Lexicon series touches upon terms players use in video games. The terms here mostly come from my experiences in the MMORPG (Massively Multiplayer Online Role-Playing Game) Everquest. This series will hopefully help the non-gamers understand some of the terms gamers use. And gamers may find it humorous as well! If you have any gaming terms (from any type of video game or table top gaming) you would like me to address in the future, or if you think I should add something to already defined terms, please post in the comments--I may ask you to define a term though, if it isn't one I've come across before. Happy hunting!

The previous terms in A Gamer's Lexicon series can be found here:

Welcome to the special Everquest Edition of A Gamer's Lexicon! Everquest recently released its 19th expansion (crazy, isn't it?), so I thought it was a good time to focus solely on some Everquest-only terms.

Evercrack - This one might be self-explanatory. ;) Many people refer to Everquest as Evercrack, as it can be quite the addiction!

Lesson of the Devoted - Also simply called Lesson or LotD, this is a veteran reward that allows players 30 minutes of double experience gain every 20 hours. Veteran rewards are for long standing players, a different award given for every year (cumulatively) you have played/paid for Everquest. Lesson is the 1-year reward. When people activate the ability, they may say something like: "Popping Lesson" or "Burning Lesson".

DOOM - Yes, all caps. Could mean anything, right? Well, for Everquest players it's related to Lesson. When people pop lessons while killing mobs, they may call it DOOM because some consider it unlucky! For some reason, there tends to be a higher chance of death when you are burning your Lesson (this is likely simple coincidence). The RNG Gods seem to think that wipes are more amusing when Lessons are popped. =P

Rat Killer - This was a nickname for Everquest when it was first released! I didn't start playing until several expansions later, but I heard when EQ first came out, it was mostly people chasing after rats!

And the coup de grâce of this post--the list of expansion abbreviations! Hang tight, 19 expansions makes this list a long one!

SoV or Velious - The Scars of Velious

PoP or POP - The Planes of Power

GoD or GOD or Gates - Gates of Discord

OoW or Omens - Omens of War

And word is that they will be releasing content differently in the future. Is it the end of the expansion acronyms? We'll see! But I think Everquest still has quite a few years left in it.

Speaking of EQ, time to log in and nuke some mobs!

NEXT UP: The Sims 3 - Lavender Legacy, Chapter 1 - Meet Lila Lavender! - I lied! It will actually be Magic is Reality, Reality is Magic: Yule

Do You Speak Simlish?

NaNoWriMo was a bust, per usual, but I think in 2013 I'm going to pick a better month and see if I can hit 50k words then. Getting into the winter and the holidays my writing productivity drops for various reasons (family, life, the urge to hibernate, etc.), so a spring month would be so much better than November! Still, I have a complete rough draft of one Fate short done, and the start of another--can't say I didn't get anything done.

I've also been attempting to organize my house. For me, I feel if things are tidy around me, my brain will work better and be less panicked. I have yet to prove this theory because the house is always a mess. However, I'm making better progress than usual. This month my study WILL get completely cleaned, including the endless papers.

This month I also hope to get back to sending some short stories out, as well as maybe prepping another story to be indie published (or maybe two in one!). It won't be released until 2013, though, most likely. I also plan to get back to revisions of Dead As Dreams.

So, are you still wondering what the title of this blog post means? OK, I give.

I recently purchased The Sims 3 along with the Supernatural expansion. Many people on The Sims 3 website like to do Family Challenges or post stories of their Sim families. And I thought it would be fun trying that out as a series here on my blog--starting with chapters in the life of the Lavender family, the progenitor being a fairy named Lila.

Now, I know some people may be skeptical over this. I will be telling more than showing (a big no-no usually when writing fiction), but I think it will be a fun exercise! And it will definitely have the fantasy slant to it (which makes it far more interesting, in my opinion). I likely won't post a chapter more than once per month, depending on how much time I have to play the game--right now I'm trying to play for a couple hours each week.

That means you all have the first chapter on the Lavender Lineage to look forward to this month! As well as a post about Yule. Oh, and a special edition of the Gamer's Lexicon too.

Don't forget to join us over at Writing Quest - December! Happy writing and reading. =)

NEXT UP: An entry in the Gamer's Lexicon! What game was nicknamed Rat Killer when it was first released?