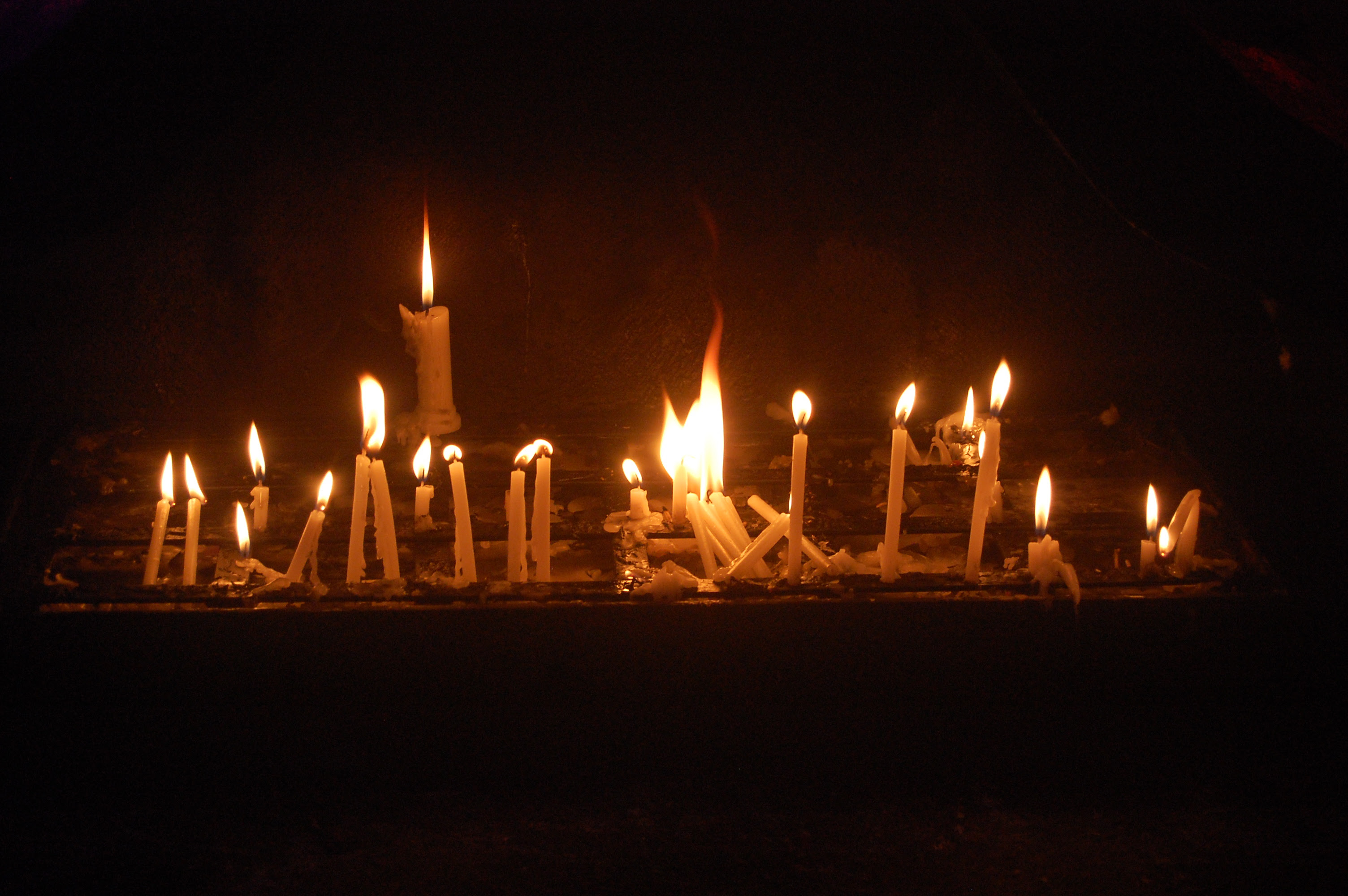 Picture By Arunravi.signs Candles are used as symbols for many things, and their use is incorporated into several religions. Judaism has the Menorah, and Christianity utilizes candles in many of its rituals. Paganism also uses candles, in ritual, as well as for practicing candle magic.

A candle flame illuminates objects around us in the dark that we otherwise can't see. That flame can also reveal the magic around us, the flame feeding a spell. It's not as simple as lighting a candle and the spell is done, though. Depending on your intention and goal of the spell, you can use a specific type of candle.

Color is important in candle magic. Each color symbolizes different things. I've already touched on the meanings of green and orange in this series. If you're casting a spell to improve your financial situation, you'd choose a green candle, for example.

Some people also use different shapes for their candles, depending on the spell. You can etch symbols into the wax as well as rub oils on the candle. Color, shape, symbols, and oils can each represent something different in the spell you are casting.

However, in magic, intent is usually the strongest factor. The colors and other items help us focus and direct that intent.

So, the next time you blow out your candles on your birthday cake, think of magic when you make your wish.

If you'd like to learn more about candle magic, please check out the following websites: Candle Magic, The Meaning of Candles, and Candle Magic 101: An Introduction to Candle Magic.

NEXT UP: Dude In Distress - Part 1

Below is a snippet of something I am currently working on. Be warned, it will usually be rough draft material. Please let me know if you like what you read! It'll encourage me to keep going. ♥

Aysa tried to squeeze her eyes shut, but they remained open. No blocking out the scene before her. True, the woman only danced, but there would be more. It was a nightmare, and it would surely live up to the word.

The chains shifted and squirmed, cold metal snakes winding themselves about her, brushing against her skin. She struggled to free herself--they only tightened their grip, creating a noose around her neck. They pressed on her windpipe, and she coughed, the small amount of air she was able to pull into her lungs burning with every attempted breath. She scrabbled some more, in an effort to reach the chains at her throat, to pull them off, but it only made things worse. No. Her vision blurred. This was what it felt like to be captured, to be thrown into slavery, to have freedom ripped from her hands.

Allowing the chains to choke her wouldn't help her escape. Panicking only hindered progress and hope.

So, she relaxed in her bindings. She refused to give up, but she'd bide her time.

And she watched the woman dance.

From Dead As Dreams, Chapter 24 (novel currently in the revision process)

NEXT UP: Magic Is Reality, Reality Is Magic - The Candle

Screenshot from Everquest
A Gamer's Lexicon series touches upon terms players use in video games. The terms here mostly come from my experiences in the MMORPG (Massively Multiplayer Online Role-Playing Game) Everquest. This series will hopefully help the non-gamers understand some of the terms gamers use. And gamers may find it humorous as well! If you have any gaming terms (from any type of video game or table top gaming) you would like me to address in the future, or if you think I should add something to already defined terms, please post in the comments--I may ask you to define a term though, if it isn't one I've come across before. Happy hunting!

The previous terms in A Gamer's Lexicon series can be found here:

It's been a while since I've had a new post for A Gamer's Lexicon! To put it in perspective, Everquest has released two more expansions (up to 21 now). I think it's high time I added more terms.

camp - NOUN: A specific area a group sets up to kill surrounding mobs. When people call for a Camp Check (sometimes simply abbreviated CC) in a certain area, they are asking where groups already there are killing mobs, so they know not to encroach on their territory. VERB: To target a specific mob or mobs to kill. "I'm camping this mob until I can get the loot I need from it."

spawn or pop - After a mob is killed, you have to wait for the next spawn or pop, in other words for it to show up again. There is usually a timer, different for each area, that determines how long it takes for mobs to re-spawn or re-pop. The average time in Everquest for more recent expansions is 15-20 minutes. That can be a long time to wait if you're only killing one mob and waiting for it to re-spawn!

Named - A special and rare kind of mob that takes time to spawn. Named mobs usually drop better loot, including armor. Most Named have capital letters at the beginning of each word in its name, hence the term Named. However, there are some Named with all lowercase letters because the developers like to be sneaky.

PH - PH is an abbreviation for placeholder. This refers to the specific kind of mob that has a chance to re-spawn as a Named. It's a normal mob, but not all normal mobs that are killed can re-spawn as a named. Usually PHes are in specific locations or have a particular name, to allow players to figure out what mobs to target if they want to spawn a Named.

grinding - One of the main goals of a game is to level. If you sit in one spot for hours on end, only killing mobs to gain experience in hopes to level, this is called grinding. "I hate grinding - I'd rather be questing!" True statement. ;)

Can you figure out this paragraph that uses all the terms above?: Last weekend I camped a Named mob. But it kept spawning as the PH! There are 20 minutes between pops, and I had to have killed at least a dozen PHs. How monotonous and mind-numbing! But that's the life of a gamer. I guess I could have been grinding instead.

Did you get all that? It's like learning a new language. Well, I hope you at least found the post fun. Now I'm looking forward to some Named hunting this weekend, and I hope we don't get PH after PH! 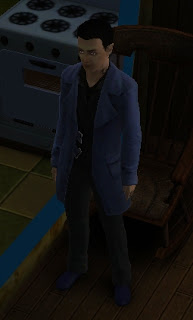 Drake Black decides to move to Moonlight Falls because it's as good a place as any to hunker down and start working on that Great American Novel. Plus it's cheap. Not like he's raking in the cash with writing.

Drake prefers to write at night, as he's a vampire. Not your average vampire, though. For starters, he's a vegetarian. Ever try to suck the juice out of a turnip? He has! Though Key Lime pie is his favorite indulgence.

Mind you, he knows he's a little odd, but he makes up for it by being a hopeless romantic. The women he dates can't get enough of his kisses. Their only complaint is being unable to rouse him from sleep to kick him out of their beds in the morning.

Even though he's a hit with the ladies, he prefers to spend much of his time on the computer. Not only does he need to put a lot of time in working on his Great American Novel, he also finds himself procrastinating by playing games and hacking into places no Sim should be--he needs to supplement his income somehow!

Shortly after Drake settles into his new home, unhappy he had to sell his computer to afford the move (guess it's back to handwriting that Great American Novel), he hears a knock on the door.

He opens it to find a beautiful purple fairy fluttering on his doorstep. She introduces herself as Lila and welcomes him to the neighborhood. He gladly invites her in.

This is just the distraction he needs.

NEXT UP: Gamer's Lexicon #4