Who wants to grab some awesome fantasy and science fiction ebooks while they're available FREE for a limited time?

Better yet, if you've been interested in seeing what my Fractured Fairies series is like, you can get the first title, Fractured Fairies: Immortal Woes & Ode to Buses and Libraries, as well!

All you need to do is pop on over to the Science Fiction & Fantasy FREE BOOKS Promotion page, then you'll see covers for all the books available. Click on any titles that interest you and the links will take you to Instafreebie, where you can download each title for free! Keep in mind, some authors may require you to sign up for their newsletters. But if you like their work, that's a great way of finding out more about what they've written!

And if you're having trouble finding the Fractured Fairies title, here's a direct link to the Instafreebie Giveaway for it.

Grab these book while you can! 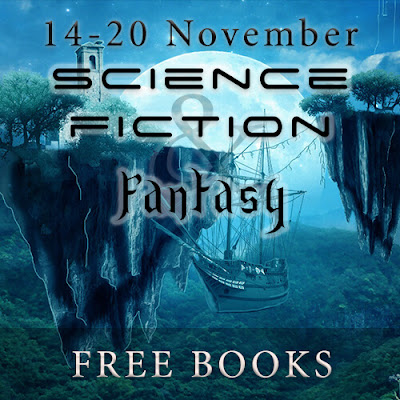 Nope, not Santa, but Syndago (very dedicated at playing Santa, though).

Yup, it's time for another Fractured Fairies tale! A Very Grinka Christmas is a new novelette that brings together several of the characters we've already seen in past Fractured Fairies stories and brings in a few new ones as well! But even if you haven't read any of the previous stories, you should easily slip into the humor in this holiday tale.

If you want a humorous Christmasy romp to read this holiday season (the fairies trying to burn the apartment down, Grinka forced to use a Christmas elf illusion, and more), then consider picking up a copy of A Very Grinka Christmas. You can find it at all major online retailers: Amazon, Barnes & Noble, Kobo Books, and iBooks.

And of course there's an excerpt below, along with the blurb.

Have a happy, fractured holiday everyone! 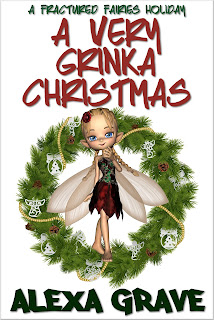 A boy of at least eight runs up to Syndago and jumps in his lap.

"Oof!" Syndago may be big, but he's sensitive. "Be nice to Santa, little man."

Little Man proceeds to yank on Syndago's beard. "You're not the real Santa, and I'll prove it!"

"Carter, cut that out and tell Santa what you want for Christmas." The boy's stalky father sidles up to me, offering a nicotine-stained smile. "Sorry about that. He gets a little overzealous sometimes. Takes after his mom." One corner of his mouth twitches. "There's a reason I divorced her." He winks.

Oh, for the love of immortals. Sadly, he isn't the first one who's hit on me. I mean, I may be in an elf outfit illusion, but it's still my usual hot looking body -- a necessity for my profession. Stripper.

A psychiatrist might say I'm overcompensating with my illusion due to insecurities. I hate psychiatrists more than I hate elves.

But if this obnoxious man knew the truth of what my illusion truly hid, he'd bolt. I'm tempted to let him cop a feel and find out what seashell-covered breasts feel like. The shock on his face would be priceless.

He shoves a business card into my palm. "Call me." His hand lingers on mine far too long.

One of the bulbs in the string of lights above me bursts.

Syndago levels a stern gaze at me as Carter bounces off his lap and pulls his father away. "Grinka, be good."

"Hey, it's only one bulb." I could have blown out the whole set. Or worse.

"Almost. Two or three more kids and our shift is over."

Then I can see what the fairy twits destroyed today. They've been on a revelry bender since the beginning of the month, and it hasn't been pretty.

The holidays will be over soon. Yes, yes. And then they'll go back to their normal level of destructiveness.

I just hope I survive.

A grouchy sea nymph who fancies herself a modern-day Scrooge. Bah humbug.

Grinka's main goal for Christmas: survive without having to celebrate a damned thing. Between playing an elf to her mopey human-sized giant friend's Santa and contending with the fairy siblings' holiday revelries, she's got her work cut out for her. And when some uninvited guests appear on her doorstep, she's forced to face a party of all the people she ran from when she left the Immortal World.

No thanks to that torture! Grinka plots to avoid the party, until she meets a handsome tree nymph who agrees to attend. Maybe, just maybe, this year Grinka will have a Merry Christmas.

Back in 2004 I joined in on NaNoWriMo for the first time. Since then I've participated in almost every NaNo (I missed one in 2007 when I was pregnant with my first), and I've joined in on some of the Camp NaNos.

Some might think this is sad, but I don't think it is. NaNo, for me, is using the crazy energy from all the writers undertaking this endeavor and spring-boarding myself into completing more writing than I normally would have gotten done. I mean, I'm a NaNo Rebel for the most part anyhow. I haven't actually started many "new" novels during all of my attempts. It's about progress, no matter how little, for me on anything I need to work on at the time. 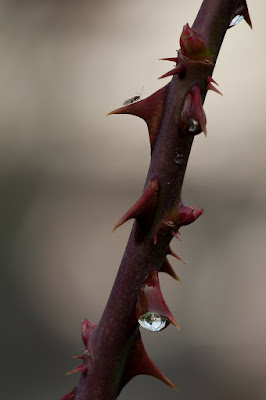 Speaking of being a NaNo Rebel, this year I have come full circle. That first NaNo back in 2004, I started the sequel to Mind Behind the Mind. It didn't have its own title back then (I didn't even have the series title picked out), but I wrote 14k words. And it gave me new insight into Mind, to better direct my revisions at the time.

Most of the words were pretty much crap, though.

So, I had to start rewriting the sequel, which is now titled Thorns Entwine the Blade, this year. I hadn't made much progress before NaNo began. But I intend to make plenty of progress during NaNo!

I am using some of the old words, but things are getting added, rearranged, and cut. I was clearly writing sparsely, as I've added a lot more words already, especially with internal dialogue. While I wasn't a Rebel that first year I started this, I am definitely one this year! Part of the month will be rewriting (not revising - trust me, the writing isn't just getting a little face lift). Then hopefully I'll get into continuing the draft.

This year I'm back around to the first novel I started during NaNoWriMo. Who knows, maybe this will be the year I actually hit 50k!

OK, maybe not that last part - lol. I'm about to have a threenager on my hands. Toddler's birthday is a few days away! My main goal is 25k again this year. Last year I hit the 20k mark - my best year ever, so let's see if I can hit that 25k at least. If I get more, it'll be gravy. I do know I need to avoid the NaNo Plague, which seems to descend on me every NaNo attempt.

And I'm posting this after my first writing session today, so I already have 1668 words on the meter! I'll attempt to keep the cute little emotions updated throughout the month as well, so feel free to check back in on this post. I'll also be updating the meter to the left on the main page of my blog.

Revise Do Not Go Gentle 6.3k