Still Trying to Beat the Heat

Today's title should say it all. It's still HOT here. July was not a fun month for the heat, which means I didn't get as much writing done as I wanted to. That doesn't mean I didn't may any progress though. ;)

I managed to revise or edit four of my short stories. One has wracked up two rejections already, one just received a rejection today, and another is at my invaluable critique partner.

The fourth story, "A Little Bit of Magic", which originally appeared in my undergrad literary magazine, Century, was heavily revised and sent off to a very important anthology. One of my writer friend's, Donna, was diagnosed with cancer in July. Some of her friends banded together and sent a call out for submissions. And I gladly accepted that call and sent over "A Little Bit of Magic". 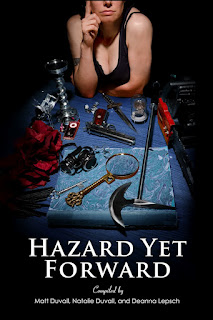 The anthology is titled Hazard Yet Forward, the motto of Seton Hill University. All proceeds earned from the anthology sales will go directly to Donna to help her with the costs of her medical treatment.

So, if you're interested in reading over 70 stories, including "A Little Bit of Magic", in a range of genres by some awesome writers that have come together to help a friend out, please consider buying this anthology. You can find more information about the contributors and Donna on the Hazard Yet Forward website. It will be available for purchase on Tuesday, August 7, and it's worth every penny!

That's my big news from July, and August will be another hot month by the looks of it. I'll be away for a full week, and I'm not allowed to work on writing or my husband might dig out a pitchfork and go "Rabble, rabble, rabble!" We're finally taking a honeymoon, after over ten years of marriage. I am going to sneak in some research on the sly, though, since we're going to visit a couple plantations!

As always, don't forget about Writing Quest! There's a lot of activity posted for August already. It's sure to be a lively month!

NEXT UP: What I'm Likely Doing in New Orleans