This story was originally written as an RPG campaign for the game Valley of Unicorns. I thought it was such a fun story, so I revised it by creating my own player characters, and I did mock rolls as well to see just how much muck the characters could mire themselves in (I kept it in present tense like the RPG scenes, though!). Happy adventuring!

You can find the first part of this story on Wattpad. ALL future parts of this story will be on Wattpad ONLY--so add it to your library there if you want to continue reading. 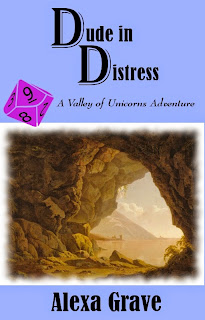 The sun sets behind the mountains as the determined band of unicorns reach the mouth of the cave.

Sun paws the dirt at the entrance. "We got a late start, it seems. Should we wait until morning to head in?" She won't admit to this bunch of horses just how much her namesake comforts and enlivens her.

"No use fretting about the dark," Star says. "It'll be just as dark inside. Besides, we have no idea how long Dom has before Big Bad Girl loses her temper and hurts him."

"We go. Now." Fiona trots into the cave.

The others follow and then promptly run into a stalled Fiona.

"A little warning," Burn says as he pushes himself up from the cave floor.

Star squints into the pitch black, knowing that this tunnel will only lead deeper into the mountain. "Can you light our way, Burn?"

Purple sparks jump from his horn again, followed by a glow that doesn't illuminate much aside from his face. "This is the best I can do, but I can't hold it forever."

"We need something better," Quell says. "I can sing in the dark, but not if I've knocked myself out from running into a wall."

Bardic jokes aside, Star knows this darkness will hinder all of them. If they come across any dangers, how will they fight if they can't see what attacks them? "Everyone back out. We have to find something to light our way before we head further in."

The horses oblige, though Fiona sulks a bit once they get back outside.

The moon has risen and the stars glint in the night sky. If only they can snatch the stars out of the sky to light their way. But not even an alicorn or pegasus can do that.

There has to be something else suitable. If Big Bad Girl can delve into the depths, dragging Dom along with her, there has to be a source near to light her way.

"Start looking, everyone!" Star wonders why she has taken on the leader roll when she didn't want to go on this adventure in the first place. Sun would tell her she has control issues.

Star grows frustrated quickly, unable to find anything of use. Perhaps Sun is right, she does have control issues.

"Look!" Sun, Quell, and Burn all say at the same time. Burn snorts, upset he isn't the only one with the discovery.

There's a slight glow a small ways up the mountain on a grassy plateau.

At least some horses have better eyes than Star.

The horses climb up to the plateau. Before them is a small field of flowers, swaying in the breeze. At the center of each flower is a glowing ball.

Fiona trots up to the flowers. "Oh, so shiny!" She leans down to smell one. "Dom would love these." The ball of light disengages from the flower she is smelling and fastens to the tip of her horn. It glows even brighter than before.

The grass rustles as the others approach the flowers, but there's no wind.

The grass jumps up from the ground in little balls with tiny black eyes and gnashing green teeth. Half of them pounce on Fiona, and she screams. The rest turn to attack the other four horses.

The Grass Gobblers aren't happy that Fiona and friends have disturbed their field of stars. Not even in the cave yet, and the horses are already running into trouble.

Time for Star to take charge again, since all the others are just scrambling to get away from the fluffy green menaces. "Get those things off of Fiona first."

They rally to her call, and everyone makes an initial swipe to clear the Grass Gobblers in their path so they can reach Fiona. Quell easily squishes one under his hoof right away, but Sun just makes them more angry, and five converge on her.

At least they know now that these little green monsters are a bunch of pushovers. Squishy little dudes.

Fiona gallops around the plateau, ten Grass Gobblers nibbling at her hind hooves.

While Sun deals with the five swarming her, Star, Quell, and Burn go after the ones pursuing Fiona.

In Star's haste to help Fiona, she gets the attention of three other Grass Gobblers, who bombard her and leave scratches down her neck. The wounds sting and slow her down, but only for a moment. Her anger boils over and she lashes out with a spell, white bursts of light shooting from her horn--two of the Grass Gobblers perish in a green smear.

The others don't have much luck, the little monsters dodging Quell's and Burn's attacks. And poor Sun flails in a panic as the five green globs nip at her legs.

"Get it together," Star says. "They're made of grass."

"But they're grass with teeth!" Sun swats at the speedy green monsters, unable to squish any, but attracting the attention of two more. One breaks off from following Fiona and jumps Quell, who quickly dispatches it with a well-aimed swipe. "It doesn't help that they're fast, and there's a lot of them."

Burn tries to call forth a damage shield to help protect Fiona, but since she's running too fast, his attempt fails. "Hold still!"

"Don't listen to him--keep running." Star glares at Burn. Does he want the nine left following Fiona to gash her up? Drawn to the incredulity she misses an easy target as it skitters right under her hoof.

Quell starts to sing, but three more peel off from chasing Fiona and pounce on him. Clearly they have something against music. He can't deflect them all at once, and his song breaks before it can be much use to the group.

Burn's temper gets the best of him, since none of his spells seem to help with the speedy Fiona and Grass Gobblers moving too fast for him, so he can't even get the words to any incantations right.

And poor Sun starts whimpering from the gashes inflicted by the seven monsters still after her.

Two more give up chasing Fiona and strike at Star, leaving more scratches on her coat. "Enough." She strikes with her magic and squishes both attackers.

"Ow! Stop!" Sun flails more as the Grass Gobblers tear at her, and she randomly squashes one.

Burn takes a deep breath, focusing on his words, and unleashes Zigzag Zap, a powerful lightning spell, zapping three of the monsters chasing Fiona. "Ha. Take that you little bastards."

Finally, a turn in the tide. Six left attacking Sun, three on Quell, and only one more after Fiona.

Sun howls, deflecting all the attacks, but is unable to kill another of the Grass Gobblers.

With only one after Fiona now, Star unleashes her magic to protect her sister, the one who wanted to go on this adventure in the first place and can't even handle grass! Through the incredulity, Star still wants to save her sister, and with excellent aim smites three.

Quell grinds one under his hoof.

Unfortunately, Burn stammers, slightly exhausted from the last big spell. The final one following Fiona leaps and latches onto Burn's tail. "No you don't." He flicks his tail, sending the Grass Gobbler flying out of sight, likely no more than a smear on the side of the mountain now.

Affronted that her sister had to come to her defense, Sun rallies and strikes one down. "I don't need your help, Star."

"Sure you don't." Way too much pride. Star shoots down the last two attacking Sun with her magic.

Quell slices through the two nipping at him.

Fiona sobs on Quell's shoulder while Star does the rounds, taking a look at everyone's injuries. All of the wounds are only superficial scratches. Guess that's what happens when the monsters have bendable blades of grass for teeth. The scratches hurt far more when they were being inflicted compared to what is left behind.

"I don't need to be looked at," Sun says. She hadn't handled herself well with this attack, besmirching her image.

Star is sure Sun will face things better next time, but she ignores the request and takes care of her sister anyhow.

After all the wounds are tended to, Star directs everyone to grab an orb from the flowers.

With shining stars fastened to every horn, they return to the cave, back on course to save Dom from Big Bad Girl.