Yes, another release! Dreams in Shadow came out this past Friday. It's the first in a planned 78 short story series called Fortunes of Fate. All the stories will be somehow interconnected, but it won't necessarily be in serial form. There will be lots of different point-of-view characters. Dreams in Shadow can be found for purchase on Amazon and can also be read for free via Kindle Unlimited and Kindle Owners' Lending Library.

Interested in a taste of the beginning? Here you go! 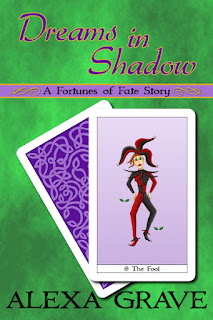 Tilly swung her mud-caked bare feet over the edge of the cliff. She enjoyed sitting on the precipice after a long day of playing, watching the purple leaves in the valley below flutter in the wind. It gave her ideas.

And the one that popped into her head that day was a grand one.

The leaves nearby rustled, and a gray cat emerged from the underbrush. It rubbed up against her, smearing its damp nose on her arm.

Ew? the cat voiced in Tilly's mind. You're covered from head to toe in dirt, and you can't stand my wet nose against your skin. Aren't you particular?

"Sorry." Tilly scratched the cat under the chin.

My speaking doesn't alarm you?

Tilly giggled. "A servant once told me a chicken begged for its life before she chopped its head off. This is Fate, after all."

For every card, there's a story.

The three cat sisters, Joslyn, Mia, and Amber, are world-hoppers. They're in search of a world to call home, and they finally find it in Fate.

However, they've grown fond of Earth as well, and they stick their noses into the lives of people from both worlds. From Fools to Magicians, the three cats are witnesses to the stories that unravel.

Twelve-year-old Tilly is the epitome of a little Fool. The moment she meets Mia, a cat who speaks into her mind, she decides on a whim that it's time for an adventure. Unfortunately, her carefree romp in the world of Fate is cut short by the willful Tillnea, a spoiled brat who won't take no for an answer.

As Tilly's adventure unravels, Mia seeks a way to get them both back on the proper path.