OK, so this post is likely just going to be mostly screenshots, and a little bit of my own art. PICTURES. That's about where my brain is today anyway. Processing words = hard (I haven't been sleeping well lately so, yeah...).

As many of you already know, I'm a gamer. Yes, I still play Everquest and Summoners War, but now I have a new addiction. Actually, it's kind of a family addiction since Hubbie and Eldest play as well!

Last October, the three of us started playing Genshin Impact, by MiHoYo. The biggest thing that drew us in at first was that it was available for free on Playstation 4 (it's also available on PC and Mobile, and it's in the works for Nintendo Switch).

As a warning, though it's available on a console, it's still a gacha game. But oh man, have they brought that genre of games to a whole new level! It plays like a normal console/PC fantasy RPG. There's a huge and beautiful world to explore. Chests (some hidden insanely well), puzzles, adaptability in game play, fleshed out characters (the ones we've received stories for at least), and a great overarching story. When I grind in this game, I feel like I'm playing Everquest (fantasy MMORPG) instead of Summoners War (fantasy gacha). Take a look at some world screenshots below. 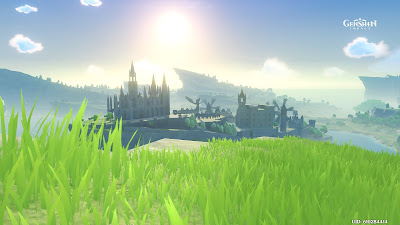 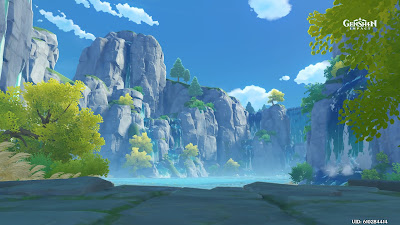 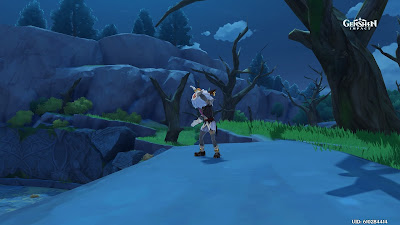 We have paid in a little bit of money to it, but we're looking at what we've spent as pretty much a monthly subscription for the game (which we pay in Everquest still). The best deals to make the game a little easier but not spend too much is going for the monthly Welkin Moon ($5 USD) and the lower tier of the Battle Pass ($10 USD every six weeks). The Battle Pass especially has helped us with being able to partially build a few more characters to experiment with.

Of course, the characters are the biggest gacha draw, especially if you want some of the 5-stars. Though, if you're patient, you will gather enough Wishes to get a 5-star without spending a penny. The rates are pretty low, but they have a pity system built in, so you're guaranteed a 5-star after so many Wishes.

Here's one of my favorites that I pulled last month. ♥ Yes, I have fallen into the world of waifus and husbandos - lol. 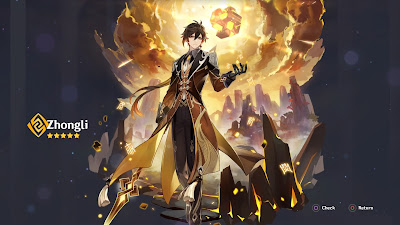 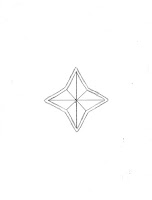 So, me, Hubbie, and Eldest have decided to do some challenges with each other in Genshin Impact as well. It's a PvE game (so no PvP content at this time), but you can group with up to three other people to tackle some things together if you'd like. Our first challenge, though, had us killing as many monsters as we could in our own worlds. We had six categories of monsters to slaughter in an hour. I decided to make some "trophies" for these categories. So I drew some Genshin Impact cards! They're still in pencil only, but the front of the cards are below, and what's on the back of the cards is to the right. 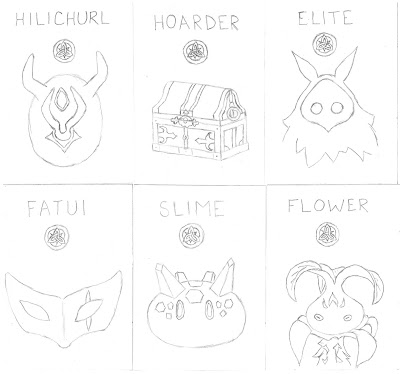 Finally, we eventually plan to do a challenge in one person's world, only using one character each, and each type of mob will be worth different points. I made a big primogem for the trophy for who gets the most points (kind of similar to a wrestling title, it will be handed to whoever the current champion is, as we plan to do this challenge more than once). This one I colored already, but scanning it in dulled some of the colors. It's posted below. 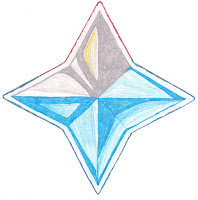 And you do know you'll all be seeing more screenshots from me in the future, right? Happy gaming!