Finally, a new release! It feels great to be on schedule (actually, I'm a bit ahead for the year). Well of Solitude (Fortunes of Fate, 7) is now available as an ebook at all major online retailers!

Please remember, as with most of my Fortunes of Fate series, you can jump into whichever story you'd like to first - no need to have read the previous titles. Well of Solitude ended up in the novella range, so at around 70 pages you may want to consider diving into this one since it's over twice as long as my second longest Fate title (that would be Edge of Sorrow).

If you'd like to grab a copy after reading the excerpt below, here are a few links for you: Amazon, Barnes & Noble, Kobo, Apple Books, Google Play, Smashwords, and Books2Read (this last one will give you the option of your preferred online retailer).

As always, if you read Well, please consider leaving a review at one of the retailers or on Goodreads. Thank you, and happy reading!

Note: In the excerpt below you'll see Solis referring to Resz as Rez - this is intentional, not a misspelling! 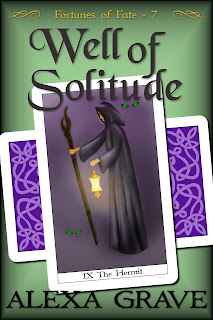 She brushed her fingers along the door. It creaked open, stale air gusting out.

Only the touch of the dead opened this door.

An ache throbbed inside her – the desire to be whole, normal, not suspended between two worlds. She felt it every time she entered the Well.

Solis glanced up the stairs one last time. Rez peered down, but didn’t move to follow.

Right. Into the depths. After she slipped in, the door sealed behind her with a thud.

A tomb, indeed. One with endless labyrinthine passages and an underlying musty odor of death. Home of the souls of Fate, tasked to wander their unlives away in the darkness. Knowledge that saddened her.

She hoped those who believed some spirits chose to be reborn were correct, though she only bore witness to the ones rambling this maze. If there was another way out aside from the door behind her, or a portal to a different world like the cat had claimed, she’d never found it. Hard to search every passage when they were truly endless and she feared getting lost.

Though Solis had ventured further in on many occasions, attempting to memorize and map out routes in her mind, today she refused to. The necromancer had her on edge. She’d lied to him – she was mostly safe, but not completely. Down here, the madness of the spirits knew no bounds. She was less of a target because of her state, and many had accepted her presence as ordinary. Yet there was still an inherent risk, the chance an insane enough shade would attack her, even attack another of its kind.

The Well was a place for spirits to rest... and lose their incorporeal minds.

Except Neggie. He’d remained sane for the seemingly endless years Solis had known him, and he’d implied he’d been a resident of the Well for much longer before that. Tracking time proved difficult in the garden, though, so no telling how long she’d been here – it all felt eternal. And her unique makeup ceased her aging, a type of immortality, so she couldn’t track the years that way.

Solis sighed, not wanting to dwell on her enduring predicament. At least she was able to offer a touch of light to the darkness, for her and the spirits.

She tossed the lily into the air, and it exploded, sundering itself. Five of the glowing petals zipped into the maze, quickly disappearing into the depths to wander through the winding passages. The remaining orb of light bobbed above her, then landed on her shoulder.

It amazed her how deliberate and sentient the petals acted once they disconnected. As if they transformed from flowers to fairies.

Solis lightly patted the petal. It flitted off her shoulder and hovered high above.

“I sense the living in the garden.” Neggie’s voice broke the deathly silence, and he swirled into existence, a hulking brute of a spirit. She’d always been tempted to ask who he’d been in life, but he likely didn’t remember. Memories melted away the longer one was dead. Currently, his form shaped itself into one resembling a human, his typical appearance when he addressed her, though he’d mastered the ability to shift into whatever he wished, like a cloud of smoke with a will.

“Ah, Neggie, I was just about to call for you.” Her voice dropped to a whisper. “It’s a necromancer.”

He bent over, his translucent face inches from hers. “Truly?”

“The spirits drew him, and he broke through the enchantments around the island. A determined and stubborn man.” Rude, too, but she figured he wouldn’t care about that.

Neggie billowed upright, his form growing taller. He towered over her – even without a solid form, he was intimidating. “What does he want?”

“To enter the Well.” Odd, he never asked silly questions. Everyone seemed to be doing so today.

“And?” The shadows of eyebrows rose, shimmery in the petal fairy’s glow.

Solis hesitated. Normally, Neggie was more forthcoming, chattier than the other spirits, sometimes more than she cared for. “I thought it best to speak to you.” Her voice cracked, throat suddenly dry.

“Without discovering his intentions? Foolish girl.” His usual patience and kindness had evaporated.

Never. He’d never called her such things before. Girl. She’d left that designation behind years upon years ago.

The kind, yet imposing soul, had transformed into the commanding leader of the spirits he claimed to be. And Solis didn’t like it, not one bit. “He’s a necromancer. You know, someone who can control the dead.” She waved her arms around. “Including me.”

Neggie hummed. “I know what a necromancer is.” He drew closer again, though she wished he hadn’t. She didn’t think it possible for a spirit’s gaze to appear so menacing, so unhinged. “Keep him from entering the Well at any cost. Including your own life.”

Solis stepped back and gasped. “Or?”

“I’ll banish you from the garden forever.” His bulky form swirled into a cyclone and zipped down the nearest passageway, the darkness swallowing him. Booming laughter trailed behind him, and several other spirits cackled in response.

And Solis was left alone to turn Rez away from the island. A necromancer who could manipulate her own soul.

That or risk losing the comfort of her garden – the only place she belonged.

All of a sudden the glowing petal dashed away, and the spirits hushed, returning the maze to stark silence. The Well suddenly felt darker and more threatening than it ever had before.

Solitude. Ward or woe? The answer lies buried in the minds of the mad shades.

Solis embraces her task as Gardener of the Well. Who better to tend to the flora edged in perpetual sunlight – surrounding the tomb of spirits – than someone who is half-dead herself? But when a necromancer arrives on the island, demanding entrance to the Well, her solitude shatters.

Spirits are the only good company, in Resz’s opinion. So when he senses the glut of souls in the Well, compulsion drives him to find them. Unfortunately, a strange woman denies him access. And worse, he’s inexplicably drawn to her, as he’s never been to another living being.

Solis risks control of her own soul to keep Resz out of the Well. Can she convince the necromancer to abandon his quest, or will he pull her strings like a puppet master?