Do Not Go Gentle - Excerpt

It's release day for Do Not Go Gentle! A dark fantasy with spirits and necromancy, perfect for this time of year.

This short story is a prequel to my upcoming novel, Dead As Dreams, which is slated to release in 2023. Lazarus, our main character in this story, is one of the two main characters in the novel. And the series title at present is Saga of Souls & Dreams.

Currently, you can buy a copy of Do Not Go Gentle from Amazon only. It's available with a Kindle Unlimited subscription, though, too!

I hope you enjoy the excerpt below, and may it tickle your curiosity for my forthcoming novel, Dead As Dreams. Happy reading! 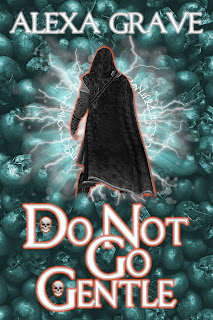 Lazarus hated the cold creeping in, taking over his body, his life. He hated the endless graveyards, each tombstone etched with the symbol of the god Lokahn, bull’s horns attached to a human skull and a flame underneath. And he hated the curse he’d been born with — the power of a spirit seeker.

But most of all, he hated watching his mentor, Borko, send off the lingering spirits, choking their wills before flinging them into an unknown plane. So painful and cruel.

All of it reminded him of his appalling mishap. Over a year ago, he’d accidentally resurrected his dead sister, Sara.

Lazarus’s mother had cast him out after what he’d done to his sister, and he’d been traveling with Borko ever since. Her rejection still ached beyond words, but he understood, especially after observing Borko’s magic at work on a near nightly basis.

Spirit seekers were monsters, hunting down the souls of the dead who still clung to Bodhira, then banishing them to... Well, no one knew where exactly. According to Borko, it didn’t matter where they ended up, as long as they lost the ability to torment the living.

And even though Lazarus hadn’t sent off any spirits on his own yet, he was the worst of the monsters. Poor, Sara. Borko had never committed such an atrocity as raising the dead.

Lazarus had questioned his mentor about the incident once, and the man had growled and poked him in the chest. “Never. Never try that again.”

Not that anyone needed to admonish him. Sara’s shambling form still haunted his dreams, and he feared it always would.

“Come. Join the bones you left behind. Come.” Borko’s intonation beckoned to the spirits as he knelt in the middle of the burying ground, the brilliant purple orb around his neck brushing the earth. The chief of this town, the silent onlookers, and Lazarus all waited outside the gate.

In his dream, his sister had clawed her way out of the grave, true to reality, but instead of heading toward their house as she had a year ago, she turned on him. Curses spewed from her unhinged jaw, and she staggered toward him, head tilted at a sharp angle due to her broken neck.

Lazarus had stood rooted, heart thudding in his breast as she approached. A sliver of fear wormed its way to the surface, but guilt quickly gobbled it up. He’d done this to her, and he deserved all the harsh words she flung at him. Along with whatever punishment she deemed fit.

The nightmare had ended with Sara descending on him, pulling him to the ground, then dragging him back into her grave where she slowly devoured him, stretching out the pain and agony. Her prolonged torture mangled his soul.

To send souls off requires a spirit seeker to choke the ambition out of them...

Lazarus curses the power he was born with. The power of a spirit seeker. And he curses the memories that haunt him – his sister rising from her grave due to his magic.

Now, his mentor tasks him with sending off souls on his own for the first time. But his memories cause him to question why the spirits linger... And why his mentor deals with them so violently.

There has to be a better way, and Lazarus intends to find it.