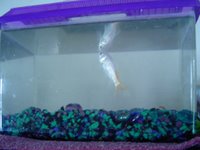 Some of you are going to think I'm nuts. So, I'll admit I am upfront and get that out of the way. Today, my blog entry is solely concerning my goldfish. I know I've posted this pic before, but it's the only one I have of him. It is with much sadness I report that my ancient, crazy fishy has passed away.

It was already July 4 (about quarter to 2 in the morning) when my husband and I found him no longer swimming. He had seemed fine as ever around 8pm. For those of you who know me well, you know I got him on July 4 thirteen years ago. I am more than sure he made it to midnight when it officially became the 4th and just decided 13 years was long enough.

I'd like to give a little history. He was more than just a fish to me. His name was Sterling Stars and he was won at a festival with a friend called Golden Stripes (who sadly escaped down the drain one day while cleaning - and I have no doubt she would have lived just as long if not for that incident). Stars and Stripes Forever - yes I was thirteen myself at that time, I had to think of something cute like that since I won them on the 4th of July.

The thing is, I've associated Stars with my writing for the longest time. A month or two after I won him is when I started the novel that took me all of high school to write (I know how bad that novel is, it will never see the light of day, but it was the fact I was undertaking that and that was really when I first got more serious about writing). So, in a sense, he was a fishy muse. He was supposed to have lived until I got a novel published!

Stars was also no normal fish (it seems nothing I own ends up being normal). he was crazy.

*** He insisted that all his stones on the bottom of his tank were not in the proper place, therefore would move them around. One time I did an experiement and put all of one color on one side and then another color on the other side. by the time I had to clean his tank again, they were all mixed up.

*** He also refused to eat quietly. You put the fish food in and you would swear the loud bloop bloop bloop you heard was a cat playing in water, not a little goldfish eating.

*** Instead of living a long healthy life for a goldfish, he figured THIRTEEN years would be much better so people could ponder at the unimaginable age he was.

*** And to top it off, he had to go out with a bang. He couldn't just die on any old day of the year. No way. Exactly 13 years to the day that I won him was when he swam his way to his next life. Now that's a fish with timing and a sense of drama!

You bet your butt he'll be mentioned in my dedication page WHEN I get my first novel published.

Stars will be greatly missed since he had been through a lot with me and traveled with me the many times I moved (even in dorm rooms!). And I will ignore all of those that tell me he was just a fish. He was my Stars, and it will not be the same without him around. :(
Posted by Alexa Grave at 7/04/2006 04:43:00 PM