J. Gunnar Grey is guest blogging! She has been my critique partner for several years, and she's a great writer. For more information about the author, please scroll to the bottom of the article. Enjoy! 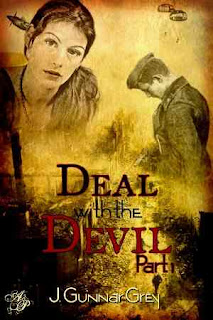 So the epublisher loves your story and wants to publish it. She forwards you a contract. You start reading and it's gobbledygook. There's no substitute for a good contract or intellectual property attorney, and I certainly don’t claim to be either. But here are some of the paragraphs likely to be included, what they mean, and what you should avoid.

First the contract should specify what it covers. This includes the name of the publishing company, the author's real name, the title of the manuscript, and the contract date. The date is important because contracts of this sort are bound by a time limit. More on this later.

Second is usually the publishing rights, which the author is granting to the publisher. This can take a number of forms, such as exclusive world rights, English language rights, North American rights, and so on. Rights can be further broken down by media, e.g., print-on-demand (POD) paperbacks, traditional print run trade paperbacks, audio formats, or the most popular right now, readable (text) digital format.

It used to be the case that authors jealously guarded their rights, selling different rights to different companies in different deals, which added together to total a more attractive sum than the straight paperback advance. In fact, this was considered an important part of the agent's job, getting the best deal possible for the author across a broad spectrum of the entertainment industry, including the movie option and audiobooks. This is less important than it used to be, because most epublishers don't want your movie rights in any case. Again, more on this later.

The third section generally covers what the author guarantees the publisher, and that's a manuscript that's free and clear of encumbrances. The author must warrant (guarantee, in layman’s English) that no one else has any right to the story. If it was previously published, all rights must have reverted to the author, who will generally be asked to provide written proof of this reversion.

Other paragraphs in the contract are likely to cover:

Some specifics:
There are so many possible red flags, there's no way to list them all. But here are some of the more common or outrageous ones.
Some epublishing contracts are straightforward and easily understood, but others are complex, professionally prepared, tight legal instruments. There's something to be said in favor of a company that utilizes a basic contract, as it implies a willingness to be flexible and work out issues with its writers. But there’s also something to be said for a company that wants no grey areas where misunderstandings can form. Each writer considering such a contract should only sign if he's comfortable with the terms. And it's worth repeating—if there’s any doubt, there's no substitute for a legal beagle on your side.

J. Gunnar Grey has never wanted to be anything except a novelist, so of course she’s been everything else—proofreader, typesetter, editor, nonfiction writer, photographer, secretary, data entry clerk, legal assistant, Starfleet lieutenant commander, stable manager, dancer—and no, not that kind of dancer. Her long-suffering husband is just excited she’s actually using her two degrees, one from the University of Houston Downtown and the MA in Writing Popular Fiction from Seton Hill University. Gunnar writes novels that are mysterious, adventurous, and historical, but all sorts of other stuff can leap out of that keyboard without warning.

The first part of her novel, Deal with the Devil, is currently available from Astraea Press, Amazon, and Barnes and Noble (and you should go buy it - it's a great read!). She also published a handy book that every writer in e-publishing should have: Format Your eBook the Free and Easy Way.