Only Metaphor by Mike Mehalek

I was never good at writing fantasy. Even when I was a kid trying to mimic TSR’s (now Wizards of the Coast) choose-your-own adventure books, I knew something was missing. I still have those handwritten pages tucked away in an undisclosed, I’ll-take-it-to-my-grave location--Okay! Okay it’s in the filing cabinet under the printer, but you’ll never find the key (because the drawer doesn’t lock)--and they are pretty terrible pages. It’s a combination of inexperience, anachronisms, trying to copy something that has already been done, and not knowing how to incorporate the creative backstory and characters without just dumping them into my tale as carelessly as I dump sugar into my coffee each morning.

What really made this story and most of my fantasy writing crap--hell, almost all of my stories suffered this tragic flaw until I discovered the grizzly (and obvious) truth--was their lack of an ending. Not just an ending but a middle, and a late beginning too. You see I suffer from a genetic writing disorder on chromosome 20. Many people have this disease, but fortunately most are not writers. You see, where most writers possess a metaphor gene on chromosome 20, whether they know it or not, I have none. 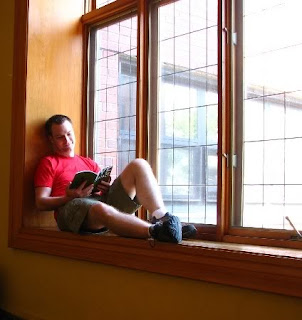 The metaphor gene allows writers and storytellers to sprinkle symbols, language, characters, character actions, plot points, colors, textures, sights, sounds, setting, motif, irony, and other literary tools to convey a central theme or themes to their readers. Some readers lay it right out in front of you (Some writers can do it so readers “get” the metaphor without ever mentioning it, while others place it right before the reader so that his or her psyche can gorge on it like some sort of book vampire. (Tolkien’s Lord of the Rings, for example, and Paul Harding’s Tinkers both explore the passage of time, coupled with the desire to return to the past, the former implicitly, the latter explicitly). A book’s metaphor is its lifeblood. Without it--call the morgue--it’s a “dead” book.

Enter Only Human (OH), the current name I am using for my urban fantasy manuscript, which was named Dragon during my sojourn at Seton Hill University. OH came into existence years before, as this question: what would it be like for a dragon if it had to spend its existence as a human? The question got me started on the manuscript, but it was an indirect question; and as I’ve previously mentioned about my writing, I never could make it beyond the first few pages before the story fizzled out. As I explored this question through the writing of OH, I realized that what I was really asking of my manuscript was “what does it mean to be human?”

It occurred to me, if I were to explore this theme, then my dragon needed someone in his life--someone that he cared deeply about. The creation of the character Kevin was a direct result of this revelation. And the story started writing itself. If I hit a wall, I spent time, mostly unconsciously, exploring that central question. What does it mean to be human?

More and more pages revealed themselves to me. Stressors from the plot points and action sequences created new interactions with these two characters and as much as I feel that OH is chockfull of violence, gore, humor, and suspense--the theme of love was all over the place; and when the final bullets flew and the six-inch long teeth stopped crushing bones to dust, my metaphor emerged from the flotsam. Love is what makes us human, and true love cannot die.

OH was insightful to me as a first time novelist in both its message and its use of metaphor. Despite my genetic makeup, I know that it is possible to write meaningful fiction and to complete volumes of prose if only I keep at it with persistence, dedication, and metaphor in mind.

So let me close with the words from a very dear friend of mine, a dragon, who taught me a little more about life than I did before I met him, and wish that you and your writing find “all the things you need, not everything you want but what you need. And I sincerely hope that every once in a while you too receive something better than you deserve.”

A friend once told Mike Mehalek that "writing will set you free," and he’s bought into that philosophy 110%. To him writing is a way to escape from reality, a means to earn a living, and a way to show the world that one person can make a difference. He feels fiction should be enjoyable at the surface, but it should also have enough depth that those willing to dive for it can find greater meaning. In 2008 Mike graduated from the Writing Popular Fiction program at Seton Hill with his thesis Dragon, an urban dark fantasy.

NEXT UP: Another article in the MGOC Fantasy Series - Heidi Ruby Miller! Strike that, Heidi will not be until the following week. I've been informed that next up will be K. Ceres Wright!
Posted by Alexa Grave at 7/06/2011 12:35:00 PM