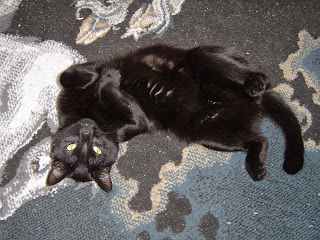 This is a really hard post to write. I've posted about losing pets before, but at the end of April we lost our almost 14-year-old black cat. He was the sweetest and most loveable cat, and he was my Buddy Boy. Before we had our kids, he would make sure to nap in whatever room I was in. Even after the kids, when I was at the computer at night before bed, most times he'd be curled up near me on my husband's chair. Saying I was very attached to him is an understatement. So, I'm going to dive in with a list of all the things I remember about my unique kitty, a kind of kitty I know I will never likely own again. I reserve the right to edit this post in the future to add anything I forgot (there's just so much and my memory can be wonky).

❦ He was one of the meowiest (is that a word?) kitties I have ever known. We knew from the first night we got him as a kitten that we would never have a quiet night again while he was around! Therefore two of his nicknames were Mr. Meow and Meowhead. His purr was also crazy loud.

❦ He was also our Crooked Kitty. His tail had a notch at the base, and a couple notches at the tip. We don't know if he was born that way or if he got hurt as an itty bitty kitty before we adopted him. When I was taking a ceramics class in college, I made him a crooked bowl that said Crooked Kitty.

❦ He was our Great One-Armed Hedgehog Hunter! He loved to bring us presents--mostly sparkle balls, but one of his favorites was the hedgehog (which only had one arm). During the day he'd bring it downstairs, then at night while we were crawling into bed, he'd bring it back upstairs. Of course, he'd meow the whole way on his trek with the cat toy in his mouth. We knew he was coming! 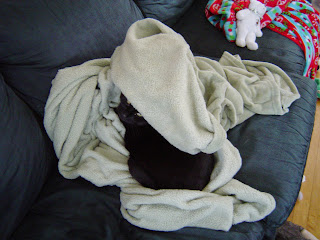 ❦ Oh, and he was part dog. He enjoyed playing fetch with his sparkle balls. AND he loved to dig. No, not in dirt, but in blankets. Many a time I ended up sitting on him on the bed because he dug his way under the blankets.

❦ He had a little black cauldron full of his sparkle balls. He loved picking those things out of there.

❦ We constantly had to clear sparkle balls out of his food bowl because he thought that's where he needed to deposit them. And he preferred to drink water by dipping his paw in the water and licking the water off his paw. NO cup filled with water in the house was safe. Many times I found an untended cup of water with litter in the bottom. Ew!

❦ He enjoyed chewing the tails off of his toy mice. He also enjoyed chewing string in half. He'd always ruin the ball of string for one of our other cats that's no longer with us. Pikachu loved them. Roland would not only chew the end off, but for good measure he'd chew it into several little bits (he never ate any of the bits, though).

❦ He was our Needy/Kneady Kitty. The first because he shamed those people that claim cats are independent. He wanted attention. And then he wanted more. If we locked him out of our bedroom temporarily, we heard his unhappy meows begging to be let back in. He insisted the first thing we did when we woke in the morning was give him itchings. The kneady part though was because he loved to knead. Especially our jeans...when they were ON us. I was insanely glad that we had his front claws removed because then we could allow him to knead to his heart's content (though he still managed to knead a hole into the corner of our current bed skirt--heh).

❦ Sometimes he would lie on his back and play with his tail. It was his way of trying to get our attention (it worked most of the time).

❦ At night, he preferred sleeping in between my husband and me, but when the kids took that spot, he decided sleeping on my husband's pillow was the next best thing. Who wouldn't want back claws tangling in their hair at night?

❦ That meow I mentioned? Yup, our little alarm clock...usually earlier than we intended to get up. And when going to bed, he would meow for a good 10-15 minutes too because, no it's not bedtime, it's love the Roland time. 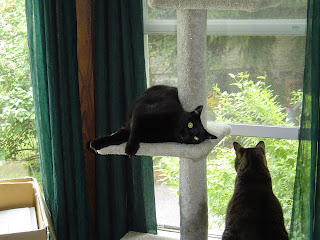 ❦ As mentioned he was my Buddy Boy--probably his most used nickname. Baby Boy Kitty, Little Black Cat, Monster Meow, Fuzzy Boy. More nicknames. He had so many! (For a short time at the end, he was also Demon Kitty, due to his glowing eyes in a picture I had taken of him.)

I feel like there should be a lot more to this list. We had nearly 14 years with Roland, but it's so hard to remember all the crazy, silly, lovable things he did. Perhaps this list is enough, but my heart says it isn't, merely because it will never encompass and truly show what kind of kitty Roland was. It'll have to do though.

NEXT UP: The Plan (What's this? Is the suspense killing you yet?)