It's time for an update! Aren't you all so lucky. Don't care about what's going on with me and my progress? Feel free to skip the post. But I can't promise you won't miss something super crazy awesome if you do.

The Plan is unfolding nicely, so far at least. I've been posting parts of "Dude in Distress" to Wattpad twice per week now. The last section is due to be posted on July 10. So, if you're curious if the unicorns manage to save Dom from Big Bad Girl, please pop over to Wattpad to read the story.

Chains of Nect will roll out on Wattpad starting July 17, and there will be a new scene posted every Friday. I already have two scenes good to go, and this month I'll be participating in Camp NaNoWriMo which should net me several more scenes--it's nice to be ahead of the game, just in case something happens! (Like last week when I got sick and my writing schedule went to hell.)

Interested in reading the prologue of Chains of Nect 8 days before it releases on Wattpad? Then you should sign up for my newsletter (form is to the left) because the first issue will go out on July 9 and include a sneak peak of the prologue. The main goal of the newsletter is to announce my upcoming publications, but I'll also have some bonuses in them now and then. If you're worried about your inbox filling up, I'll send no more than one per month, sometimes less frequently.

Oh, but you want to know what Chains of Nect is about? Of course, of course. Here's the blurb:

Obsidian successfully plays the game expected of her, passes the tests, and is accepted as a Guardian. Though she jumps through the hoops, she doesn't want to follow the precepts at all, to guard the portals but never open them. She believes its a waste to not explore the worlds within, like her ancestors had. How can they protect themselves if something comes through the portals if they don't know what's in them?

Obsidian's appointed mentor, Damian, is a straight-laced young Guardian, who can't contain the young dedicant. He's always believed the laws are in place to protect all of Nect, but Obsidian starts to make him question his own principles. She doesn't allow him any time to examine the possibilities, though, and he has to decide between reporting her or standing by her side to protect her from whatever horrors she stirs up.

Will the Guardians end Obsidian's life, or will something from another world get to her first? 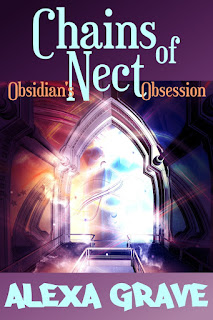 Not enough for you? Fine you've talked me into it. Here's the cover!

I've also been playing the Short Story Submissions Game. The intention of this game is to gather as many rejections as I can. Yes, I know, the point should be to get as many acceptances as I can, but if I aim for that, I'll just depress myself. Here are my tallies for 2015 through June:

I may not hit 100 rejections this year, however I hope to hit at least 50! And yes, you noticed, there's one acceptance. I had that story listed at the top of The Plan. "Bloodstains" will appear in a limited time fall anthology through Dingbat Publishing (anthology title and publication date still to be determined). That should be a fun set of stories.

I'm also still running Writing Quest every month--feel free to join us if you have some writing goals.

I think that's all as far as writing goes. Probably leaving the state of my house out of this post is the best idea (scary pretty much sums it up). I get writing done and everything else gets neglected. Go figure. Though the evil kitchen is due to be remodeled this month, barring more delays.

I feel like I'm forgetting to cover something, though. What do you think? Is there something else I should have touched on?