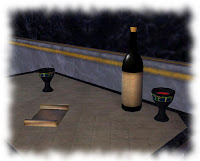 What's going on? Morrigann remembers the tempting glass of wine offered to her. It was delicious, but it had an odd aftertaste. Who was it again that poured it? The world is all fuzzy and she's drifting away. She swears she only had a few sips, no where near enough to get drunk. 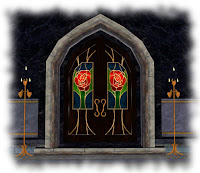 A moment of brief lucidity. Beautiful doors. Such gorgeous stained-glass windows. Where is she? Why can't she seem to move? How did she get here in the first place? Too many questions--she's never been this drunk before. Never blacked out before. Her vision fades again as she stares at the colors of the glass. 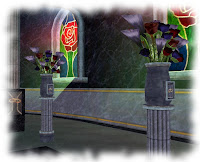 She returns to consciousness once more. Sunlight filters into the windows, and she smells the flowers. The heady scent wafts into her nose, making her feel as if she's floating. Odd. She definitely prefers flopping to casting Dead Man Floating on herself. She needs to stop waking up in places she has no recollection of wandering to. Before she can try to process her location, blackness takes her. 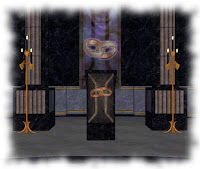 An altar? Is she crashing another wedding? She swore she wouldn't again, not after the last time. Those wizards still give her nightmares, and she was lucky to escape with her life. No way she wanted to be in another chapel! But it does look like an altar.... 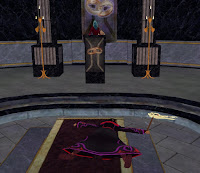 Instead of drifting off into nothingness again, her vision clears and she finally focuses on her surrounding. Here she is, flopped in front of an altar. What is she doing here? Who did this to her? She tries to get up, unsuccessfuly, but she hears movement and grunting, as if someone is dragging another body, like they must have dragged her. She must have been drugged with the wine!

Eek! Morrigann's been saying that way too often lately. The other body they pulled next to her is that of a shadowknight. And there's another shadowknight looming next to her. She's been caught in a broadsword wedding! She doesn't want to get married, especially to a shadowknight. No way, uh uh. The tip of the looming shadowknight's sword looks way too sharp. 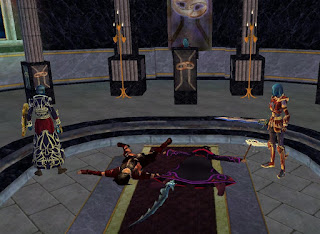 But she has to risk escape. Thankfully, she comes to her senses soon enough before the minister has a chance to make the marriage binding, and bolts through the chapel doors, narrowly missing the sweep of that wicked sword.

Not only is she going to avoid weddings, but it might be time to lay off the wine as well. Time to stay upright for a bit instead of flopping through life.

NEXT UP: New Cover for "Dancing in the Wind"