Fractured Fairies: Immortal Woes & Ode to Buses and Libraries released on Tuesday! I thought it would be nice to offer a brief snippet from "Ode to Buses and Libraries." So, here it is. If you like what you read, consider visiting Amazon and snagging a copy. It's also currently available through Kindle Unlimited and Kindle Owners' Lending Library.
❦ 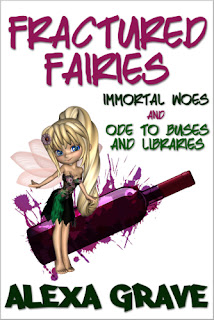 "So, you're going to send us five hours in the opposite direction when our destination is only an hour away?" The nerve.

I scramble over the counter and yank the metal chain around the centaur's neck, the one proclaiming him "Too Cool." "Look. We wouldn't have been late if it weren't for the damned bus driver." The ogre went in circles to waste time, I know it. Not to mention the restroom break. Syndago learned it was a bad idea to enter a bathroom just after an ogre finished taking a two-hour crap. "I won't stand for it."

The centaur shrugs, as cool as the chain I hold him by. "Nothing I can do."

The centaur's head explodes, splattering all over the kiosk. So much for Syndago's warning, but sometimes my power has a mind of its own. Really.

Two short stories about a sea nymph with a bad attitude, a potty mouth, and the power of destruction.

Nothing like having a suicidal not-so-giant giant as a best friend. Unless you also have a couple of drunken fairy pests tormenting him about his small stature. Grinka's the lucky sea nymph who has both. Between comforting her friend and stopping the lewd fairies from taunting him with a suicide powder, her temper gets the best of her. And when it does, things explode.

"Immortal Woes" received an Honorable Mention in Quarter 3 of the 2015 Writers of the Future Contest.

Ode to Buses and Libraries

Grinka has a maddening itch on the back of her neck. And the only place she can find any answers about her skin condition is at the library in the Immortal World. Of course getting to the library isn't easy, especially when riding the Immortal Express bus line. Between a lackadaisical centaur and the drunken fairy twins, it's a wonder Grinka hasn't exploded them all. Oh wait, she has.