This Is Where I Stand Snippet

Tales of Chyraine released yesterday! It includes two stories, "This Is Where I Stand" and "Cold, Oh So Cold." Right now, it's available via Amazon, and like the last two releases, you can read it for free using Kindle Unlimited or the Kindle Owners' Lending Library.

If you're interested in a snippet from "Cold, Oh So Cold," I'll be sending one out in my Newsletter tomorrow - so Sign Up Now if you haven't yet! But I won't leave you completely hanging. Here's a bit from "This Is Where I Stand." 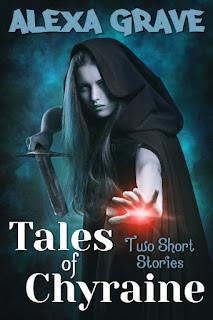 This is where I stand: in the kingdom of Ambrosia, within the palace, in my spacious yet suffocating room, before an open window which faces northwest. A broadsword rests on the stone windowsill, my sword, once my father's sword. My hands are upon the steel blade. I can just see over the palace walls, beyond to the rolling hills dotted with wildflowers and groves of trees.

This is where I wish to stand: further northwest, over the wall, beyond the moat, across the hills, and through the trees, where lies an invisible line with the forests Destiny to the east and Feargate to the west. My spirit brushes the trees that tower over the passage and shadows that line, into the kingdom of Trugor.

But that desire is irrelevant, for I am the Queen in Waiting, the one of all the young female warriors of Ambrosia to emerge victorious in competition. Sometimes I ponder what the waiting means. Waiting to become Queen, waiting to be recognized, waiting to have all the weight of a kingdom's people on my shoulders, hanging on my every word and trusting me implicitly... waiting for the old Queen to die. And in turn, one day another Queen in Waiting will be waiting for me to die, when I'm old and wrinkled, and the people cry out for fresh blood.

This Is Where I Stand

A warrior torn between obligation and desire.

Zenya fought for and won the right to be Ambrosia's next queen. Now, she waits for the current queen to die and she finds the honor her aunt forced her into is instead a burden. She longs for her childhood home, Trugor, where magic drifts on the winds and infuses every blade of grass.

Those in Ambrosia think magic an abomination. If the reigning queen discovers Zenya's heritage and thoughts, a quick death might follow. Possibly that would be the kinder fate, since her desire to return home and breathe in the magic consumes her. How can Zenya rule a people she despises?

Hearts of men as frozen as the kingdoms they live in.

Hear the static of a radio? Feel the chill sink into your bones and refuse to leave? Then you must be in the three Ice Kingdoms of Chyraine. No matter where you turn, the icicles can be seen forming in the hearts and minds of all the inhabitants. Or being driven into their backs and throats by their enemies.