Hell Hath No Fury releases in two days! It's currently available for pre-order from Amazon, if you happen to like what you read below and need to make sure it's there for you to read ASAP on Saturday! ;) It will be available through Kindle Unlimited and the Kindle Owners' Lending Library as well.

This one is a novelette, so a little longer than most of the short stories I've been publishing. It has humor, snark, and romance. What are you waiting for? Just read the snippet already and see what you think! 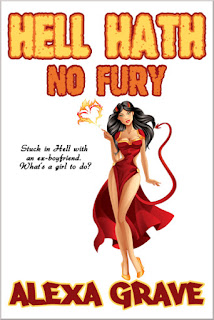 Now Jared stared at me.

"What?" I asked. "Do I have a third eye on my forehead or a zit the size of a tomato on my nose?"

He shook his head.

Then the knowing feeling settled in my chest. He had prodded me in here. Jared might be dead, but there had been only one thing he wanted whenever he tried to get me alone.

He stepped up to me. "You think that's what I want? Please. If dying the way I did wasn't enough, being dead does nothing for one's libido. I just wanted to get you out of there. It's good to see you, Moira." He touched my cheek.

A thrill shot through me at the feel of his skin on mine -- so warm. It felt alive. A knot tightened in my belly.

I didn't want this. I hadn't even felt this kind of passion well up for him when we were dating. Yes, the sex had been great, but this was a yearning that was hard to ignore.

I swallowed. "What do you mean?"

"That it's good to see a familiar face."

He laughed, pulling back. The desire dropped without him so close.

"Oh, that. We're dead, Moira. We don't have needs like we did when we were alive. Are you hungry?"

I had to concentrate before I answered. No biting in my stomach, although I had been starving before the collision. "No."

That I'd think would be a yes. I mean, I was in a bathroom. It was stupid to have a bathroom if no one needed it, but I didn't feel any urge along that line. I shook my head.

His body pressed against mine flooded my lower regions with heat. From the questions he had already asked, I assumed the answer to the latest was supposed to be no also. My body spoke to the contrary, tingling at the feel of his fingers digging into my hip.

Stuck in Hell with an ex-boyfriend. What's a girl to do?

Moira died. Of course, she never expected to appear in Hell once she did. But Hell isn't the fire and brimstone place so many people fear. More like a cross between an office building and a dormitory. And the devil, a sexy, disembodied voice in an endless expanse of darkness, sticks Moira with the job of Welcomer for the second floor of Hell. A job which comes with a skimpy little demon costume.

If that isn't enough to drive a strong-willed woman into fits, Moira finds out she's on the same floor with Jared, an ex she'd rather forget exists, only now she feels a strange attraction whenever he's around. Fun times.

To make matters worse, one of the new arrivals, Douglas, is a creepy old guy who stalks her and clearly doesn't belong. After a stomach churning confrontation with him, she decides she doesn't want to find out if she can die a second time. So Moira's got to find a way to shake Douglas, all while trying to come to terms with her conflicting feelings for Jared.

Who knew death would be as complicated as life?