Another release day! The Fortunes of Fate series is one of those series that's close to my heart, and with each story, I learn something new about the world of Fate and the tales unfolding between there and Earth.

So, I'm happy to announce that the third story, Reversed, is now available for purchase from Amazon! It's also on Kindle Unlimited. Remember the Tarot reader from Dreams in Shadow? Well, this story is from his point of view. Will you join him on his journey?

A small excerpt and the blurb for Reversed is below. Enjoy the sneak peek!

Also, Dreams in Shadow should be available from other retailers within the next month (it's no longer available through Kindle Unlimited, but it's still on Amazon). And don't forget Love Fades will be available for FREE from May 18th through the 22nd.

Have fun getting lost in the stories of Fate! 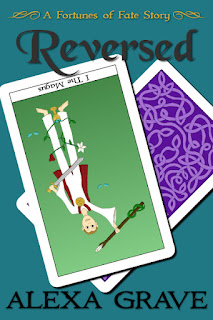 Darney pressed his hands to his ears. The screaming continued in his mind, though. The cards howled. And the heat from them in his pocket throbbed against his hip -- seventy-eight tiny hearts, skipping beats from their wounds.

That rotten child had done this.

Many people didn’t like what the cards told them, but the little girl had been the first to react so violently. The poor Fool card whimpered, creases refusing to even out after she crumpled it. At least half of the other cards were singed. Fire. Of all things, she had to use fire.

Delilah, his mother, had warned him, told him to protect the cards with enchantments. Such magic would have kept them safe for the most part. The fire wouldn’t have touched them. But he didn’t know how, couldn’t find the magic she claimed he had.

The magic he yearned to find.

He traveled from town to town in hopes that the next reading would be the trigger, the one that would spark the glow inside of him. And then he could truly bond with his cards -- they’d be an extension of him, not just a deck of friends he kept close.

In desperation, Darney seeks the help of Jasp, a well-known, but cruel, mage. Jasp is his last hope. Or his undoing and the cards' doom.