Yesterday was another release day! Time to take a different turn compared to those wacko fairies from last month. Sunset Street is a YA urban fantasy, and it definitely has a more somber tone.

Per usual, you can now get Sunset Street from Amazon!

I have also slowly been pulling some of my titles out of Select and going wide with them. I'll have a post in a week or two with more information and links.

Until then, here's an excerpt from Sunset Street. 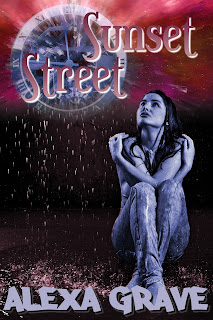 Rain showered down on the scene, an occasional flash of lightning and rolling thunder in the background. Kind of desolate. I wasn't sure if such a game would help me forget the ache in my chest or if it would only exacerbate it.

I squinted, catching a flash of green behind the rain. A street sign, labeled Sunset. Of course.

The bleakness made me reconsider my afternoon plans. To clear my head, I went to the window. It squeaked, as reluctant to open as I was to put forth any effort, but finally gave. The sweet smell of rain drifted toward me, causing my mind to wander and dream of less lonely times -- those few boyfriends who had ended our relationship before I felt it had even gotten started. My need to be with someone was a show of weakness, and once they realized that, it was all over.

I returned to my computer, determined to do something to distract myself. If the game still seemed too dismal after a few minutes, I'd stop.

But I studied the little scene a bit longer. Maybe the houses hid amazing adventures, the bleakness a facade. What would it be like to stand in the middle of that street? To think I was the only person left in the world?

I closed my eyes and took a deep breath, so I could get the full effect of the scent of the rain drifting through the room. The smell grew stronger and stronger. Ah, sweet rain. I imagined my upturned face feeling the drops shower down on me.

When I opened my eyes to play the game, I was no longer sitting in front of my computer. The scent of rain was overpowering -- I had given my imagination too much credit because the rain actually fell on my face.

I stood in the middle of the deserted street.

Be careful what you wish for.

Stuck in her dorm room alone on a Friday night, Leah can’t imagine her loneliness getting any deeper until she pops a new game into her computer... and gets sucked into it. Trapped in a world of darkness and rain, she fears she’ll never see another living soul again. Until she meets Zach. He may be the balm for her heart she’s been searching for, but fulfilling her wish comes with a price. Is she willing to pay it?