It's time for the next Fortunes of Fate story! Edge of Sorrow is the 6th title in the series, and the release date is March 14. Not just at Amazon, either. I'm immediately releasing this one to all the major online retailers. And when I say all, I also mean Google Play! As a matter of fact, in the next couple of days all of the Fortunes of Fate stories will be available on Google Play (in the next week for my other titles).

For now, you can preorder Edge of Sorrow on Amazon, Kobo, and iBooks. The 14th isn't that far away, right? The Google Play preorder should be up soon, and I'll add the link to the post when it is. No preorder at Barnes & Noble, but Edge of Sorrow will be available there some time on the 14th.

I actually have some other exciting news. The first story in the Fortunes of Fate series, Dreams in Shadow is FREE at all retailers right now (and on Instafreebie - it will be part of a group promo, but more on that next week). So, if you haven't grabbed a copy yet, your budget won't stop you from snagging your free copy at Amazon, Barnes & Noble, Kobo, iBooks, Google Play, and Smashwords. Grab it while you can. Not sure how long I'll keep it free.

Free stuff is good, but I'm hoping you're looking forward to the Edge of Sorrow excerpt. I have to say, this short story is my favorite of all the ones I've written so far to date. Happy reading! 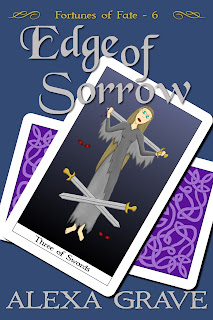 Jasp draped his arms over the gargoyle and rested his chin on his interlaced fingers. The stone bench was as chilly on his backside as the gargoyle was on his wrinkled hands, but he’d suffer through any temperature for his daily vigil, which had lasted going on two decades.

A plum tree rattled in the breeze as if it spoke to him. No other tree or bush in the garden stirred.

If only Yetta could still speak. Her voice had been that of a songbird. Sweet as honey. And all those other wretched clichés.

No one’s fault but his own, though. He’d been lucky he’d had enough magic to turn her spirit into a plum tree before she’d completely faded from Fate.

Although Jasp didn’t think she was too happy with her current status. Twenty years was a long time. “Sorry, Yetta. Can’t let you go.”

Can't let go? The external thought burrowed into his brain, clear as the sky if he hadn’t intentionally kept it cloudy and gray.

Jasp slapped the gargoyle on the head, and it woke up. It flapped away and offered a vexed look over its shoulder.

“Yetta?” Stupid question. The voice wasn’t hers -- he’d know it anywhere. A soprano. This one was an alto, saturated with accusation.

A calico cat with shimmering red eyes slunk out from behind the plum tree. No Yetta here. Name's Amber.

“Cat.” Jasp stood and stalked toward the creature, but it held its ground. He waggled a finger. “You’re the one who ruined my fun then with that Darney boy?”

Oh, no. I love some tormenting fun, Mage Jasp. Maybe more than you. That was probably my meddling sister Joslyn. And feel free to kick that Darney fellow for me next time you see him, if you’d like.

“Humph. Makes no difference to me. Punishing one cat is as good as the other.”

The cat sauntered closer and rubbed up against his old, ratty purple robe. Little minx. You don't want to punish me. A purr vibrated through his mind.

“No?” He squatted down and stared into her mischievous red eyes. “Why’s that?”

You need me to show you.

He wanted to kick her and her bothersome riddling. She’d destroyed his peace, gazing upon his dear Yetta in tree form. The only time his aging body quieted. “What do you want from me, you mangy critter?”

Mangy? Amber yowled. I'll forgive the insult, for now. I need you to... meddle.

"But you just..." Vexing, contradictory creature.

Meddling has its advantages. Just don't tell Joslyn I said so.

The woman’s skin blends into the gray of the bark, her body melded with the tree. And she weeps.

The mage Jasp spent the last two decades shuttered away in his crumbling mansion, mourning the loss of his wife, Yetta – his guilt and a couple of stone-brained gargoyles his only companions. He intends to continue his self-inflicted solitude, until the calico cat Amber appears. A malicious mage is imprisoning women and draining their life force. Amber insists the great and powerful Jasp must save them.

Jasp’s memory of Yetta spurs him to act. Making no promises, he follows Amber to the weeping women in the woods. But it’s not as simple as freeing them. It never is.