It's been almost a year since I posted about our Trio of Terror. Yup, that means they're no longer kittens! What happened? How did they become cats so quickly? Where has the last year gone? I ask myself that last question for so many things.

Anyway, I figured it would be nice to post a few more pictures. Even though they aren't kittens, they're still our Trio of Terror, after all. If you didn't see the previous pictures, visit Kitten, Kitten, Kitten and Kitten Intermission. The picture below is the 1-year anniversary pic from when we brought them home. They love that cat tree. And it shakes when Sylph or Shade jump up to the top tier. O.O 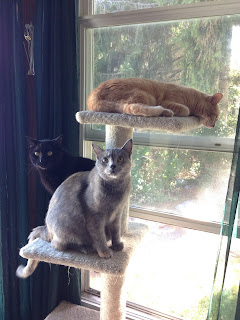 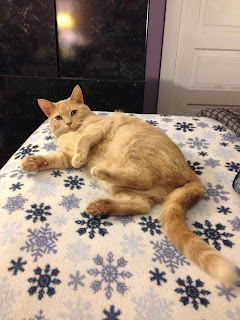 Look at Rikku. Doesn't she look so sweet and innocent? She's our smallest kitty (she was not the runt). She's also our lap cat who likes snuggles and purrs more than the other two. This is usually welcome except for when I'm trying to write or when her butt is stinky. =P Oh, yes, that sweet and innocent thing? Hardly. 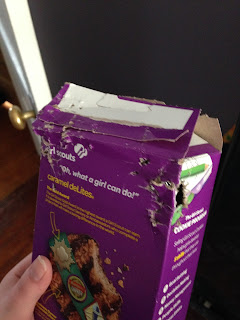 Rikku wanted some Girl Scout cookies. Thankfully, she didn't reach the cookies, or she would have needed a trip to the vet due to the chocolate. She's also chewed on the corner of my laptop, and enjoys chewing on the corners of my folders when I'm using them. Oh, and her or Nightshade also munched on my Fitbit. They are lucky they're cute. 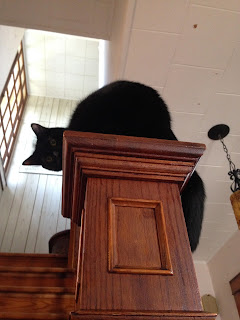 Nightshade is still the biggest climber of the three. And I say biggest because all of them like to be high up, but the girls won't jump on the counters (or the pillars) unless they have a chair to get them closer. Shade is still Boo Kitty. He's our derpy cat. Oh, so derpy. And he likes being a gargoyle on the stair railing pillars to get our attention. Our old cat Amara used to do this. He's not super snugly until he gets into certain moods, and then he's usually all over my eldest daughter. He loves her to no end. But he does put up with a lot from my youngest -- it's like he doesn't care if he's smushed or battered. See, derpy. 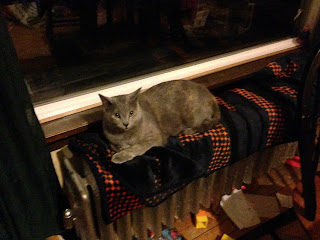 What happened to the runt?! Sylph is now the biggest cat of the bunch. Scratch that -- fattest. XD Even if there's food in her bowl, if I'm anywhere near the kitchen and she's awake, she's begging for food. Tubby Tortie. And don't think she's the good one that doesn't chew on things. I've caught her gnawing on my youngest's My Little Pony castle. As a matter of fact, a couple nights ago she woke me up because she was chewing on the plastic bins under our bed... And while she begs for love and attention, she only wants scratches. Don't pick her up! She insists she's not a lap cat at all. She's also the one who stays hidden when strangers (to her) are in the house.

They're all such naughty kitties, but we love them anyway. And who doesn't like cute cat pics? OK, sorry if you don't, but I think our cats our goofy and adorable. 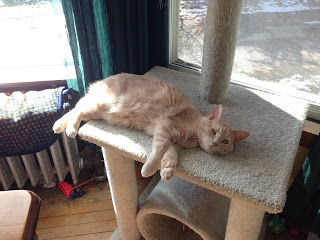 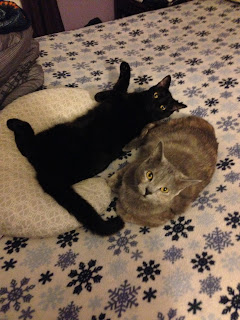