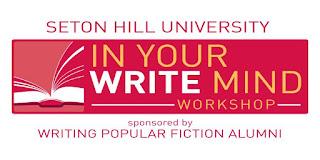 In Your Write Mind (which going forward will be referred to as IYWM) 2017 was a blast! It had been four years since I'd been able to attend - far too long.

Now, I know I should be going to things like this with the sole intent of propelling my writing career forward, but I have to be honest, I mainly attend IYWM to reconnect with a great group of writer friends. Many of us consider fellow Writing Popular Fiction students and alumni our tribe. Though most of us are introverts and uncomfortable in social situations in general, when we're at IYWM we feel like we belong. Seton Hill is our home away from home.

And of course it's sad when the few days we have to spend together fly by too fast! We can still reminisce and remember the fun times, though - the social aspect as well as anything learned and taken away regarding our writing careers. So, here goes. Shoving many memories into one blog post!

I took the train out, and though it was mostly overnight, I did manage to get a few words down (and even some on the way back... but we won't talk about the last few days after I got home - heh). Thursday was the official start of IYWM, and I took advantage of the Write In. Progress on Hell On Wheels (Devil made Me, 2)!

As a matter of fact, even a couple of the classes I attended helped me with the novelette. Friday, the true classes started, and the first I went to was Back-Cover Copy. And we had a chance to draft a blurb and get some feedback! Yup, the Hell On Wheels blurb is at least now partially done. Plus I attended the Food and Writing class, which was awesome (not only because we got some tasty food), but because I wrote about how Moira missed food. And then I realized I was right at the point in the first draft that if adjusted, the snippet would fit perfectly! Got to love when things work out like that.

Of course the highlight of Friday was the book signing. Unfortunately, with flooding and tornado warnings in the area, the signing didn't attract as many people as it could have. I was also insanely nervous, but I calmed down a bit as the night wore on - I actually couldn't believe how quickly the time flew! I sold a handful of copies of both Mind Behind the Mind and Dreams in Shadow (and did a couple swaps as well with some of my fellow authors). Lots of compliments on the Mind cover, too. Think I'll be less nervous the next time I attend a signing? Probably not - lol. The pic below is of me at my table. 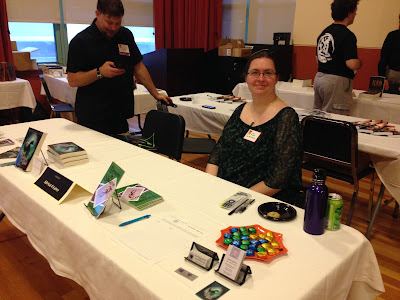 Onto Saturday, I attended the guest author's class as well as the author luncheon. Diana Rowland was the guest author this year, and she was great. Though I am a self-proclaimed zombie disliker, I ordered a copy of the first novel in the White Trash zombie series once I got home. OK, maybe I only hate the "Braaaiiinnns," kind of zombies. Ones who think and have personality are more up my alley. I mean, I do enjoy watching iZombie. Oh, and she showed us a few gruesome morgue pictures - I'm always up to learn about and see new things!

The costume ball was on Saturday as well. This year's theme was International Persons of Mystery. Spies! I didn't plan a costume to fit the theme, but I did get myself a new dress with little skulls all over it. And alicorn hair clips. I went with the whole the hair clips are mini daggers thing as an explanation. ;) Do you want a picture? I can do that. Here's a great one of me with a few of my fellow crazy writers. 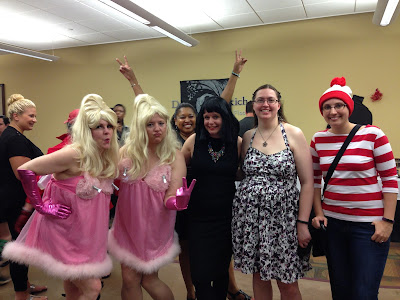 Finally, Sunday was a bit of a blur (probably because I had like three hours of sleep), and far too short. We celebrated the new graduates of the Writing Popular Fiction program at a luncheon to cap the day off.

Here's hoping I can make it again next year. It will all depend on money and if the hubbie has any conferences for work around that time. I'd also love to drag the family along, especially since the costume ball theme will be Storybookland! I'll be thinking about my costume for that one over the next few months. Any suggestions are welcome!