Wow, it's nearly been three months since my last Summoners War post!

As mentioned in my last post, I took the time to 5-Star many of my 4-Star (and some 3-Star) Mons on my Water/Light/Dark account. There's still plenty I want to 5-Star soon, but I now at least have a couple more good teams to run Tartarus Labyrinth, which is a fun (in my opinion -- some people hate it) option for guilds. This week we opened up all three mini-bosses and Tartarus himself in less than three days. Now we just have to beat them all down!

OK, I have to admit, I wasn't just 5-Starring Mons. Because... I pulled some awesome Nat 5-Stars that I needed to 6-Star! I definitely got lucky, since both Mons were Water and I can use them.

First, I got Verad. He was one of two options I had to choose from since my 5-Star Blessing still hadn't been used. I think my other option was also a Water Mon, but I hands down chose Verad. He's the dragon I've wanted for a while on any of my accounts, though I'd gotten the Fire and Wind one on my main account previously. Look at that pretty dragon roar. I'm already feeding him devilmon to skill him up, and I love him so much. He's a beast. 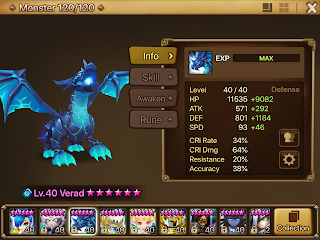 Not even a week later (I had a rather great string of luck in the span of two weeks on three of my accounts, after a super long dry spell), low and behold I randomly pull another Nat 5. No Blessing this time, but luckily it was another Water: Lightning Emperor, Bolverk! This is a newer Mon, so I was also pleased to get him. I've already 6-Starred him as well, but as you can see, I'm still in the process of getting him to level 40. He'll be next up for the devilmon after Verad. He has a rather interesting mechanism with gaining Knowledge from buffs and then performing a kind of hitpoint tap with his big skill. I love the graphics of the skill, too. 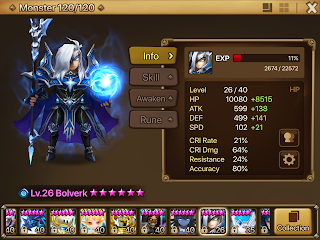 Oh, and I also finished my fusion for the Dark Ifrit, Veromos, plus I 6-Starred him, too! Man, I've been busy on that account. I don't even know how many other Mons I 5-Starred. Lost track! 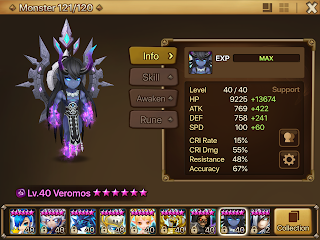 Aside from Nat 5 luck, I also managed to get my first Light/Dark lightning on this account. I pulled the Nat 4 Light Taoist (or Stick Boy, as the YouTuber Jewbagel calls them often), Hwadam. He's the next Light Mon I'm working on, currently building things up so I can 6-Star him. Also, he's nice and easy to skill up, since the Fire Stick Boys are only 3-Star Mons. I'd been saving a bunch for my Water Sticky Boy, but they all went to Hwadam once I summoned him. 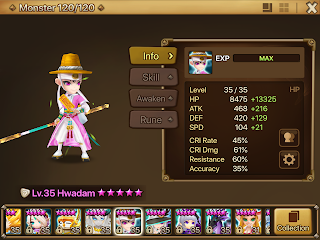 I'm also hoping I'll have the time to 6-Star at least one Dark Mon before my next post. Here's Gina, the Dark Mystic Witch. I love how the Mystic Witches look, and I wanted to work on her right away when I summoned her, but clearly, as seen above, several other Mons got in the way of that. 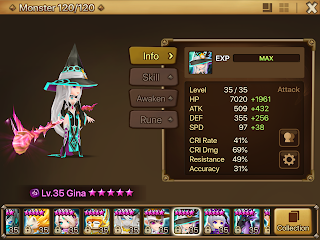 This month is also pretty exciting in Summoners War. It's the 5th anniversary of the game, and they've started a pretty awesome event. So, by the end of the month, I might have three more Light/Dark scrolls to possibly get some more Mons to add to my list to work on. Here's hoping for my first Light/Dark Nat 5 ever! (The odds of pulling one of these is 1 in 300 -- never got one on a single account yet.)
Posted by Alexa Grave at 4/17/2019 03:29:00 PM