Back in October 2005, I posted about a Fresh Distraction - a new kitten in our house. The post ahead will be brief, but it will be a sad one.

I feel it's only fitting that I write something about our cat, Amara, since I did introduce her on my blog all those years ago. This past April, we found out that she had a tumor in one of her eyes (she'd always had some runny eye issues that the vet was never able to clear up). It was a difficult decision, but we decided it was for the best that we put her to sleep, especially since there was no way of knowing if the tumor had spread or not. We gave her a few more months though, so she could enjoy some open windows, but we knew it was time when she was no where near as active as she used to be, and in June we said good-bye.

She wasn't my favorite cat (maybe because she was such a naughty kitty - lol), but she was still much loved. Below is a list of a few things about her. 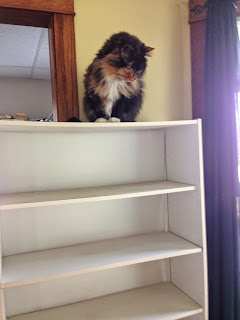 - Her name means unfading. Some of her nicknames were Fuzzle (or Fuluffle) Rat, Fluff Head, Fur For Brains, Dumb Cat (lovingly, honest!), and Kitty Girl.

- She was the naughtiest cat I've ever owned. She is the only cat I've owned that I've put a collar on because we needed a bell on her to know where she was if she was being naughty!

- When she'd try to sneak into the basement, she'd give herself away by meowing every step (and it was a special, she knew she was being naughty, meow).

- Cords? Chewed them, and not only as a kitten (she's the reason I switched to a cordless mouse).

- Plants? Yup, chewed those too. I had to keep putting them up, then I forgot about them, and then they died. =P

- Balloon ribbons, feathers, rag to clean eye glasses with, other various things that I can't think of right now - chewed those too!

- When we would pet her, she would drool, profusely (yes, this cat seriously had an oral fixation).

- She would chase Roland (my poor, Kitty Boy) around the house and she was so mean to him. She was his arch-nemesis.

- She was also a selfish kitty. She expected Roland to groom her, but she never returned the favor.

- When she'd stretch out on a rug, we'd call her Rug On A Rug. She also had huge paws.

- She liked to chase bugs and eagerly watched the birds outside, but when we had a mouse in our house, she didn't much care.

- She was also the Chicken (or Poultry) Fiend. Anytime we had chicken, she'd be begging us for some. And many a time she'd knock over the garbage to dig out the chicken bones in it.

- She would rotate her preferred sleeping areas. And one of those spots was a shoebox (I did say she was a box cat). Near the end, she rotated through some of her favorite spots daily, when usually she'd stick to spots weeks at a time.

- See that picture off to the right? That is our Fuzzle Rat, Dumb Cat on top of a bookshelf only a couple weeks before we took her in to be put to sleep. She was a great jumper. And no, she didn't know how to get down. I had to rescue her. See, there is a reason we called her Dumb Cat!

OK, I think that's all I can manage for now. I tear up easily. All of my animals become part of the family, and it's hard to lose them.