Lavender Legacy - Chapter 2: All Work And No Play

You can find Chapter 1 (a revised version from when I posted it on my blog in 2012) and the current chapter on Wattpad.

All Work And No Play 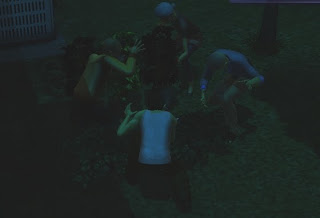 The same night the zombie decides Lila's garden is the perfect evening snack, her boss wakes her up requesting her to cook and deliver food for a meeting. No, she isn't going to cook for him. She needs her sleep, unless he's willing to give her the day off tomorrow! Demanding sod.

However, the next day she grudgingly accepts to take some petri dishes home to wash. Can't deny the boss everything. So she pushes through the strain and does a little extra work as well as tending to her garden. She lost an apple tree and a tomato plant to the zombie.

All work and no play makes Lila a cranky fairy! But she helps her boss with some research, leaving her extremely strained by the end of the next work day. At least she gets the next two days off--she intends to enjoy herself and unwind.

Fishing, special seed hunting, reading, and gardening--ah, now this is more like it. When she's more relaxed, she heads out to the Red Velvet Lounge. She meets Belinda Crumplebottom and has fun playing some fairy tricks on her.

Unfortunately the fun of the first day doesn't bleed into the next. Lila hopes to cozy up to that cute vampire firefighter, but once she invites him over, the night ends with both of them miserable and unhappy.

She drags herself back to work the next day, which ends on a good note--she receives another promotion. She promises to work hard as a useless contraption manipulator, still hoping a job more her style will come along soon. At least Belinda seems interested in some of her home-grown vegetables. If only that could make her enough to live off of.

Lila's hope is short-lived. The next day seems like any other day with work and gardening, but it's the full moon again. Another zombie appears, devouring her tasty plants. Then another shows. A third, fourth, fifth and sixth! Oh, no, her garden is in ruins. Only two plants survive the zombie feast. 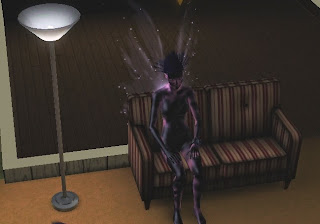 She doesn't think things can get any worse after all of her hard work was destroyed. But she goes into work the next day only to be caught in a lab explosion. She's lucky she escapes with her life, but she's left sad, strained, and singed.

Lila second guesses her life in Moonlight Falls. Will she be able to pick herself up and find happiness in this town, or should she move and leave it all behind?

NEXT UP: Update Time!