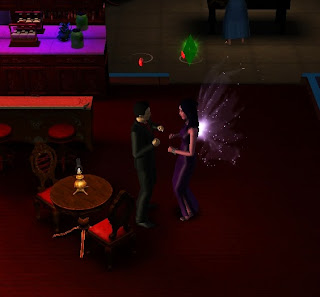 Lila's nerves start to get the best of her since she's forced to unclog her toilet before visiting her new neighbor. Not only is she sweating from the manual labor, but also from the thought of putting herself out there for more possible rejection. Not to mention, he could be a world class jerk. Silly fairy, getting her hopes up when she hasn't even met the vamp!

Eventually, she builds up the courage to knock on Drake's door. The rumors were true--he's drop dead gorgeous, and her heart jumps into her throat and out onto the floor when she meets his gaze for the first time.

He invites her in with a smile, and they talk about their interests as they watch some TV together. He's not a jerk! What a relief. But Lila can't resist flirting with him. She knows they just met. It's silly to think he might feel the same attraction. Insane, really.

Her flirting is returned, though. Too good to be true? He could be a vampire just looking for a good time, not one in search of a lasting relationship. Then she realizes it doesn't matter. To hell with it. She'll take what she can get and enjoy it while it lasts.

Lila spends most of the day with him, and their friendship and attraction grows. Drake is so much nicer than that curmudgeon firefighter! The day has to come to an end, though. And it ends perfectly--with their first kiss that makes her toes curl.

When she arrives home, she can't sleep, thoughts of Drake tugging at her mind. So she paints the night away.

In the morning, she regrets not getting more sleep and wishes she could spend the day with Drake again, but work beckons. One of these days she's going to be able to garden and paint to her heart's content without worrying about clocking in at a job just to make enough money to survive.

She bemoans her messy house before she heads out the door. Perhaps it's time to call a maid. One fairy can only do so much!

Even through her exhaustion, she makes an important discovery at work, one that earns her a promotion. It's nice to be noticed, first by her handsome new neighbor and now by her boss.

Perhaps things are finally looking up for Lila. Will her good luck hold, or is this just the calm before the storm?

NEXT UP: Magic Is Reality, Reality Is Magic - Yellow