Happy release day! This time Beguiling Moon, the fifth Fortunes of Fate story, is available for purchase on Amazon.

A little bit of passion mixed in with fighting against true nature! Although we get a cameo from Darney in this story, you do not need to have read any of the previous stories to dive right into this one.

But we need a 13 to make it a Baker's Dozen, right? My novel, Mind Behind the Mind will be the end cap to my experiment. If you want an early look at the cover, sign up for for newsletter (that form there off to the left) -- I'll be sending a cover reveal out tomorrow! Next week Friday, though, I'll post here with the cover and a blurb (and maybe even a pre-order link).

Guess I should get on with what you came here for. Without further adieu, an excerpt from Beguiling Moon. 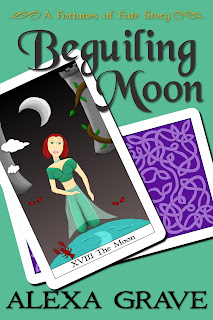 The power surged through Ero. Her legs trembled and her emotional distance shattered. Guilt and shame rushed in. Oh, Aelwyn. She gasped for air.

It drew Keeper Hris's attention. She made haste toward Ero, or as much haste as she could with that damnable cane of hers pounding on the wood floor with every step she took. The jarring couldn't even unsettle the severe bun on the top of her head, her blonde hair, streaked with gray, remaining fixed and immovable.

Once she reached Ero, she leaned in close and sniffed her. A grin spread across her face, like a cat who'd just caught an enormous mouse. "Ah. It's about time, Erolisi. I knew you couldn't resist for much longer."

Wicked woman. What did she know of what a Beguiler went through? She had no magic of her own. Her skin looked washed out, a pale peach that had grown yellower as she aged. It almost looked the color her hair once was.

Ero wouldn't satisfy her with assent.

"You seem to be having some troubles containing the power. I'll arrange a transfer for you immediately."

"No." She wouldn't be forced. There had to be a way to contain it.

"No?" Hris banged her cane on the floor three times. "I've never met such a stubborn Beguiler in all my years."

"Whip me. I don't care." She'd been punished plenty for holding out once she'd hit maturity. The pain of the lash was nothing compared to what the Keeper expected of her.

Hris cackled. "I don't need to punish you. The power inside you will eat you alive if you don't release it. Let's see how far you get before you break down. Again. This time, though, you risk your life by clinging to your stubborn ways." And with that, she dismissed Ero as quickly as she had been drawn to her, heading down the line to inspect and scold the others.

The hunger inside must be fed.

Erolisi's fought against her power her entire life. King Mayven of Cedar is desperate for an upper hand on the battlefield, and he's enslaved the Beguilers so he can use their magic. Erolisi refuses to be used. But in a moment of weakness, she gives in, feeding her need by drawing life force from her best friend, Aelwyn, and shattering their relationship in the process.

Now the energy Erolisi took must be released, fed to a warrior of Cedar to bolster his strength. This time she's determined to resist her power's call and no longer be a pawn. If she succeeds, though, her own magic will end her life.