The Adventures of Karriya the Wizard - Origin Story

The Adventures of Karriya the Wizard is a series based on the main character I play in Everquest. Though most of what I write actually happened, many events might be embellished and exaggerated to create a better story. Happy hunting (and reading)!
❦
On the hot summer day of August 17, 2004, Kariya (yes, one R here - not a misspelling!) the Wizard was born in Everquest. OK, I'm not actually sure what the weather was like, and she wasn't so much born as created because let's face it, not many MMOs take characters through childhood. But that's beside the point. Suspend that imagination of yours already! 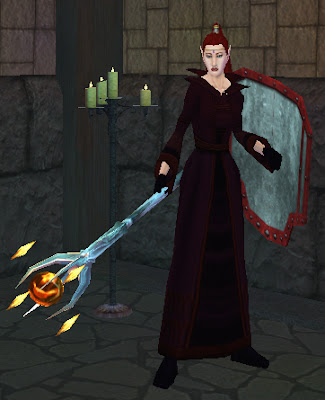 Karriya, 2006, With Epic Weapon 2.0
Now, Kariya was a haughty little High Elf, roaming the Greater Faydark, close to her home of Felwithe. Though the mobs she faced were pathetic, to her they were monumental. Until she grew up and could mass kill the whole zone with a single spell... That may just be the haughtiness showing through, though.

Anyway, she took up with a berserker named Yushuv -- a scarred Barbarian of few words. Together they eventually found a home in the guild Hands of Prophets. That guild changed to Legacy of Prophets before it faded completely, but I think I'm getting a bit ahead of myself.

While in Hands of Prophets, Kariya met many friends, most of which have disappeared into the ether. A couple, though, she still cavorts with today. One such being a well-mannered druid by the name of Rondor, and another an uber paladin called Eaiana. And she of course can't seem to shake that sometimes grouchy Yushuv. Never!

And then came a day of doom, where all those in Prophets feared for the outcome of all of their friends. A server merge. See, Kariya started out on Morden Rasp, a rather young server, and Morden Rasp was to be merged with Povar, one of the oldest servers. If someone had the same name as you on another server, the person who had the most time played would get to keep the name. The other person, would receive the dreaded X.

Kariya didn't get by the server merge unscathed (nor did several other of her family living on the same account -- that's how Leera the Beastlord became Maeve... and then following another sever merge, Maevve). The X of doom made her weep. She didn't want to be known as Kariyax! Those who received the evil letter were allowed to change their name, and so Karriya (who thankfully didn't get the X again in a future server merge) had her name legally changed. She still hates the extra R, though.

Time passed quickly in the land of Norrath. Prophets dissolved, she joined a guild called Valheru, which eventually changed to Sanity's Edge, and then she left that guild as well. And then, she made a guild of her own -- Dark Possession. I mean, haughty High Elves need to be in charge, right? Yushuv, the stubborn berserker, eventually joined her, as did some of Rondor's and Eaiana's aliases (*coughs* alts -- the name we give to characters that aren't mains).

It was an active guild for a while, but as we've seen, things always change. Dark Possession is still Karriya's guild, and she's littered the guild hall with cats, dogs, gnolls, and birds. There just aren't as many other active people in the guild aside from her aforementioned cohorts who often switch between many alts.

So, there you have it. Wait. I'm forgetting something? Oh, someone. Of course.

Karriya is the clear hero of the story, and every hero needs a sidekick! On March 5, 2006, Downpour, the Halfling druid who loves to hug everyone in her path was born. She's neglected once in a while, being left behind on occasion when Karriya wishes to venture out on her own, but for the most part Karriya makes sure to drag her along on her adventures, especially since the little druid can track mobs wherever they go. 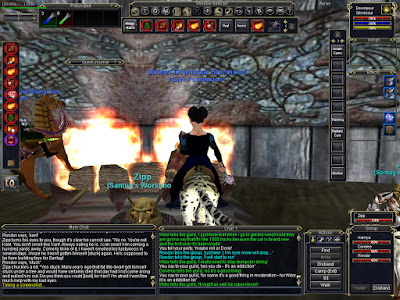 And so is the origin of Karriya the Wizard (and Downpour the Druid)! Now, over 11 years of adventuring under her robe, Karriya's happy to share her most recent adventures in Norrath. Who knows what she'll find with the stoic Yushuv or dragged into by the fastidious Rondor (who often plays his alt Wondora, a Dark Elf shadow knight, when wandering with Karriya).

Watch for the latest adventure! Maybe she'll even slay a dragon! Or just a bunch of blobs. Not all adventures are glamorous.