The Adventures of Karriya the Wizard - The Gods, Part 1

The Adventures of Karriya the Wizard is a series based on the main character I play in Everquest. Though most of what I write actually happened, many events might be embellished and exaggerated to create a better story. Happy hunting (and reading)!
Origin Story

The gods are many in Norrath... which is why this is merely Part 1 of the story. =D

Karriya has crossed paths with many gods in her travels, and it's well-known that once a god dies s/he doesn't stay dead. Which is why in one instance she can happily do a task for a god and in the other have to slaughter that same god. Fickle deities, they are.

But it's not as fun to talk about the nice things Karriya has done for the gods. Oh, no. It's much better to revel in her battles. And the battles have been many.

Some haunts of the gods are in the Planes of Power. These Planes harbor forms of the gods that are no longer quite as powerful as they used to be. Well, not for a level 105 wizard, at least. Though in her youth, she ran from them screaming... Wait no, Karriya the Wizard doesn't scream. She ensured that a full raid of her peers were with her and hid behind them. Please don't consider her a coward. Wizzies tend to splat gloriously -- she's wise, not craven. 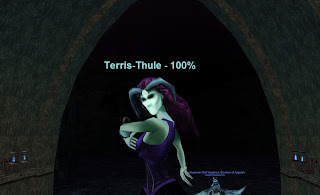 Still think she's not as brave as she claims? Well, here's our first deity to use as an example: Terris-Thule, The Dream Scorcher. Many years ago, she took too few friends along with her to Terris's lair, just outside of the Plane of Nightmare. True, it was her Fabled version that was waiting to be taken down (a much more powerful version than which is usually up), but she had confidence that they'd defeat her. Sadly, not only did she splat as awesomely as any wizzie can splat, but the rest of her group wiped as well. Terris was not taken down that day.

But recently, Karriya had her revenge. This time Terris awaited her (the non-Fabled version), and she was going to take the goddess out single-handed (nearly with a single spell), but friend Rondor decided he wanted to join in on the fun (I mean, you got to kill as many as you can for those god-slaying achievements). Downpour sat just outside the cave, waiting to hail the Planar Projection. She's a bit of a mooch like that sometimes. 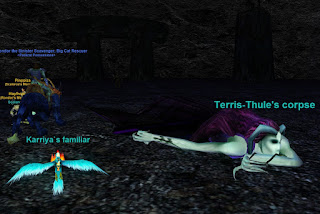 Karriya barely had time to commemorate the battle with some pictures before Terris Thule fell, defeated. No squishy wizzie anymore! At least not in the Planes of Power.

While there was great satisfaction in downing Terris, there was another fight in the Bastion of Thunder, another Plane of Power, that grew Karriya's pride tenfold. I know, you didn't think she could get any haughtier. Guess again. You have to remember, she is a high elf. 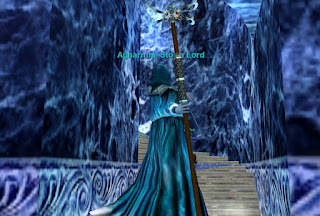 While not a full god (he still seems to count for that aforementioned god-slaying achievement, though), Agnarr, The Storm Lord, broods in his tower. To get to Karana, The Rain Keeper (a true god -- and to Karriya the only one that matters), adventurers must go through Agnarr.

Rondor was again along on this rather quick fight, and they climbed the last set of spiral stairs to be greeted by Karana himself. 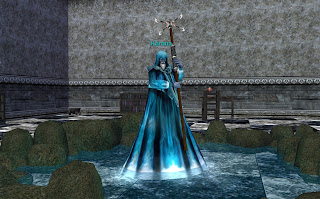 Karriya then devolved into one of those squealing teenage fangirls and insisted on taking some selfies with her god. Yes, her god. Who doesn't love a good thunderstorm? Karriya sure does. Downpour does too (her surname is Stormsoul), but the little druid kept her composure in the presence of her god. 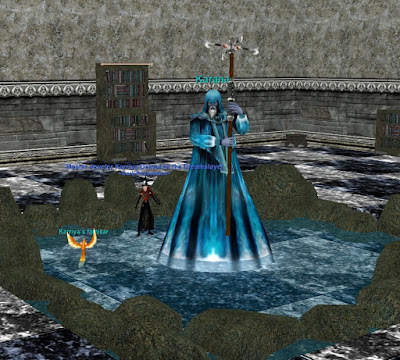 Watch for "The Gods, Part 2" in the coming months! And that won't be the last we hear of the gods of Norrath, I assure you. Karriya does enjoy tangling with them -- got to up that haughtiness rating (and the achievement)!
Posted by Alexa Grave at 1/19/2017 03:39:00 PM