Hell On Wheels, the second title in the Devil Made Me series, is already up on Amazon for pre-order! And I'm guessing some of you might like a taste of what you'll find. Without fail, I have an excerpt below.

I would like to mention my plans for this title quickly, if you'll bear with me (or you can just skip my blather and read the excerpt). As I said above, it's on Amazon right now. If you pre-order, you can nab it for only $0.99. Release day is September 26, 2017, at which time the price will go up to $2.99. It will be available only on Amazon, including in Kindle Unlimited, for three months! On January 2, 2018, Hell On Wheels will be available from the other major online retailers, after a short pre-order period.

The first title in the series, Hell Hath No Fury, will also drop down to $0.99 for a short time starting some time next week! This special price will be available at all the major online retailers. You can find the links on my Devil Made Me series page. If you haven't read it yet, the beginning of October will be the best time to get it at the lower price.

Also keep in mind, you shouldn't be lost in Hell On Wheels if you haven't read the first title. Though I'm sure if you read the second, you'll want to go back and read the first. Moira is a hoot!

OK, OK, here it is, the excerpt from Hell On Wheels... 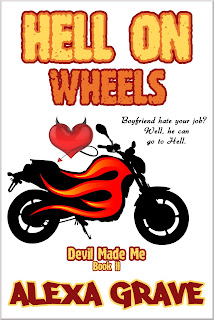 A man in an impeccable gray suit perched on the edge of my desk, legs crossed and a car-salesman smile plastered to his face.

This was my office, damn it. No one allowed unless I said so. "Who the hell are you?"

He chuckled, a controlled and forced sound. "Nice one. I'm Richard, but you can call me Dick." When he extended his hand, it looked too perfect, too practiced.

Dick, huh? This would be fun. I crossed my arms instead of shaking. "We just met -- you should keep the juicy information about your disposition for later."

He dropped his hand. "I assure you, my name is telling, but not in the way you're thinking." The corner of his mouth twitched.

Crap. Someone ready to sling shit back at me. "Well, Dick, I think you took a wrong turn. This is my office."

"No wrong turn, Moira. I'm exactly where I intend to be."

He knew my name, but I'd never seen him before. True, there were many residents even on the second floor, but someone who exuded this much charisma and sleaziness wouldn't have stayed hidden. "When did you arrive here?"

"Oh, I'm not from this floor." The extended word "this" slid over me like an oil slick.

It reminded me of Douglas -- a resident who'd been mistakenly sent to the second floor and had almost killed me... again. Well, maybe his intent hadn't been to kill me, but he sure hadn't wanted to snuggle. Pandora had sent Douglas to his proper floor before Jared or I could rip his creepy throat out. A man I intended to keep in my rear-view for the rest of my unlife.

"You're not from the seventh floor, are you?" I now knew that was where people like murderers and rapists went. That had been my topic of study yesterday. Well, I think it was yesterday...

Dick laughed again, so close to someone saying "ha ha ha." "No, no, of course not. Would you believe the fourth?"

Greed. Seemed to fit. "You weren't by chance a car salesman before you died, were you?"

That fake smile fell off his face for a moment, and then he rallied, grinning bigger than he had before. "Smart."

Smartass -- he'd learn that if he stuck around.

Wait. How'd he get here, anyway? There was supposed to be no floor-to-floor travel. Unless Pandora had deposited him here. Or there was a way that she had yet to tell me.

Sneaky bitch. Jared was right -- Pandora hid things. But I wasn't about to admit it to him, at least not until I uncovered the secrets and confronted the lying wench. If I told him, he'd try to be all chivalrous again, like with Douglas.

I could take care of myself.

First step, don't react to Dick's floor-hopping. He couldn't know Pandora had remained mum on the topic with me. "What brings you from the fourth to the second?"

If possible, his smile grew bigger. How'd he talk like that? "You have something I want."

I giggled, holding back the gut-buster I yearned to unleash. "You want to be a Welcomer? Be my guest." I tossed the sequined horns at him, and he caught them cleanly without looking down.

"Not that job." He quickly tilted his head then righted it.

Nervous tick or display of superiority? I reconsidered the whole fourth-floor declaration. Like Douglas's original assignment to this floor, it didn't seem right. Sure, people were greedy for power. But the desire to become the devil was on a whole 'nother level.

Not to mention, unless Pandora had told him of my impending promotion, he shouldn't have known. The other residents of this floor had poked around my office and asked questions, but I'd brushed them off with that whole wish thing. Told them it made me feel more normal to putter around an office.

Dick stood and smoothed his suit, even though there weren't any wrinkles in it. He straightened his tie, which shifted from a classic black-striped number to tiny flames on a dark gray backdrop, and placed the horns on my desk. "I look forward to the challenge, Moira." Then he strode out as if he already had the position in the bag.

Boyfriend hate your job? Well, he can go to Hell.

Yup, Moira's still dead. And her ex from life, not so much an ex anymore, isn't happy that Moira agreed to take the devil's place once she retires. Makes it kind of hard to while away their unlives on the second floor of Hell.

But Moira's not willing to back out of the deal, stubborn as, well, hell. Even when a sleazy three-piece, supposedly from the fourth floor, demands the job for himself, she refuses to withdraw.

Once Moira uncovers some of Hell's secrets, though, she starts to question her commitment.