I'm rolling into Fall, so I guess it's time again for another writing update! Don't worry, I'm still plugging along, even if I occasionally forget to update the word count meters on my blog. ;)

I last updated in March, so I won't repeat some of the things I mentioned there. You can go wander over and check it out if you'd like, though. Things have been pretty quiet on the publication front, but that just means I've been writing a lot! And other things...

❦ Mind Behind the Mind (Trinity Torn, 1) was sneakily lowered to $2.99 a few months ago. It will go back up to $3.99 soon, so get it for the lower price while you can! Per usual, you can find the availability on the Trinity Torn Series page.

❦ Hell On Wheels (Devil Made Me, 2) is done and ready to go! Yup, rough draft, revision, and edit. It just needs to be formatted, which will be done later this week. It will be available only on Amazon until the beginning of January, at which point it will be at other retailers. You can pre-order Hell On Wheels on September 13 for only 99 cents, but on release day, September 26, it will go up to $2.99! I had tons of fun writing it -- Moira is a riot. Watch the Devil Made Me Series page for cover and blurb coming soon.

❦ Hell Hath No Fury (Devil Made Me, 1) will be on sale for 99 cents in October! I don't have the exact dates planned, but I aim to have the price changed by the beginning of October. Don't wait to snag a copy at that price, though, because it will be back up to $1.99 by November.

❦ Thorns Entwine the Blade (Trinity Torn, 2) is heading into revisions! I completed the first draft at the beginning of June, then I received some feedback. I'm currently doing a bit of prep before I dive into revisions. Re-reading the first book and inputting events into Aeon Timeline. I'm hoping to finish the revision by the end of the year. Still aiming for a 2018 publication date. And... yes, here it is, the first public appearance (after a few tweaks since I sent it out in my newsletter) -- the cover for Thorns Entwine the Blade! 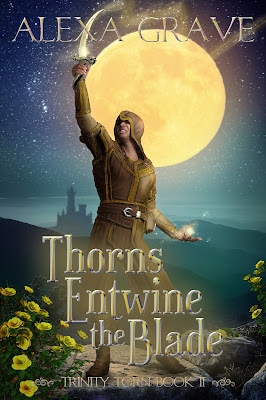 Nothing to announce for changes at this time, as I haven't started up or continued any side projects. Thorns will keep me busy through the end of the year, and I'm hoping to start in on Dead As Dreams revisions afterward (and maybe a very rough beginning draft of the third Trinity Torn novel). We'll see how the rest of the year plays out for those other side projects I've been itching to work on!
Posted by Alexa Grave at 9/07/2017 12:17:00 PM