I said I was going to try this, so here it goes. Hopefully it doesn't all end up too stream on consciousness.

MINI MIND SPLAT WARNING: Nothing I comment on is meant to offend. It's simply my opinion and how I feel about certain things (mostly inconsequential things). I'd love to see thoughts from others in the comments. Just remember, have fun with it. This isn't meant to be super serious. 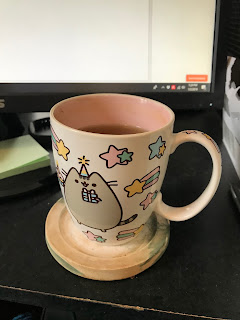 Tea! I love tea. The only time I ever drank coffee was if it had a lot of chocolate and milk in it (and other flavored syrups), so you know, it didn't taste like coffee anymore. I'm a tea person.

Now, I know many people say the only real tea is the loose stuff, or the fresh tea leaves. I'm sure I'd love that, too, but I mostly stick to the teabags, though I've combined some of my own herbal mixes in the past. I guess I'm also pretty picky when it comes to tea as well.

The hot stuff? I prefer green tea. With jasmine or ginseng! I also have been enjoying the chai green tea (more on chai later). I've tried some of the Tazos, and I have this loose blend of chamomile and lavender that's pretty yummy. But let's face it, with kids, writing, and other responsibilities, I usually go for the caffeinated stuff, instead of the herbal stuff. Maybe when I have less of a need to keep my eyes open all damned day I'll go back to experimenting with which herbal teas I like. For all my hot teas, I prefer to add honey to sweeten.

Cold tea? This is mostly the black stuff. Actually, sweet tea is my ultimate favorite tea. I'm a southern girl at heart, even though I've lived in the Midwest my entire life (I love New Orleans, especially, and man have I had some great sweet tea down there).

Sometimes we make our own tea at home with one of those iced tea makers that one of our parents got us for the holidays one year. But as far as the bottled stuff goes, I enjoy Pure Leaf the most. Perfect balance of sugar for me, plus is tastes more natural. I used to love Nestea (Lipton) when I was younger, but now the fake sugar gives me a headache and it just doesn't taste right.

I promised I'd come back to chai. Chai lattes are also a weakness of mine, though I try to resist because I know they have so many more calories even compared to sweet tea. The Oregon Chai brand is so yummy.

Funny thing, though, did you know chai means tea? So it's a tea tea latte. XD I didn't know chai meant tea until a few months ago, but it is rather hilarious. Us silly Americans with the crazy marketing and naming of things. =P

Do you like tea? If so, what kind is your favorite? If not, what do you prefer to drink?