MINI MIND SPLAT WARNING: Nothing I comment on is meant to offend. It's simply my opinion and how I feel about certain things (mostly inconsequential things). I'd love to see thoughts from others in the comments. Just remember, have fun with it. This isn't meant to be super serious. 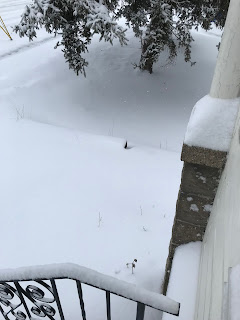 Snow! Who likes it? Who hates it?

I'm kind of in between, but mostly leaning toward the hate it camp.

Preschooler did an awesome job thwarting my plans by goofing around while she was putting her milk in the fridge. Spilled... milk everywhere! In the fridge, outside the fridge, under the fridge, and all over her. Ugh.

Wait, this post isn't about kid roadblocks. It's about snow!

It's kind of interesting, the development of liking or disliking snow. As a kid, I loved it. Making forts in the snow was awesome (forts were more fun than snowmen). It's like the cold and wet didn't phase me in the least.

Then as I grew older, I liked it less and less. I don't want it near me! It's cold and wet and inconvenient. Hell, I'd move down south if I could, but I'm pretty much stuck where the winters are long and cold unless we have a sudden, unexpected windfall (yeah, right).

Unfortunately, my Grade Schooler (almost Middle Schooler!) is already at the point where she's not a fan of the snow. She hates dragging her snow pants to school and dealing with boots. Do kids grow up faster these days or what? Or maybe my perception is just skewed and I don't remember when I actually transitioned from loving to disliking snow. With my memory, it's highly likely.

At least when I send Grade Schooler outside with her younger sister to play in the snow, she does seem to end up having a good time (even though I get grumbles before she gets outside -- heh).

Now, I don't completely hate the snow. I just hate going out in it. You know how many people don't shovel their sidewalks making it super difficult to walk? A lot.

But I'm happy to enjoy its beauty when I'm nice and toasty inside. Especially watching the snow fall at night, it's kind of hypnotizing. And the blanket of unmarred white (before people tromp through it) is definitely pretty. Again, as long as I can enjoy it all from a cozy house, I don't care. I'm also super happy (and super lucky) that Hubbie is the one who snow-blows and shovels.

So, how do you feel about snow? And if you haven't experienced much (or any) snow, what are your thoughts on it? It's hard for me to imagine a winter without snow, so I'm fascinated how those who don't get snow often or at all perceive it.