Summoners War - Look At The Pretties

Yes, I'm still playing Summoners War (and juggling too many accounts). Before I dive into my Water/Light/Dark account, I wanted to show everyone a pretty from one of my other accounts. I recently gathered enough bits to transmogrify someone, and I decided to apply it to Shaina. She's a pretty awesome Mon -- 4-Star Chakram Dancer, but many believe she should be a 5-Star. She especially kicks ass if you pair her with one of her Boomerang Warrior sisters. 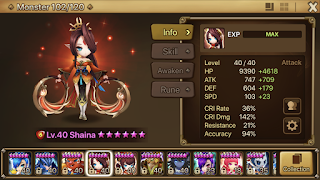 Onto the Water/Light/Dark account, and my poll from the last Summoners War post. It was a tie vote between the Dark Grim Reaper, Thrain, and the Light Living Armor, Silver. So... instead of choosing, I worked on both! Yup, both Mons have been 6-Starred. A lot of work, but I managed to do it and max their levels out as well (skills, not so much -- Thrain is fully skilled, but Silver needs a few more skill-ups).

I worked on Thrain first. He's a bit squishy, unfortunately. But when he does survive, it's fun watching him rain down purple balls of death onto mobs. He's especially fun in Secret Dungeons -- he wipes out the early levels easy peasy. 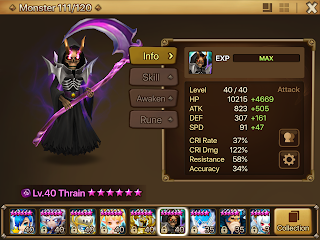 I thought Silver was going to be more fun than he turned out to be. Right now, he doesn't do much damage, and he also seems squishier than he should be (not as squishy as Thrain, though). That might be due to my crappy runes, of course, but I'm still kind of meh over him. Maybe once he's fully skilled and has decent runes I'll have a better opinion of him. 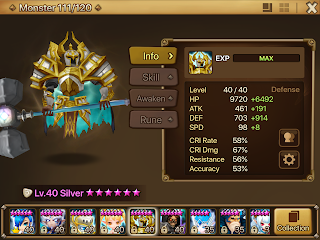 Overall, Shaffron the Light Imp Champion is still my favorite (and Fran the Light Fairy Queen is a close second) of the Light/Dark Mons I've built so far. He is a wicked little Mon and can hold his own pretty well. They recently buffed him, which made him even better. I can't wait until I get enough bits to transmogrify him -- he's first on my list!

As for my goals for the next couple of months, I'm going to take a small break from 6-Starring Mons (even though I have gotten a few new Light/Dark Mons to work on -- including Light Penguin Knight and Dark Mystic Witch). I'm focusing on 5-Starring a few Waters to help more in Tartarus Labyrinth, plus I really need to finish my fusion of the Dark Ifrit, Veromos. Hopefully my next post will include a picture of him and a couple of the Mons that I desperately wanted to 5-Star and kept putting off for all of the 6-Starring.

I did promise one more thing, didn't I? That when I awakened my Water Druid I'd post pictures. You want to see them? He's so wicked cool! Even in his beast form. Happy farming, all! 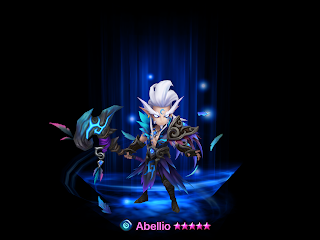 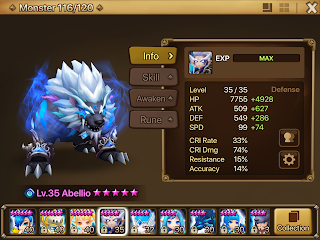