Bytes Bite, And So Do Fairies (Fractured Fairies, 4) - Excerpt

Yes, another release! I've been looking forward to this one. It's almost too fun sometimes to play around with Grinka's life.

Bytes Bite, And So Do Fairies is the fourth published title in my Fractured Fairies series, though you can of course jump in with any story.

Please enjoy the excerpt below. And if you'd like to grab a copy, Bytes Bite is only $0.99 at all major online retailers: Amazon, Barnes & Noble, Kobo, Apple Books, Google Play, Smashwords, and Books2Read (the last will give you retailer options to choose from).

And if you read the entire story, please consider leaving a review at one of the retailers or on Goodreads. Reviews are awesome and helpful and it's one of the best ways to support an author you like. OK, I'll shut up now. Promise. 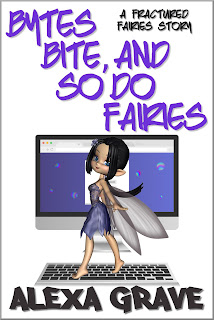 Now, I know how hard it is to succeed as a writer. Most indie authors need to crank out titles on a regular basis to earn any kind of money. So I tucked away a good portion of my tips for advertising over the last few months. I want this to work – no, I need this to work.

The thing is, when I started writing this first novel, it also turned into an outlet for some of my anger. And oh man, do I have a lot of anger. Just ask Syndago. My not-so-giant giant friend is rather sick of replacing light bulbs. Hey, I can’t control my destructive powers well, and the fairies piss me off at least every other second.

Speaking of the fairies... it’s far too quiet in the apartment.

And no, they don’t know what I’ve been up to on the computer. At least I hope not.

Unfortunately, they’ve gotten rather tech savvy lately, somehow getting their grubby hands on a tablet. I’m amazed they haven’t broken it yet. Perpetually drunk, naked fairies are rather clumsy.

I check under my desk, then under my bed, and look out the window for good measure again. Nothing. Maybe Syndago took them to the park. They love to harass the real birds in their pigeon illusions.

The circle continues to spin and spin. What’s a sea nymph got to do to get her noir urban fantasy published? I smash the Enter button a few times, to no avail. Actually, the circle appears to spin slower.

Damned computer. It’s been so twitchy lately. I even checked it several times to make sure the fairies hadn’t poured wine in the vents, though they’d be reluctant to waste their precious booze for such a prank.

Maybe I didn’t kill enough fairies in my novel. Yes, I killed a lot of fairies. So cathartic, especially since I can’t kill them in real life. Trust me, I’ve tried a million times by exploding them into honey-colored bits. They’re as immortal as Syndago and me, sadly.

In my novel, though... burn fairies, burn.

I snicker, and the circle freezes. Then the screen turns black for a second, followed by flashing rainbow colors. “What the–?”

Fairy giggles flitter from my closet.

I wonder if this is what a gnome tripping on unicorn hairs feels like.

As usual, Grinka the sea nymph can’t catch a break. She simply wants to publish her novel. Unfortunately, Tamor and Tamara, the two fairy thorns in her side, mess with her computer. Too bad they’re immortal and can’t meet the same demise as the innumerable fairies in her book.

If that isn’t enough of a plague, Grinka’s sister Raina pops in from the Immortal World, bringing the first immortal virus with her. And now, Grinka is quarantined in her room with the two fairy nitwits.

Will she survive to hit publish, or will the rainbows and fairies win?