Here comes the third release of 2021! This time, I've combined the first six Fortunes of Fate stories into a collection called Dawn of Fate.

Since I've posted excerpts from all six titles in the past, I've included links to those below, instead of offering a new excerpt.

The ebook for Dawn of Fate is only $2.99 (if you bought all six titles separately, it would cost $4.95) and can be found on Amazon, Barnes & Noble, Kobo, Apple Books, Google Play, and Smashwords. Or you can check out Books2Read for the full list of retailer options.

Dawn of Fate is also available in paperback on Amazon for $9.95.

Don't forget to leave a review on your preferred retailer or Goodreads once you've finished reading. It's insanely appreciated. 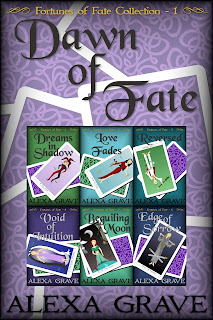 For every card, there’s a story.

The Fool, Two of Cups, The Magus, The High Priestess, The Moon, and Three of Swords – this collection contains their stories.

Jump into the world of Fate, along with the three world-hopping cat sisters. The first six cards in the Fortunes of Fate series have been drawn. What stories do they tell?

Tilly decides on a whim that it’s time for an adventure. Unfortunately, her carefree romp in the world of Fate is cut short by the willful Tillnea.

Caradici’s body flickers in and out of existence, threatening to pull her away from the life she's made. She fears Fate beckons to her, that she must return home to save herself, leaving her love behind.

Cece’s tried to ignore her prophetic dreams all her life – they’ve caused nothing but heartache, starting with the death of her grandmother. But now, she’s dreamt of a lost child.

In a moment of weakness, Erolisi succumbs to her power, feeding her need by drawing life force from her best friend, Aelwyn, and shattering their relationship in the process.

Jasp’s memory of Yetta spurs him to act. Making no promises, he follows Amber to the weeping women in the woods. But it’s not as simple as freeing them. It never is.